ABSTRACT:
The objectives of present investigation were to formulate and evaluate herbal gel for mouth ulcer treatment of dried powdered guava leaves.
Herbal gel was prepared by using different concentration of powdered guava leaves and Carbopol 934, Propylene glycol as a gel base. Formulations were evaluated for various parameters
Infrared spectroscopy revealed that there was no interaction between powdered Guava leaves and Polymer. The formulated gel was transparent, homogeneous and pH ranges from 7 to 7.5. Formulation showed acceptable rheological behaviour with applicable Spreadability and Extrudability properties. Anti-fungal studies of formulations showed excellent efficacy against Aspargiliousaureus, Candida albicans.
From the experimental evidence of invitro studies it was observed that powdered guava leaves contain flavonoids so it showed significant antioxidant effect.
Developed herbal formulation was stable, safe and effective over to synthetic formulations for the treatment of mouth ulcer.

INTRODUCTION:
Gels are typically semi-solid formulations having a liquid phase that has been thickened with other components. Uses of topical gel preparations are for skin application or percutaneous penetration of medicament or local action to certain mucosal surfaces (Singh, 2014). A mouth ulcer is a break or breach in the mucous membrane, which is lines the inside of the mouth. It usually has yellow or white colour and usually looks like a depression in mouth that is the mucous membrane (Dosani, 2011).

The Commercially available gels containing synthetic and semi synthetic active agents which have several disadvantages like staining on the teeth, irritation, and burning sensation only because presence of  high degree of alcohol content and some organic compounds. The present investigation deals with use of herbal powdered Guava Leaves in the treatment of mouth ulcer in pharmaceutical gel.

Commonly known as guava, Peru, Ambrud. A biological source is Psidiumguajava belongings to family Myrtaceae. Chemical composition contains Flavonoids, Triterpinoids, Steroids, Carbohydrates, Oils, Lipids, Glycosides, Alkaloids, Tannins and Saponins. Used as Antioxidant, Antibacterial activity, Anti-inflammatory activity, Anticancer activity (Wang, 2014). Importance of herbal medicine has both medicinal and economical. Although herbal medicines has benefits to increased, their safety, efficiency, quality and importance of industrialized and developing countries. Herbal medicines are getting increasing patient compliance as they are avoiding typical side effects of allopathic medicines. It is no wonder that the world’s one-fourth population i.e. 1.42 billion people, are dependent on traditional medicines for the treatment of various diseases. Medicinal plants have been a major source of cure for human diseases since time immemorial. Recently considerable attention has been paid to utilize bio-friendly and eco-friendly plant based products for the cure and prevention of different diseases, so it is documented that most of the World’s population has taken in traditional medicine. The India offers a variety of plants having medicinal properties. Medicinal plants can be use to find out effective alternative to synthetic drugs (Jadhav, 2015). The use of the medicinal plant based medication is gradually becoming popular throughout the world. Near about half of the world’s, twenty five bestselling pharmaceutical innovator agents are derived from natural products (Das, 2011). The use of medicinal plants as raw materials in the preparation of new drugs is ever increasing because of their potentials and the problem of drug resistance in micro-organisms. Demand for medicinal plants is increasing in both developed and developing countries. Research on herbal medicinal plants is one of the leading areas of research globally (Dwivedi, 2012).

Herbal formulations have now a day’s undergone more thorough investigation for their potential in preventing and cure oral disease (Silva, 2012). Herbs have long been used traditionally for routine cleaning of teeth and dental disease and to treat various oral diseases (Deepa, 2011). Oral diseases like oral cancer, dental caries and periodontal diseases among the most important oral health problems. There is a well-established link between the activities of microbial species that form part of the micro biota of the oral cavity and oral diseases. The big need for alternative treatment, products and prevention options for oral diseases that are safe, economical and effective comes from the rise in disease incidence particularly in developing countries, increased resistance by pathogenic bacteria to currently used chemotherapeutics and antibiotics opportunistic infections in immunocompromized individuals and financial that is economical considerations in developing countries. Moreover, allopathic medicine is too expensive and capital intensive for a developing country like India and has only limited success in the prevention and treatment of oral diseases and periodontal disease. Hence, the plant extracts used in traditional medicine and alternative products continues are considered as good alternatives to synthetic and organic medicine (Nagi, 2015)&(Jose, 2011). The present investigation deals with use of herbal Guava Leaves in treatment of mouth ulcer in pharmaceutical gel.

Materials and methods:
The fresh plant materials of Psidiumguajava were collected from local area from Agricultural farmhouse (Karad, Satara district). Fresh plant leaves were washed under running distilled water as well as tap water and shade drying was carried out. The collected plant was authenticated at Department of Botany, Yashwantrao Chavan College of Science Karad. All other ingredients of analytical grade purchased from Loba Chemicals Mumbai.

Preparation of herbal Gel:
Specified amount of Carbopol 934 was dispersed in required amount of distilled water with continuous stirring. 5 ml of distilled water was taken and required quantity of methyl paraben and propyl paraben were dissolved by heating on water bath after cooling propylene glycol was added. Further varying concentration of Psidiumguajava powder was mixed to the above mixture and volume was made up to 20 ml with distilled water. Finally full mixed ingredients were mixed properly to the Carbopol 934 gel with continuous stirring and triethanolamine was added drop wise to the formulation for adjustment of required pH (6.8-7) (Das, 2010).

The composition of herbal gel prepared from the powdered guava leaves coded as G1, G2, and G3 is tabulated in Table 1.

Physical Appearance:
Physical parameters such as appearance and colour were checked.

Spreadability:
Spreadability was determined by glass slide and wooden block apparatus. Weights about 20 gm were added to the pan and the time were noted for upper slide to move to separate completely from the fixed slide (Shivhare, 2009). An excess amount of gel 2 gm under study was placed on this ground slide. The gel was then sandwiched between this slide and another glass slide having the fixed ground slide and there is provided with the hook. A 1 kg weighted was placed on the top of the slides for 5 minutes to provide a uniform film of the gel and remove air between the slides. Excess of the gel was removed off from the edges. The top plate was then subjected to pull with the help of string attached to the hook and the time in seconds required by the top slide to cover a distance of 7.5 cm be noted. A shorter or less interval indicates better Spreadability. Spreadability of gel was calculated using the following formula (Pawar, 2013). Spreadability of gel was reported in table no 2.

S = M × L / T
Where, S = Spreadability,
M = Weight in the pan which is tied to the upper slide,
L = Length moved by the glass slide
T = Time in second taken to separate the slide completely each other.

Viscosity:
Viscosity was determined by using Brookfield viscometer (DV-III programmable Rheometer). Formulated gels were tested for their rheological behaviors at 250C. The measurement was made over range of speed from 10rpm to 100rpm with 30seconds between 2 successive speeds and then in a reverse orders (Bhramaramba, 2015).

Extrudability:
The gel formulations were filled in standard capped collapsible aluminium tubes and sealed to the end. The extrudability was determined by pressing of the thumb.

Clarity:
The clarity of all the three batches was determined by visual inspection (Pandey, 2011).

Bioadhesive Strength:
Bioadhesive strength was determined by using glass slide and wooden block apparatus. Bioadhesive strength used to measuring the force required to detach the formulation from cellophane membrane. Specified amount that is 1 gm of prepared gel was taken on glass slide wrapped with cellophane membrane. Intimate contact was provided by the movable glass slide was placed on fixed slide. Two minute contact time was given to ensure intimate contact between formulation and membrane. The weight was added in the pan which is provided to apparatus until slides got detached. The bioadhesive force, expressed as the detachment stress in dyne/cm2 was determined by the formula (Jaiswal, 2012). Bioadhesive strength was reported in table no 3.
Detachment stress = m•g/A
Where,
m = Weight required to detach two glass slides from each other (gm).
g = Acceleration due to gravity i.e 980 cm/s2.
A = Area of membrane exposed (cm2).

Stability study:
Stability studies were done with open and close container. Here, by subjecting the product to room temperature for 1 month (Kaur, 2013)&(Allen L). Stability study was reported in table no 3.

The antifungal test was performed using the agar well diffusion
Prepared nutrient brought and poured in to sterile petri plates and kept for drying and cooling. After that each bacterial culture were spread by micron wire loop. A sterile cork borer 6 mm diameter was used to drill holes 4 mm deep. Then 0.5 gm of gel from each batches add in to this holes. Plates were then incubated at 270C for 48 hr. The zone of inhibition (diameter in mm) developed, if any, was then measured for the particular compound with each fungal strength (Koland, 2011).

Antifungal studies were reported in table no. 4.

In-Vitro anti-oxidant study of Powdered Guava Leaves:
DPPH Assay-
1, 1-Diphenyl-2-picryl-hydrazyl (DPPH) free radical scavenging activity:
The free radical scavenging activity of powdered guava leaves was measured by DPPH assay. This methodology was described by Blois in 1958 where in that bleaching rate of the stable free radical, DPPH. In its radical from DPPH absorbed at 517 nm, but upon reduction by an antioxidant or a radical species its absorbance decreases. 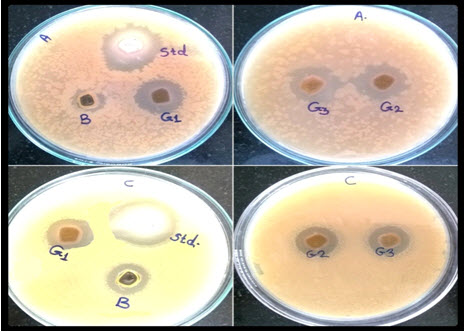 From the results it is clearly shows that all the prepared gel formulations having good homogeneity and gelling property (Gupta, 2010). The pH of all gel formulations was in the range compatible with normal pH range of the skin (Sanghavi, 1989). The rheological behavior was studied with rheometer ranging between 2.292 to 3.111 Pa.S. Which is indicated that formulated gel was neither too thick and nor too thin (Bhramaramba, 2015). The study of Spreadability shows that with increasing the viscosity of formulation Spreadability decreases and vice versa (Shivhare, 2009). Extrudability study was done by pressing thumb and it’s easily extendable.   The gelling & bioadhesive strength of all the batches was found in the suitable range (Jaiswal, 2012). 1 Month stability study was done with open and close container and it’s showed that open container containing gel was not stable and close container gel was stable. Formulated gel containing open container when expose to ambient room temperature then syneresis was observed it means liquid exudates separating (Kaur, 2013). Syneresis occurs when the interaction between particles of the dispersed phase becomes so great that on standing. In that dispersing medium is squeezed out in droplets forms and the gel shrinks. Syneresis it means the form of instability in aqueous gels. In syneresis system separation of a solvent phase is occur only because of the elastic contraction of the polymer means polymeric molecules (Allen L). Infrared spectra of gel formulations did not show the presence of any additional peaks so infrared spectroscopy revealed that there was no interaction between powdered Guava leaves and polymer. Infrared spectra have shown groups 2925.48- CH, 476.93- Hematite, 1717.3- C˭O, 1187.46, 1187.72- C-O.The major peaks of drug spectra remained unchanged in the mixture were observed in Infrared spectra. All the three batches of developed formulation showed antifungal activity against Aspargiliousaureus& Candida Albicans this are main microorganism responsible for mouth ulcer and formulation it can also use to treat mouth ulcer infection (Koland, 2011). A further DPPH assay study it was observed that powdered guava leaves contains flavonoids so it showed significant antioxidant effect (Blois, 1958)&(Mathangi, 2013).