ANALYTICAL TECHNIQUES FOR ANALYSIS OF INORGANIC ELEMENTS – A REVIEW


ABSTRACT
To make drugs serve their purpose various chemical and instrumental methods were developed and regular intervals which are involved in the estimation of drugs. A photoelectric flame photometer is a device used in inorganic chemical analysis to determine the concentration of certain metal ions, among them sodium, potassium, lithium, and calcium. Group 1 and Group 2 metals are quite sensitive to Flame Photometry due to their low excitation energies [1].These pharmaceuticals would serve their intent only if they are free from impurities and are administered at appropriate amounts [2] . These pharmaceuticals develop  impurities at various stages of their development, transportation and storage which makes the pharmaceuticals risky to be administered thus they may be detected and quantified. For this analytical instrumentation and methods play important role. This review highlights a variety of analytical techniques for analysis of inorganic elements. Analytical techniques for analysis of inorganic elements. The most commonly used techniques for the determination of inorganic elements is atomic spectroscopy the different branches of atomic absorption spectroscopy are(1) flame photometry or flame atomic emission spectrometry. (2) atomic absorption spectrophotometer, (aas). (3) inductively coupled plasma-atomic emission spectrometry (icp-aes).(4)  uv - visible    spectrophotometer.

Photoelectric flame photometry
Principle:
Photoelectric flame photometry, a branch of atomic spectroscopy is used for inorganic chemical analysis .The basis of flame photometric working is that  metals are dissociated due to the thermal energy provided by the flame source. Due to this thermal excitation, some of the atoms are excited to a higher energy level where they are not stable.  The subsequent loss of energy results  movement of excited atoms to the low energy ground state with emission of some radiations, which can be visualized in the visible region of the spectrum. The absorbance of light due to the electrons excitation can be measured by using the direct absorption techniques while the emitting radiation intensity is measured using the emission techniques. 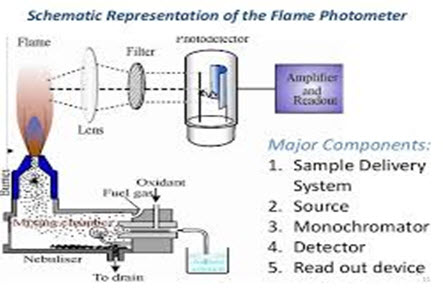 Source of flame
A burner that provides flame and can be maintained in a constant form and at a constant temperature.

Total consumption burner:  In this sample is aspirated through a capillary by the high pressure of fuel &oxidant & burnt at the tip of the burner.

Laminar flow burner: In this ,the sample solution,fuel,oxidant are mixed before they reach the burner tip. Only few droplets of uniform size reaches the flame& remaining are drained out.

Nebuliser and mixing chamber : Helps to transport the homogeneous solution of the substance into the flame at a steady rate.

Optical system (optical filter):
The optical system comprises three parts: convex mirror, lens and filter. The convex mirror helps to transmit light emitted from the atoms and focus the emissions to the lens. The convex lens help to focus the light on a point called slit. The reflections from the mirror pass through the slit and reach the filters. This will isolate the wavelength to be measured from that of any other extraneous emissions. Hence it acts as interference type color filters.

Mechanism of working Nebulisation:
The solution of the substance to be analyzed is first aspirated into the burner, which is then dispersed into the flame as fine spray particles.   A brief overview of the process:
1.  The solvent is first evaporated leaving fine divided solid particles.
2.  This solid particles move towards the flame, where the gaseous atoms and  ions are  produced.
3.  The ions absorb the energy from the flame and excited to high energy levels.
4. When the atoms return to the ground state radiation of the characteristic  element is emitted.
5. The intensity of emitted light is related to the concentration of the element.

The various processes in the flame are discussed below:
• Desolvation: The metal particles in the flame are dehydrated by the flame and hence the solvent is evaporated.
• Vapourisation: The metal particles in the sample are dehydrated. This also led to the evaporation of the solvent.
•    Atomization: Reduction of metal ions in the solvent to metal atoms by the flame heat.
•  Excitation: The electrostatic force of attraction between the electrons and nucleus of the atom helps them to absorb a particular amount of energy. The atoms then jump to the exited energy state.
• Emission process: Since the higher energy state is unstable the atoms jump back to the stable low energy state with the emission of energy in the form of radiation of characteristic wavelength, which is measured by the photo detector.

APPLICATIONS
• Flame photometer has both quantitative and qualitative applications
• Flame photometer with monochromators emits radiations of characteristic wavelengths which help to detect the presence of a particular metal in the sample.
• This help to determine the availability of alkali and alkaline earth metals which are critical for soil cultivation.
•  In agriculture, the fertilizer requirement of the soil is analyzed by flame test analysis of the soil.
•  In clinical field, Na+ and K+ ions in body fluids, muscles and heart can be determined by diluting the blood serum and aspiration into the flame.
•  Analysis of soft drinks, fruit juices and alcoholic beverages can also be analyzed by using flame photometry.

ATOMIC ABSORPTION SPECTROCOPY
The process by which unexcited atoms in a flame, furnace or plasma absorb characteristic radiation from a source and attenuate the radiant power of the source.
PRINCIPLE
Atomic-absorption spectroscopy[4]quantifies the absorption of ground state atoms in the gaseous state . The atoms absorb ultraviolet or visible light and make transitions to higher electronic energy levels. The analyte concentration is determined from the amount of absorption.