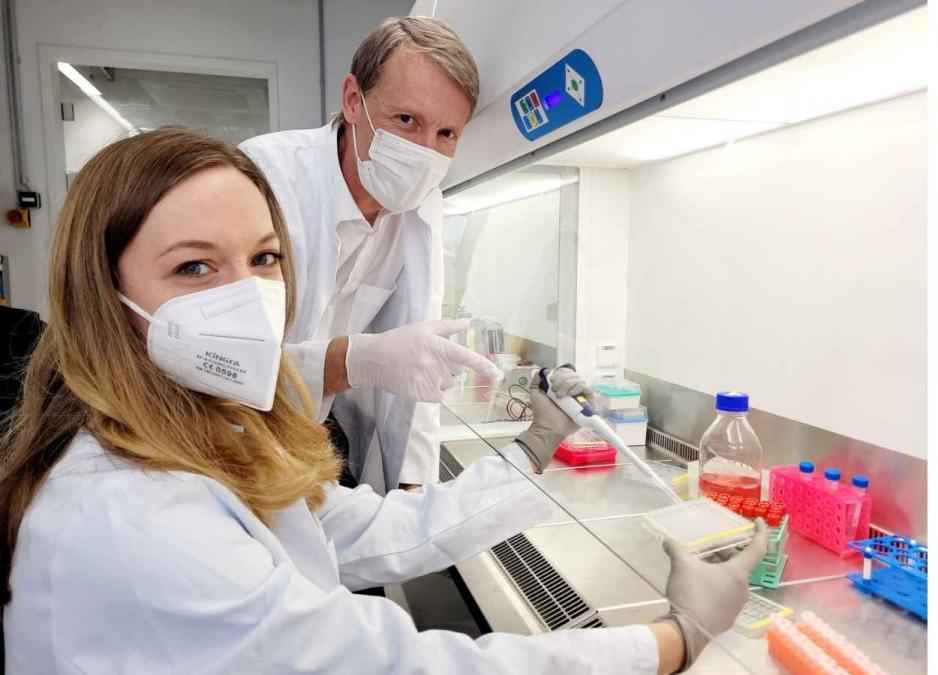 The ongoing SARS-CoV-2 pandemic has caused an imminent urge for both antiviral therapeutical drugs and vaccines. While the development of vaccines was accomplished in a remarkably short timeframe, the identification of direct antiviral treatments has progressed comparatively slowly. In the light of the further risk of pandemics in the future, however, there remains need for direct antiviral drugs and treatments. Moreover, emerging immune-evasive, I.e. camouflaged from the immune system, SARS-CoV-2 variants are of concern. These cause high numbers of infections even in a highly immunized population, underscoring the continuing need for effective antiviral drugs to treat COVID-19.

SARS-CoV-2 belongs to the genus Betacoronavirus. Like other members of this genus, SARS-CoV-2 is equipped with several molecular tools that allow it to evade recognition by the immune system. The virus carries the information to produce a series of proteins, capable of inhibiting antiviral recognition systems of the infected cell. Actually, these systems could identify viral genetic material (here: Ribonucleic acids/RNAs) and sound the alarm. Proteins of SARS-CoV-2 can alter viral ribonucleic acids in a way, that they become indistinguishable from endogenous RNA.

Camouflage protects virus from immune system
For example, viral RNAs are masked by the addition of a methyl group. In this way, the viral RNA escapes early recognition by the central antiviral immune-receptor RIG-I. This receptor normally induces a so called innate immune response in which antiviral active proteins, cell signals and messenger substances - such as type I interferon (IFN) - are generated.

"A robust, early type I IFN production is key to clearing SARS-CoV-2 infection. Its absence is associated with disease progression and the development of severe COVID-19," Prof. Dr. Eva Bartok from the Institute of Clinical Chemistry and Clinical Pharmacology at the University Hospital Bonn (UKB) explained. The PhD Student and first author Samira Marx added, "The activation of an innate antiviral response, including the release of type I and type III IFNs, is also extremely important for the development of an appropriate antiviral adaptive immune response." The adaptive immune response occurs only after a few days and involves the activation of further immune cells and ultimately the production of antibodies.

The immune receptor RIG-I has previously been identified as a suitable target for prophylactic triggering of antiviral effects. For example, mouse models have shown that prophylactic stimulation of RIG-I can protect mice from lethal influenza virus infection. “Such RIG-I stimulating RNAs that mimic viral RNA can be chemically synthesized and used as therapeutics to turn the innate immune response against numerous illnesses including cancer and viral infections,” said Prof. Dr. Martin Schlee from the Institute of Clinical Chemistry and Clinical Pharmacology. In the present study, the scientists analyzed the effect of synthetic 5’triphopsphorylated dsRNA (3pRNA) on the course of infection with SARS-CoV-2 in a mouse model.

Mouse model to resemble human COVID-19 infection
As mice are generally not susceptible to SARS-CoV-2, the researchers had to use genetically adapted mice, able to generate the SARS-CoV-2 binding protein Angiotensin Converting Enzyme 2 (ACE2). “The mouse model we used recapitulates key aspects of the human COVID-19 disease,” added Prof. Hiroki Kato from the Institute of Cardiovascular Immunology at the UKB.

Using this model, the researchers of the University Hospital Bonn could show that a systemic application of 3pRNA, one to seven days prior to infection with SARS-CoV-2, drastically reduced the proportion of lethal infections. A similar observation was made for therapeutic application of 3pRNA, one day after infection. “Our findings clearly show that targeting RIG-I, both in a prophylactic and a therapeutical manner, is a promising approach in the treatment of COVID-19. However, prior to application in humans, further studies need to be conducted,” summarized Prof. Gunther Hartmann from the Institute of Clinical Chemistry and Clinical Pharmacology and speaker of the Cluster of Excellence ImmunoSensation2.

PhD student Samira Marx and Prof. Dr. Gunther Hartmann - of the Cluster of Excellence ImmunoSensation2 at the University of Bonn in the lab.
Photo : David Fußhöller