(b) Combinatorial lead optimization of a Neuropeptide-FF antagonist
Neuropeptide-FF (Phe-Leu-Phe-Gln-Pro-Gln-Arg-Phe-NH2) has been identified as a high affinity ligand for a G-protein coupled receptor HLWAR 77. It is an anti-opioid and has been implicated in pain modulation, morphine tolerance, and morphine abstinence. Centrally administered Neuropeptide-FF also has been known to precipitate Quasi-      Morphine Abstinence Syndrome (QMAS) in opiate-naive animals. Therefore, antagonist of Neuropeptide-FF may allow easier management of withdrawal symptoms that adversely affect the treatment of opiate abuse.

Desaminotyrosyl-Phe-Leu-Phe-Gln-Pro-Gln-Arg-NH2, the first antagonist of Neuropeptide-FF was discovered but this analogue does not show any CNS bioavailability after systemic administration and, thus could not be considered as a potential lead compound. Derivatization with 5-(dimethylamino)-1-naphtha-lenesulfonyl (dansyl) at the secondary amino group of the N-terminal proline residue of the tripeptide Pro-Gln-Arg-NH2, obtained from the sequence of Neuropeptide-FF, has afforded an antagonist with significant lipid solubility to cross the BBB.

For a combinatorial optimizationto improve potency, libraries focused on the possible replacement of the proline and glutamine residues of this lead compound were obtained by a solid phase split and mix method using coded amino acid as building blocks. After screening for competitive binding against a radioiodinated Neuropeptide-FF analogue,  5-(dimethyl-amino)-1-naphthylene sulfonyl-Gly-Ser-Arg-NH2 (dansyl-GSR-NH2) has emerged as one of the compounds having high affinity to the Neuropeptide-FF receptor and over with a moderate increase in CNS penetration power compared to lead compound. 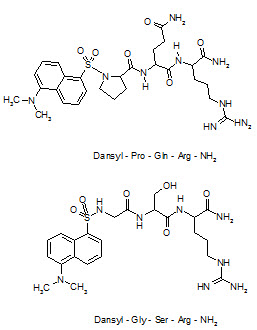 (c) Generation of a benzodiazepine library

The seminar work of Ellman on solid phase synthesis of 1,4-benzodiazepine lays the ground work for creation of small molecules library and is considered as one of the most advancements in medicinal chemistry and represents the first example of the application of combinatorial organic synthesis to non polymeric organic compounds.

The benzodiazepines were synthesized on a solid support by the connection of three building blocks, and of different chemical families.

Components of a benzodiazepine library

Synthesis of benzodiazepine library:
1) Following the attachment of 2-aminobenzophenone hydroxy or carboxy derivative to the support using an acid cleavable linker [(N-hydroxymethyl) phenoxy-acetic acid], the N-protecting group is deblocked (piperdine/DMF).
2) The weak nucleophilic amine is acylated with an α-Fmoc-protected amino acid fluoride, using 4-methyl-2,6-di-tert-butylpyridine as an acid scavenger.
3) Fmoc deprotection followed by treatment with 5% acetic acid in DMF, causes the general cyclizationto the intermediate lactam.
4) Capitalizing on the ability of lithiated 5-(phenyl methyl)-2-oxazolidinone to selectively deprotonate the anilide NH2, alkylation was achieved with a variety of alkylating reagents. Aqueous acid cleaves the new benzodiazepine from the support in very high overall yields. 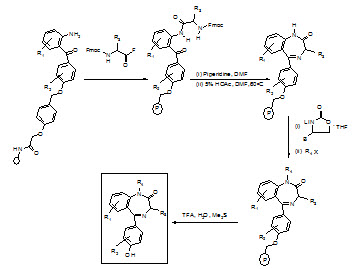 The H3 receptors are primarily located in the CNS in a presynaptic receptor that modulates the production and release of histamine.  Blockade of this receptor leads to increased level  of histamine and other neurotransmitters throughout  the brain via effects on the pre and post synaptic H3 receptors. The wide distribution of H3 receptor in the mammalian CNS indicates a physiological role for this receptor. Therefore, its th erapeutic potential as a novel drug development target has been proposed for indications associated with neurological disorders such as Alzheimer’s disease, Parkinson’s disease and epilepsy, as well as metabolic disorders such as obesity.

A series of biaryl derivatives has been investigated to develop selective H3 blocker. A small library of 49 biphenyl-O-propylamine amides (a) were synthesized as singletons in solutions; the resulting products were purified using high throughput HPLC-MS techniques and assayed in a binding experiment using cloned human H3  and rat cortex H3 receptors. A number of potent inhibitors were found, one most potent being (b), was demonstrated excellent selective towards H3 receptors. 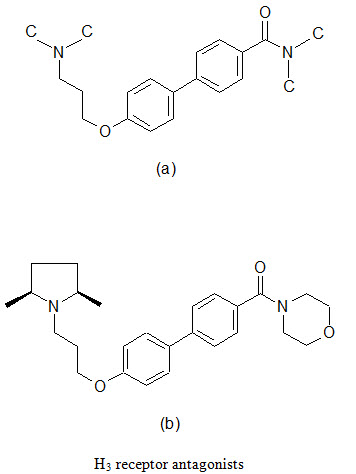 (e) Combinatorial lead optimization of dihydro-folate reductase inhibitor
The spread of antibiotic resistance has reached a larming proportions in some species, and one of the most worrying trends is the increasing incidence of methicillin resistant  S.aureus in hospitals and multiresistant  S. pneumoniae in the community. Therefore, there is an urgent need for effective antibacterial agents to treat infections caused by these organisms. The enzyme dihydrofolate reductase (DHFR) has been established in the clinic as a proven target for chemotherapy. The DHFR inhibitor Trimethoprim was introduced primary for the treatment of community-acquired infections and urinary track infections, with emphasis on gram-negative pathogens. The enzyme remains an under-exploited target in the antibacterial field and now optimization of inhibitors against gram-positive pathogens has been performed. Recent work has been conducted for improving the pharmacokinetic properties of DHFR inhibitors.

A library of 1392 compounds was synthesized in solution. The compounds were evaluated for inhibition of human DHFR and the bacterial enzymes from TMP-sensitive  S. aureus  and TMP-resistant  S. pneumoniae . Several potent inhibitors were found, with one of the most potent compound (b) possessing IC50 value of 42 nM against  S. aureus  and 550 nm against S. pneumonia. 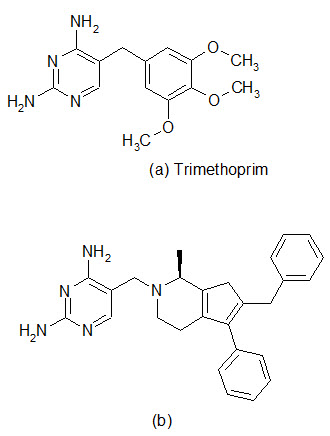