Combinatorial technologies provided a possibility to produce new compounds in practically unlimited number. New strategies and technologies have also been developed that made possible to screen very large number of compounds and to identify useful components of mixtures containing millions of different substances. Instead of preparing and examining a single compound, families of new substances are synthesized and screened. In addition, combinatorial thinking and practice proved to be useful in areas outside the pharmaceutical research Such as search for more effective catalysts and materials research. Combinatorial chemistry became an accepted new branch within chemistry.
The aim of this project is to provide a basic introduction to the field of combinatorial chemistry describing the development of major techniques and some applications.

INTRODUCTION
Combinatorial chemistry is a collection of techniques which allow for the synthesis of multiple compounds at the same time.  [Leard L. & Hendry A. (2007)]13

This nascent technology already produced more new compounds in just a few years than the pharmaceutical industry did in its entire history. Combinatorial chemistry has turned traditional chemistry upside down. It required chemists not to think in terms of synthesizing single, well-characterized compounds but in terms of simultaneously synthesizing large populations of compounds.  [Miertus S. et al. (2000)]14

Combinatorial chemistry is one of the important new methodologies developed by researchers in the pharmaceutical industry to reduce the time and costs associated with producing effective and competitive new drugs.

By accelerating the process of chemical synthesis, this method is having a profound effect on all branches of chemistry, but especially on drug discovery. Through the rapidly evolving technology of combinatorial chemistry, it is now possible to produce compound libraries to screen for novel bioactivities. This powerful new technology has begun to help pharmaceutical companies to find new drug candidates quickly, save significant money in preclinical development costs and ultimately change their fundamental approach to drug discovery.  [combichemistry.com]2

This branch of chemistry is very young, but in this short time it has had profound effects. This can be seen by its impact on medicinal chemistry and, in particular, the drug design process. Traditionally, potential lead compounds were synthesized one at a time. The biological activity of this compound was assayed, and the results would be reflected in the next round of design. This traditional method was useful, but time consuming and expensive. Computational chemistry led to more rational design of compounds to be tested, and high throughput screening led to quick in vitro assays. Synthesis of one compound at a time could no longer keep up, and thus became the rate limiting step in the process. Combinatorial chemistry was the solution to this problem. In combinatorial approach, one can cover many combinations An x Bn in one reaction Instead of doing multiple A x B type reactions.

Hence, In combinatorial chemistry, large numbers of compounds are made at the same time in small amounts, forming libraries which can be assayed for desired properties all at once. Finally the active compound is identified and made in quantity as a single compound. [Leard L. & Hendry A. (2007)]13

COMBINATORIAL CHEMISTRY APPROACH
Combinatorial chemistry may be defined as the systematic and repetitive, covalent connection of a set of different “building blocks” of varying structures to each other to yield a large array of diverse molecular entities.  [Pandeya S.N. and Thakkar D. (2004)]16

Combinatorial chemistry encompasses many strategies and processes for the rapid synthesis of large, organized collections of compounds called libraries. The collection is then tested for the biological activity. Finally the active compound is identified and made in quantity as a single compound.  [Lather V. et al. (2005)]12

Thus the combinatorial chemistry approach has two phases:
1. Making a library.
2. Finding the active compound. Screening mixtures for biological activity has been compared to finding a needle in a haystack.  [Patel R. (2008)]17

In the past, chemists have traditionally made one compound at a time. For example compound ‘A’ would have been reacted with compound ‘B’ to give product ‘AB’, which would have been isolated after reaction work up and purification through crystallization, distillation or chromatography.

In contrast to conventional approach, combinatorial chemistry offers the potential to make every combination of compound ‘A1’ to ‘An’  with compound ‘B1’ to ‘Bn’

Figure -1. Comparison of Tradition and Combinatorial Strategies in Drug Design

The range of combinatorial techniques is highly diverse, and these products could be made individually in a parallel or in mixtures, using either solution or solid phase techniques. Whatever the technique used the common denominator is that productivity has been amplified beyond the levels that have been routine for the last hundred years. [combichemistry.com/principle.html]18

The development of new processes for the generation of collection of structurally related compounds (libraries) with the introduction of combinatorial approaches has revitalized random screening as a paradigm for drug discovery and has raised enormous excitement about the possibility of finding new and valuable drugs in short times and at reasonable costs. 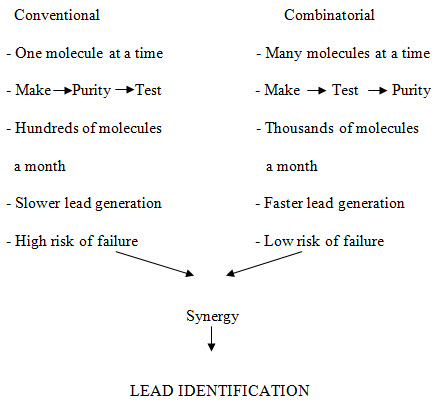 DISADVANTAGES
(1)  Though combinatorial chemistry would solve all the problems associated with drug discovery, one still needs to synthesize the right compound.
(2) There is a limit to the chemistry you can do when using solid phase synthesis. The resin you use is often affected by the reaction types available and care must be taken so that the attachment of the reagent to the substrate and bead are unaffected. Each reaction step has to be carefully planned, and often a reaction isn't available because the chemistry affects the resin.
(3) While a large number of compounds are created, the libraries created are often not focused enough to generate a sufficient number of hits (Library components whose activity exceeds a predefined, statistically relevant threshold) during an assay for biological activity. There is a great deal of diversity created, but not often a central synthetic idea in the libraries. One can argue that there should be a focus on the type of molecule developed in order to maximize hits.
[Leard L. & Hendry A. (2007)]13

HISTORICAL DEVELOPMENT
Combinatorial chemistry is a very young science, having only been around for approxi-mately 20 years. It has been applied to drug design for an even shorter period of time.  [Leard L. & Hendry A. (2007)]13

The origins of combinatorial chemistry can be traced back at least as far as 1963, when biochemistry professor R. Bruce Merrifield of Rockefeller University, New York City, developed a way to make peptides by solid-phase synthesis.  [Borman S. (1998)]1

For his work on solid-phase synthesis, Bruce Merrifield won the Nobel Prize in chemistry in 1984. During this time, automated peptide synthesizer technology was in its infancy, and the preparation of individual peptides was a challenge. [Kim S. (2005a)]9

The field in its modern dimensions only began to take shape in the 1980s, when in 1984 research scientist H. Mario Geysen, now at Glaxo Wellcome, Research Triangle Park, N.C., developed a technique to synthesize arrays of peptides on pin-shaped solid supports in and in 1985 Richard Houghten developed a technique for creating peptide libraries in tiny mesh "tea bags" by solid-phase parallel synthesis.  [Borman S. (1998)]1

Another early pioneer was Dr. Árpád Furka who introduced the commonly used split-and-pool method in 1988, which is used to prepare millions of new peptides in only a couple of days and also for synthesizing organic libraries.   [Kim S. (2005a)]9

Through the 80’s and into the early 1990’s, combinatorial chemistry was focused on peptide synthesis and later oligonucleotide synthesis. [Leard L. & Hendry A. (2007)]13

In the 1990s, the focus of the field changed predominantly to the synthesis of small, drug like Organic com-pounds and many pharmaceutical companies and biotechnology firms now use it in their drug discovery efforts. [Mishra A.K. et al. (2010)]17