A REVIEW ON CHALCONES SYNTHESIS AND THEIR BIOLOGICAL ACTIVITY

ABSTRACT
Chalcones are a valuable molecule of medicinal importance due to presence of reactive ketoethylenic group –CO–CH=CH–, belonging to the flavonoid family. These reactive α,β-unsatutated keto function in chalcones are  responsible for their biological activity. Chalcone can be synthesized by several methods using aldehydes and ketones as starting material. This review is focused about different methods of synthesis and versatile biological activity of chalcones including antimicrobial, anticancer, antioxidant, antimalarial, antituberculosis etc.

INTRODUCTION
Chalcone is an α,β- unsaturated ketone and central core for a variety of important biological compounds, which are known as chalcones. Benzylideneacetophenone is an important member of the chalcone series. Chemically these are 1,3-diphenyl-2-propene-1-one, in which two aromatic rings are linked by a three carbon keto-ethylinic system. Chalcones are also present in nature and can be obtained from plant species like Angelica, Glycyrrhiza, Humulus and Scutellaria, which are widely used as traditional folk remedies. Chalcones are an important intermediates for the biosynthesis of flavonoids. Besides the biological activity of chalcones like anti-inflammatory, antimitotic, anti-leishmanial, anti-invasive, anti-tuberculosis, anti-fungal, anti-malarial, anti-tumor, and anti-oxidant it is also recognized for its synthetic utility to prepare pharmacologically-interesting heterocyclic systems like pyrazolines, which have also been largely studied owing to their pharmacological activities, includes anti-tumor anti-inflammatory, anti-parasitary, anti-depressive, anticonvulsant, antimicrobial, antinociceptives and nitric oxide synthase inhibitors. 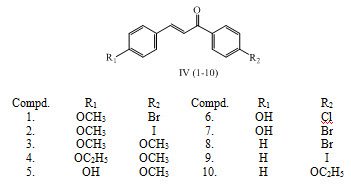 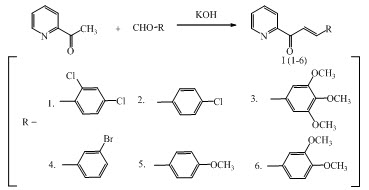 Chalcones IX were synthesized by Claisen-Schimdt condensation of aromatic aldehydes with    o-hydroxy acetophenone. Chalcone on reaction with catalytic amount of I2 in DMSO gave Flavones having antimicrobial activity. (Rathore et al., 2015) 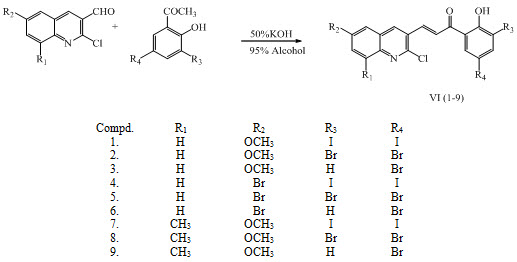 A series of chalcones III (1-11) having antimicrobial activity was prepared by Claisen-Schmidt condensation of acetophenones with aromatic aldehydes in the presence of aqueous solution of potassium hydroxide and ethanol at room temperature. (Tiwari et al., 2010)

A series of chalcones II (1-9) was synthesized by reacting 1-(4-isobutylphenyl) ethanone with different substituted aldehyde by Clasien-Schimidt condensation having antibacterial and antifungal activity. (Turkar et al., 2010)

Venkatesh and his co-workers have reported the synthesis of novel series of 5-[1,3-bis (4- substituted phenyl) prop-2-en-1-ylidene]-2-thioxodihydropyrimidine-4,6(1H, 5H)-diones X, XI, XII. The target compounds were synthesized by the Knoevenagel condensation of different chalcones with thiobarbituric acid using acetic acid as a catalyst in ethanol. These compounds have been found to exhibit antimicrobial activity. (Venkatesh et al., 2016)

3,5-bis-(4-hydroxy-3- methoxybenzylidene-N-phenylpiperidine-2,6-diones XIII (1-10) were synthesized by the subsequent condensation of N-phenyl glutarimides with 4-hydroxy-3-methoxy-benzaldehyde in presence of neutral alumina by an efficient microwave supported solvent free synthesis. The compound exhibited antifungal activity. (Dhivare and Rajput, 2016)

Chalcones XVII (1-5) were synthesized via reaction between 1-(2,6-dichloro-4-trifluoromethyl-phenyl)-pyrolidine-2, 5-dione, 1-(2, 6-dichloro-4-trifluoromethyl-phenyl)-piperidine-2, 6 dione and substituted aromatic aldehydes in presence acetic acid. The synthesized compounds were evaluated for their antimicrobial activities. (Rajput and Sayyed, 2017)

Chalcone as an anticancer agent A series of 2’,5’-dialkoxyl chalcones XVIII (1-10) was prepared by Claisen–Schmidt condensation of appropriate acetophenones with suitable aromatic aldehyde. These synthesized compounds were found to act as anti-tumor and cancer chemopreventive agents. (Cheng et al., 2008) 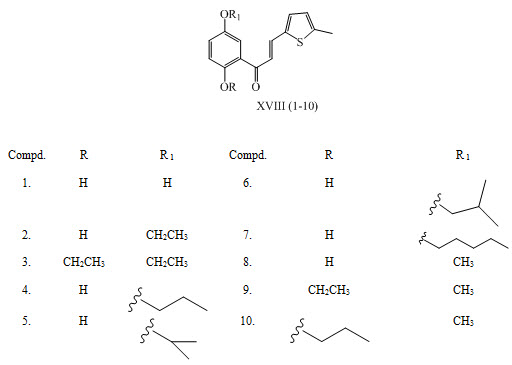 Cesar Echeverria and his co-workers have studied relationships between the structural characteristic of synthetic chalcones XIX (1-4) and their antitumoral activity. (Echeverria et al., 2009) 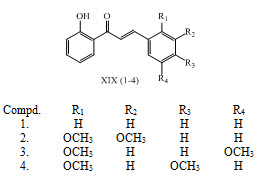 A new series of quinolinyl chalcone derivatives XX was synthesized by the reaction of quinolinyl and chloroquinolinyl acetophenones with substituted aromatic aldehydes as anticancer and anti-inflammatory agent. (Kotra et al., 2010)

A novel quinazolinone-chalcone derivative XXXI was synthesized by the reaction of benzaldehyde and acetophenone in presence of barium hydroxide and evaluated for their anticancer potential. (Wani et al., 2015) 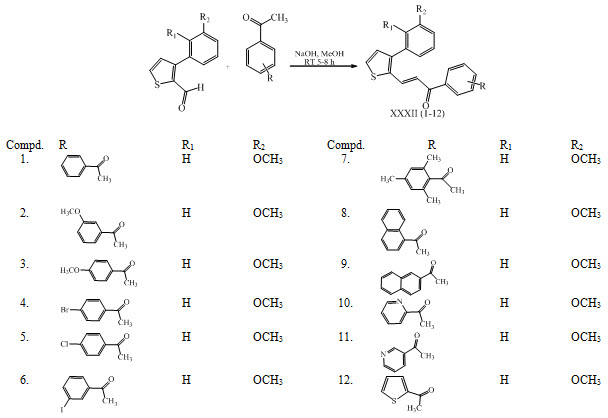 Tuong-Ha Do and his co-workers have prepared some heterocyclic chalcones XXXIII having cytotoxic activity. (Do et al., 2016) 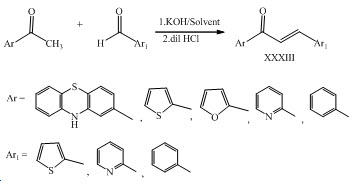 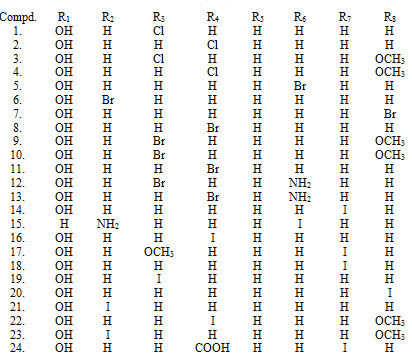 Anand Kumar Pandeya and his co-workers have synthesized a series of novel pyrido[1,2-a]imidazo-chalcones XXXV (1-3) and evaluated  their anti-tubercular activity against Mycobacterium tuberculosis. (Pandeya et al., 2016)

A series of novel heterocyclic chalcones XLVI (1-6) were synthesized by condensing 2-acetyl-5-chlorothiophene with benzaldehyde derivatives in methanol at room temperature using a catalytic amount of sodium hydroxide and reported as antioxidant agent. (Chidan et al., 2013)

Jian-Zhang Wu and his co-workers have synthesized a series of chalcone derivatives XLVIII having antioxidant activity. (Jian-Zhang et al., 2014)

Jih-Jung Chen and his co-workers have isolated a new chalcone, glycyglabrone from the roots of Glycyrrhiza glabra, together with three known compounds, licoagrochalcone, licochalcone and kanzonol. The isolated chalcones XLIX, L, LI were evaluated for their antioxidant activity. (Chen et al., 2017) 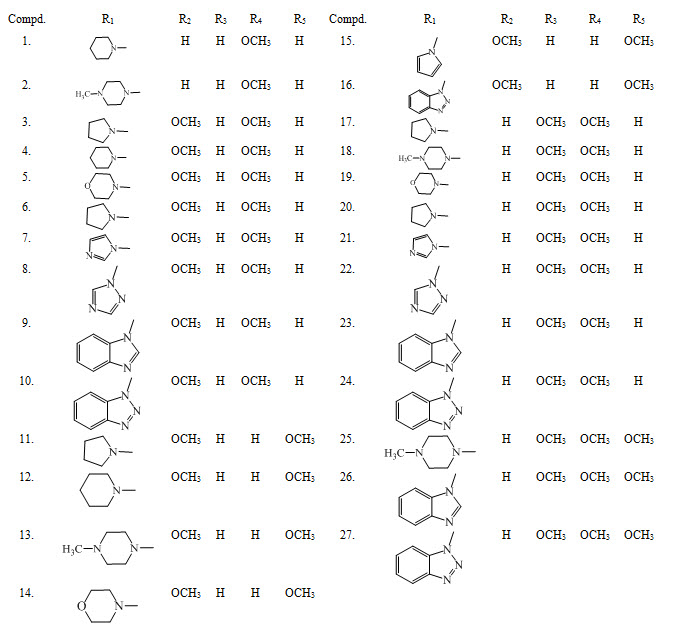 Chalcones LVII (1-17) were synthesized by Claisen-Schmidt reactions. These compounds have been reported to exhibit antimalarial activity. (Suwito et al., 2014)

Chalcone as Anticonvulsant agent
Some substituted 3,5-diphenyl-2-pyrazoline-1-carboxamide derivatives LVIII (1-20) were synthesized by reacting substituted 1,3-diphenylprop-2-en-1-one (chalcone) with semicarbazide hydrochloride. These compounds have been reported as anticonvulsant agent. (Siddiqui et al., 2010) 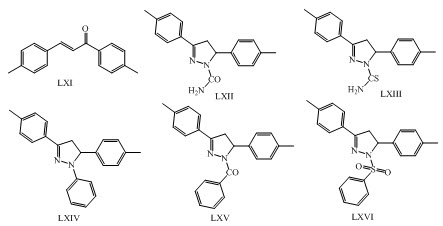 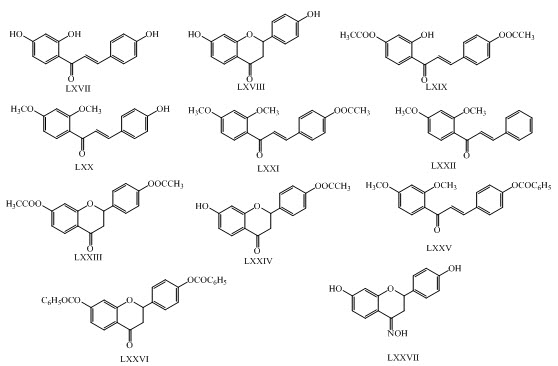 Pyrimidine based chalcones LXXXIV (1-7) were synthesized and evaluated for their antihypertensive activity. (Bukhari et al., 2013) 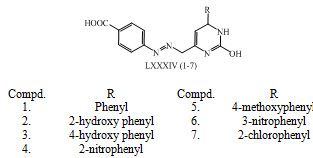 CONCLUSION
In this review we have discussed about different biological activity of chalcones and their synthetic methods. It is clear from above discussion that chalcones is a precursor of different heterocyclic moiety of valuable medicinal compounds.