A REVIEW APPROACH OF ALZHEIMER DISEASE AND PHARMACOLOGICAL MANAGEMENT

ABSTRACT
Dementia is a chronic progressive disorder mainly causes the memory loss and cognitive dysfunction due to neurodegeneration. It is popularly known as Alzheimer disease. It is the fifth disorder leads to death. Those who are the people have crossed age 60 years risk chance of cause. Dementia the disorder is widely known as Alzheimer’s disease, senile dementia, vascular Dementia, Dementia with levy bodies, Parkinson’s disease, Frontotemporal dementia. By neurological examination like CT, MRI, and Spinal fluid analysis can occasionally be justified to confirm the dementia syndrome. For the AD the treatment are broadly takes place as two types, one is cognitive symptoms treatment, another Non- cognitive symptoms treatment. In that case for cognitive sign treatment cholinesterase inhibitors (such as Donepezil, rivastigmine), NMDA receptor inhibitors (Memantine) are used. Anti-psychotics’, Anti-depressant category drugs are used for Non-cognitive symptoms treatment.

INTRODUCTION
Dementia is a chronic progressive clinical condition of neurodegenerative disease characterized by   the memory loss and reduction of cognitive function. Dementia is  neurologic disease of the brain leading to the irreversible loss of neurons and the loss of intellectual abilities.(1) Although neurodegeneration is the most common cause, trauma, ischemia, depression, or substance abuse are also possible causes to lead AD.(2) In  the year of 2050 1 in 5 people will cross the age 65 years the risk is chance of cause AD In the year of 2001 census shown the population of India indicate the aged peoples accounted as 77 million when compared to 1961 it is 5.63% more. In the year of 2001 it crosses the 7.5%. Both the prevalence and incidence of dementia related exponentially with age to increase level. In 2010, estimation of census indicates 35.6 million people worldwide lived with dementia; around 8 million newer dementia patients are appeared every year. In 2050, around the universe 135 millions will affect due to ageing peoples (2), (Bienias JL, et al.). 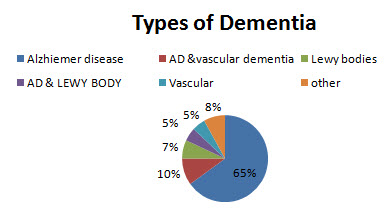 Sign of Dementia
The most common cause of dementia due to degenerative condition of the brain. It is employed gradual or progressive loss of memory and other cognitive functions usually in late life.
a) Memory loss: the dementia patient will forget all recently learned information. Normal information also gets forget, for example their names, relatives, phone numbers etc. They may be remember them later or does not remember longer.
b) Problems with language: The dementia people have trouble while speaking the right words or simple words to others. They are use unusual words, writing (hand writing) and difficult to understand.
c) Poor judgment: The AD people judge their self without believe anyone and their thinking no one has perfect and take the poor judgment.
d) Behavior changes:  The unwanted changes will appear in the patient behavior; always they are felt in sad and depressed. When they are excited they are make some sounds and tear sometime.
e) Personality changes: The people’s personality changes from initial behavior on early stages of dementia. It may occur  because of confusion, fearful ,dependent on a family member.(4)

Prevalence of Dementia
The world wide prevalence of dementia is estimated to be 30 million people, with 4.6 million People affected annually. The number of people affected by dementia is predicted to be over 100 million by 2050. (5, 6) Onset of dementia  can be as early as age 40 years, resulting in the arbitrary age classifications of early onset (ages 40 to 64 years) and late-onset (ages 65 years and older).(7,8) . The prevalence of Dementia  increases exponentially with age, affects approximately  7% of individuals ages between 65 to 74 years, 53% of those ages 75 to 84, and 40% of persons ages 85 years and older.(9,33) Genetic  causes  is also a significant risk factor, although other factors may contribute.(7)  AD is the fifth most common disease cause death. (10) AD may not cause death directly, but it predisposes patients to sepsis, trauma, pneumonia, choking and aspiration, and nutritional deficiencies mainly vitamin deficiencies. (11) 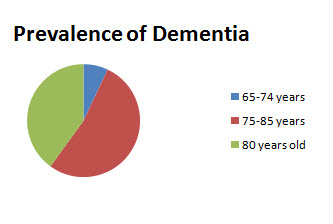 Diagnosis of Dementia
Dementia is first evaluated by a doctor who reviews the patient history and performs the physical examination.  At present the only way to definitively diagnose AD is through direct examination of brain tissue at autopsy or biopsy. For patients who has dementia syndrome recommendations of Neurological examination  include a neuroimaging study such as computed tomography (CT)  or magnetic resonance imaging (MRI), as well as laboratory tests include serologic evaluation consists blood cell counts, serum electrolytes, liver function tests, a test of thyroid function, and a vitamin B-12 level.(12)AD is not the leading clear identity on the differential diagnosis, other neurologic tests also performed, such as spinal fluid analysis or electroencephalogram (EEG) can occasionally be justified to confirm the dementia syndrome. (13) A family member those who are felt in dementia or affected by memory complaints primary attention and care should be taken as soon as possible. Up to 50% of patients who felt in dementia are not given a diagnosis in the primary care setting, leading some to believe that screening tool may be helpful in aiding diagnosis and leading to earlier treatment. (14, 15)Unless the patient developed dementia prior to age 60 years and also had a parent that developed AD before age 60years .patient family history is also helpful diagnostic tool to screen the dementia. (16, 17)

Treatment   of Dementia
The primary response of AD treatment is production of reduced cognitive difficulties and save the patient as long period. Although change the abnormal psychic and behavior in the severe condition. The current medication does not cure the disease it provides the temporary relief from AD. (18)

Cognitive symptoms treatment:
Alzheimer disease is treated with the use of cholinesterase inhibitors (Enhancement of cholinergic activity in patients with AD by inhibiting the hydrolysis of Ach through reversible inhibition of cholinesterase).Tacrine was the first drug used in treatment of AD. After the drug was usefulness due to its significant side effects like hepatotoxicity, diarrhoea, abdominal cramps, and polyuria. (19)

Donepezil: Donepezil is a predominant centrally acting ChE (cholinesterase) Inhibitor. It does not cause hepatotoxicity. It starts with the 5-mg dose and gradually increased into 10mg/ day. Donepezil is metabolized by Substrate (minor) of CYP2D6 and 3A4 under the process of glucuorinidation.

Rivastigmine: Rivastigmine is a ChE (cholinesterase) Inhibitor given in a dose 6-12mg/day for six months and has been show to improve cognitive functions in patients who have dementia, AD. Rivastigmine has central ChE inhibitory action.

Galantamine: Galantamine acts by dual mechanism such as inhibition of central ChE and as an agonist on central Ach nicotinic receptors. Galantamine is given in a dose 8-12mg/ twice a day for severe dementia and psychic patients. (20)

Antiglutamatergic Therapy
Memantine is the only NMDA receptor antagonist used currently. Memantine blocks glutamatergic neurotransmission by antagonizing NMDA receptors. Glutamate is an excitatory neurotransmitter in the brain it involves in the improvement of learning and memory.(19) Memantine drug can initiated at 5 mg/day and  gradually increased weekly by 5 mg/day to the effective dose of 10 mg twice daily.It may be given with or without food. (23

NON –COGNITIVE SYMPTOMS TREATMENT:
Most of the dementia patients are manifested by non-cognitive symptoms.they may be categorized as psychotic symptoms, disruptive behavior and depression. Effective treatment of this problem is important to deplete the stress condition and abnormal psychic problems

Anti-Depressents:
Depression is a common sign in patients with Alzheimer disease occurring in 50% of patients.the patient who receives the treatment with selective serotonin reuptake inhibitors (SSRIs) shows better therapauetic results in the drugs such as sertaline,citalopram,paroxetine and fluoxetine.(28)  serotonin/ nor-epinephrine reuptake inhibitor such as venlafaxine may be alternative.(24) The drug trazodone prescribed to manage behavioural or depressive symptoms mainly it recommends for patient affected by insomnia with dementia.(25) “Mood stabilizer” anticonvulsants such as carbamazepine or valproic acid may be appropriate alternatives to elevate the mood condition sad into excitated state, but evidence is conflicting.(26

CONCLUSION
The Alzheimer disease is irreversible disease, widely the AD treated by Anti-psychotics and Anti-Depressant drugs. This category of drugs acts well versed and shown better results in the persons behavior and prevent the frequent mood changes. The AD people also doesn’t have the sense of their daily activities, All those things are erased from their brain (it denotes Exact unconsciousness).Apart from the drug treatment, the patient should be treated with good humanity by the people who are surrounding them, the family members must be take care in patient health, then only the patient will be survive with their needful.