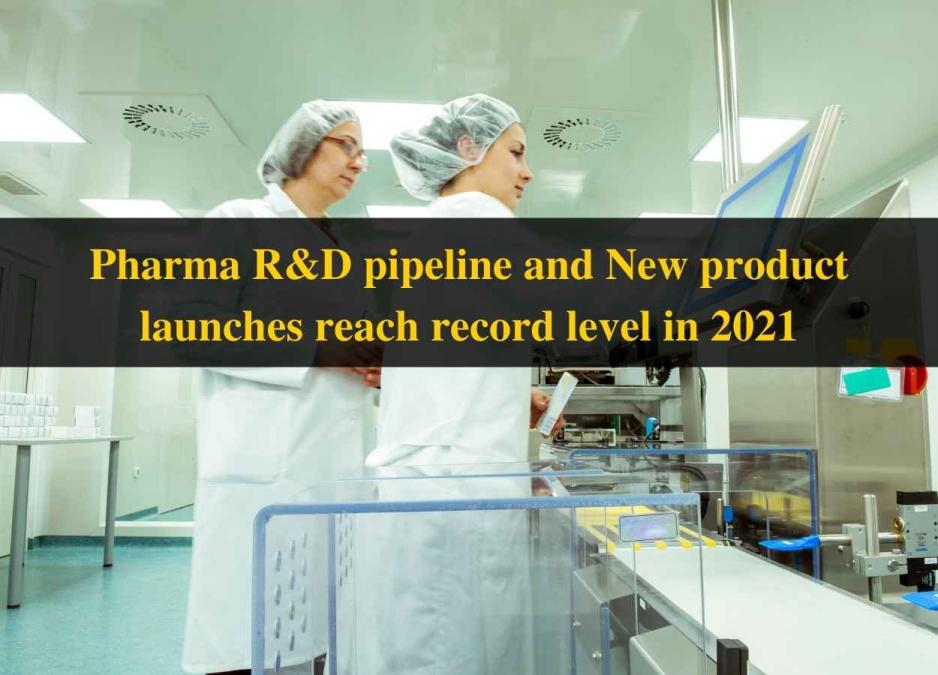 Biopharmaceutical R&D continued at a record breaking pace in 2021 despite the COVID-19 pandemic, according to a new report, Global Trends in R&D Overview Through 2021, by the IQVIA Institute for Human Data Science. The data show 5,500 new planned clinical trial starts occurred last year, a 14 percent increase over 2020.

Also in 2021, new drug approvals and launches accelerated, with 84 novel active substances launched, double the number five years ago. With a pipeline of more than 6,000 products in active development, up 68% compared to 2016, the speed of pharma R&D is on pace to be sustained for years to come.

“Almost all indicators are up, demonstrating astonishing achievements of the global life sciences industry. This activity reflects the strength of the global biomedical innovation system to discover, develop, and secure regulatory approvals for new therapeutics,” said Murray Aitken, IQVIA senior vice president and executive director of the IQVIA Institute for Human Data Science. “Concerns that the pandemic would slow down innovation have not been confirmed. On the contrary, the pandemic has accelerated biopharmaceutical innovation. Stakeholder efforts to accelerate innovation and bring scientific breakthroughs to patients faster and safer is an enduring feature of the post-pandemic, R&D landscape.”

A few key highlights of the report include
New Drug Approvals and Launches: A record 84 novel active substances (NASs) were launched globally in 2021, double the number of five years ago. Among the 72 NASs launched in the U.S. in 2021, a record 44 (over 60%) were deemed by the FDA as “first-in-class” — drugs that use a new and unique mechanism of action for treating a medical condition — and more than half (40) carried an orphan drug designation for patients with rare diseases. A range of clinical trial designs was used to support regulatory submissions in 2021, reflecting the diversity of therapeutic innovation approaches to clinical development. This included increased use of real-world evidence as part of FDA approval decisions. Achieving appropriate race and ethnicity representation in the clinical trials used as the basis for U.S. FDA approval remains a challenge, though some progress is seen among recently approved NASs.

R&D Pipeline : The total number of products in active development globally exceeds 6,000, up 68% over the 2016 level. This shows how the life sciences sector continues to invest in and advance innovative therapeutics and vaccines across a wide range of disease areas despite the COVID-19 pandemic disruption. Pipeline expansion has been most significant in oncology, gastrointestinal disorders, and neurology. While infectious diseases and vaccines had declining numbers of pipeline products until recently, they saw significant growth, largely driven by COVID-19-related treatments and vaccines. Almost all of the oncology pipeline is some type of targeted therapy. More than 40% of the pipeline is for rare cancers for which next-generation biotherapeutics — including cell and gene therapies — are increasingly being deployed.

Clinical Trial Activity: Clinical trial activity has been sustained through the pandemic, as the industry has adapted and developed new approaches to enable research to continue. Last year saw 5,500 new clinical trial starts, a 14% increase over the number started in 2020 and 19% more than started in 2019. While the number of intended clinical trial starts dipped significantly in early 2020, the recovery began in June 2020 and has increased to record levels since then. This excludes the surge of clinical trials related to COVID-19 vaccines and treatments, which has resulted in over 1,200 industry-sponsored interventional trial starts since the beginning of 2020.

Clinical Development Productivity: One measure of clinical development productivity is to relate molecule success rates to the complexity and duration of clinical trials. Efforts to improve productivity are largely focused on these areas. By these measures, clinical development productivity fell to its lowest point in 2021. The decline was driven by a lower success rate that was offset by reduced trial complexity. Across disease areas, 2021’s composite success rate fell below the 10-year trend except for vaccines and cardiovascular, although the probability of success varied considerably across diseases. The low success rate reflects efforts by drug developers to take on tougher clinical challenges in the hopes of achieving clinical breakthroughs, even though these remain rare. These lower success rates have been offset by higher volumes of investigational drugs in recent years. These factors have resulted in a higher number of new drug approvals and launches.

R&D Funding: Venture capital deal activity and investment flows accelerated in the past two years as interest in life sciences intensified. Specifically, in 2021, there were more than 2,000 deals and over USD 45 billion of deal value. The 15 largest pharmaceutical companies invested a record USD 133 billion of R&D expenditure in 2021, representing an increase of 45% since 2016 and a level of investment close to 20% of their recorded sales. Over the past five years, deal activity has shifted geographically to include more companies headquartered in China, Korea and other APAC countries, and fewer Europe-based companies. North American companies represent the largest number and total increase of deal activity over the five-year period.

Emerging Biopharmaceutical (EBP) Companies Contribution to Innovation: Emerging biopharma companies — those with an estimated R&D expenditure of less than USD 200 million and annual revenue of less than USD 500 million — are responsible for a record 65% of the molecules in the R&D pipeline. That’s a significant increase compared to less than 50% in 2016 and 33% in 2001. EBPs headquartered in China now account for 17% of the EBP innovation pipeline, up from 6% just five years ago. While 20% come from Europe-based companies and 46% from U.S.-based companies, both have lost share over the same period.

Accelerators of Innovation Cycles: Novel trial designs have been embraced as a means to accelerate innovation and are now incorporated into 8% of new trial starts. That equated to roughly 400 trials in 2021, with oncology trials responsible for almost 60% of this activity. The median time from first patent filing to launch for U.S. NASs fell to its lowest level in 2020 and 2021. This includes 21 drugs that were launched less than five years into their patent terms, compared to 16 over the prior nine years. Reducing the “white space” — the difference between the time a molecule takes to progress through clinical development and its clinical trial duration — is a major area of focus. In the case of COVID-19 vaccines, pivotal trial white space and execution timelines were reduced by 70% — an estimated 26-month time savings over benchmark. The main time-intensive elements of clinical trials include partner selection, trial startup, patient enrollment, database lock, and analysis. Key factors that enable faster trial cycles are regulatory allowances, patient interest, leadership focus, and government funding that de-risk critical decision-making, process innovation, and resource utilization agencies.