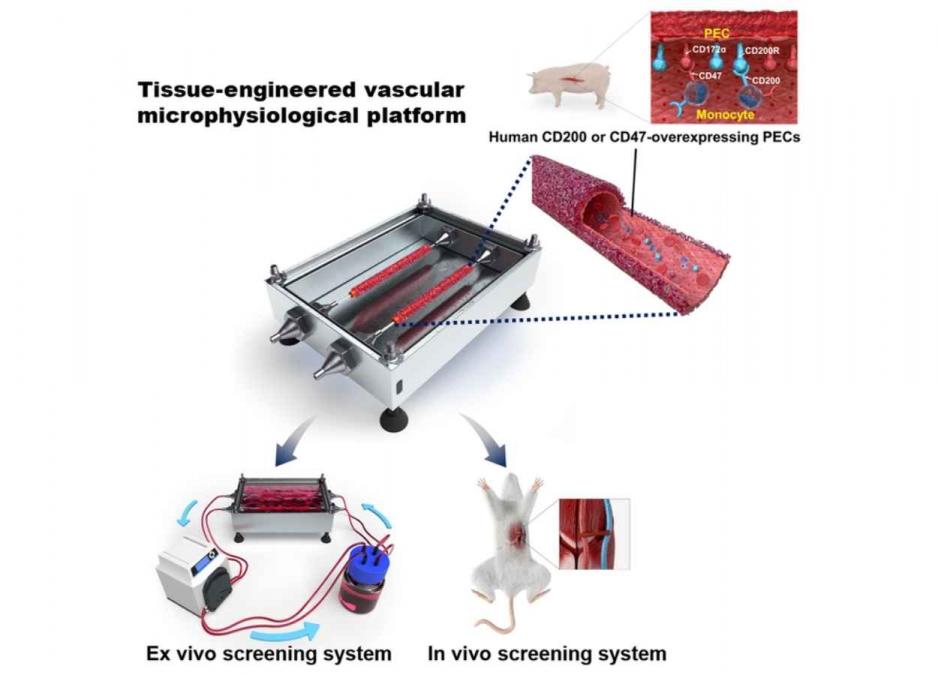 Nevertheless, an immune rejection reaction that destroys the transplanted tissue may occur in the human body following xenotransplantation. Efforts are being made to overcome this problem by developing pigs specifically for the purposes of xenotransplantation through genetic manipulation of the various factors that cause immune rejection. However, such development has been delayed due to limitations in the methods used to verify whether the developed pig organs are suitable for the human body.

The Korea Institute of Science and Technology (KIST) announced that the research team led by Youngmee Jung at the Biomaterials Research Center, collaboratively with the research team led by Jae-seok Yang, a professor at the Organ Transplantation Center at Seoul National University, has developed a bio-artificial blood vessel. This blood vessel mimics the function and properties of human blood vessels in order to verify the success of xenotransplantation, along with a circulatory vascular platform that reproduces the human blood circulation system.

Typically, the immune rejection reaction that occurs following transplantation of an artificial organ or medical device involves blood clots and vascular blockage caused by blood coagulating when the blood vessels of the organ and the recipient are connected. This is when the success of transplantation is determined. Currently, there is no way of knowing whether transplantation is going to be successful beforehand when transplanting an organ to human or animal recipients. In particular, there is no way to examine blood coagulation other than in an environment similar to the blood vessel through which blood actually flows.

In order to examine the presence of blood coagulation prior to transplantation, Jung developed an artificial blood vessel using a simple process of pouring liquid hydrogel into a tube-shaped mold made of collagen and 1fibrin, the main components of blood vessels, and then allowing it to solidify at 37°C, followed by compression. This enables the circulation of blood, as under actual blood flow and blood pressure conditions. While the structure of existing artificial blood vessels requires vascular endothelial cells to be cultured for 7 to 21 days, this novel artificial blood vessel enabled the production of blood vessels in less than 3 days, due to the stable attachment of vascular endothelial cells. This method, when applied as an analytical tool, greatly reduced the duration of the experiments.

The artificial blood vessel platform developed by Jung’s research team has been tested in not only in vitro experiments but also in vivo experiments, using animal models. The research team cultured genetically engineered porcine vascular endothelial cells on the endothelium of the vascular platform to develop an artificial pig blood vessel, followed by an in vitro test of circulating human blood through the blood vessel. An in vivo experiment using mouse models with transplanted pig blood vessels was also conducted to simulate the human immune response. Upon evaluation of the immune rejection reactions observed in both the in vivo and in vitro experiments, it was demonstrated that the sample blood vessel developed by the research team using the specifically engineered gene effectively suppressed acute immune rejection. This demonstrated the potential of the genetically modified pig developed in this study to be used as a donor animal with low levels of immune rejection.

According to Jung, “the artificial blood vessel platform is not only structurally similar to real blood vessels, but also simulates the physical and biological properties of blood vessels, creating a microenvironment similar to the human circulatory system,” and may “be used as a preclinical tool for screening the new drugs and immunotherapy agents in corporations and hospitals, demonstrating potential for commercial utility.”