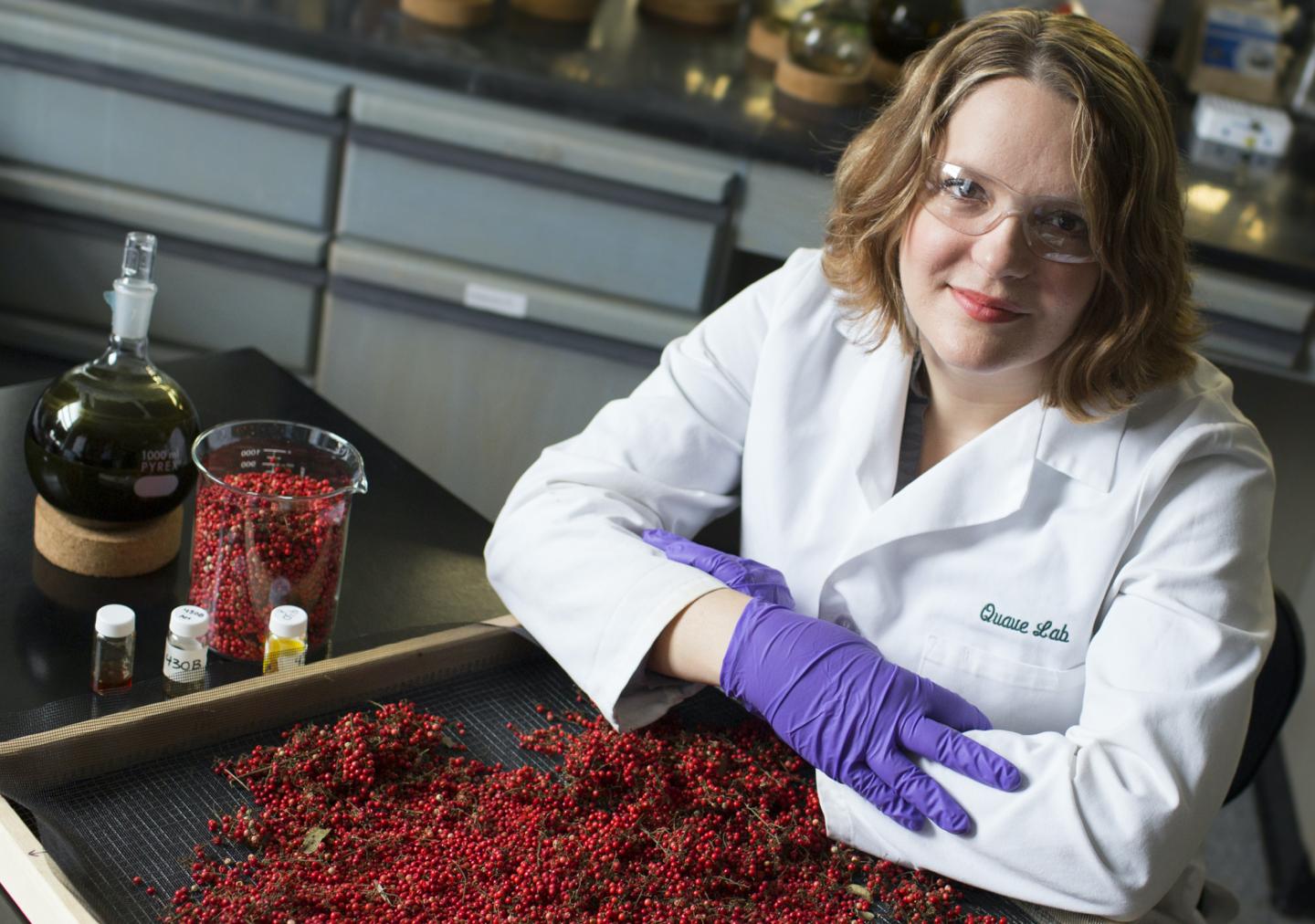 Scientists have identified specific compounds from the Brazilian peppertree -- a weedy, invasive shrub in Florida -- that reduce the virulence of antibiotic-resistant staph bacteria. Scientific Reports published the research, demonstrating that triterpenoid acids in the red berries of the plant "disarm" dangerous staph bacteria by blocking its ability to produce toxins.

The work was led by the lab of Cassandra Quave, an assistant professor in Emory University's Center for the Study of Human Health and the Emory School of Medicine's Department of Dermatology. The researchers' laboratory experiments provide the first evidence that triterpenoid acids pack a punch against methicillin-resistant Staphylococcus aureus, known as MRSA.

The Brazilian peppertree (Schinus terebinthifolia), native to South America, is also abundant in Florida, where it forms dense thickets that crowd out native species. "It is a noxious weed that many people in Florida hate, for good reason," Quave says. "But, at the same time, there is this rich lore about the Brazilian Peppertree in the Amazon, where traditional healers have used the plant for centuries to treat skin and soft tissue infections."

Quave, a leader in the field of medical ethnobotany and a member of the Emory Antibiotic Resistance Center, studies how indigenous people incorporate plants in healing practices to uncover promising candidates for new drugs.

The Centers for Disease Control and Prevention calls antibiotic resistance "one of the biggest public health challenges of our time." Each year in the U.S., at least 2.8 million people get antibiotic-resistant infections, leading to more than 35,000 deaths.

"Even in the midst of the current viral pandemic of COVID-19, we can't forget about the issue of antibiotic resistance," Quave says. She notes that many COVID-19 patients are receiving antibiotics to deal with secondary infections brought on by their weakened conditions, raising concerns about a later surge in antibiotic-resistant infections.

In 2017, the Quave lab published the finding that a refined, flavone-rich mix of 27 compounds extracted from the berries of the Brazilian peppertree inhibits formation of skin lesions in mice infected with MRSA. The extract works not by killing the MRSA bacteria, but by repressing a gene that allows the bacteria cells to communicate with one another. Blocking that communication prevents the cells from taking collective action, which essentially disarms the bacteria by preventing it from excreting the toxins it uses to damage tissues. The body's immune system then stands a better chance of healing a wound.

That approach is different from the typical treatment of blasting deadly bacteria with drugs designed to kill them, which can help fuel the problem of antibiotic resistance. Some of the stronger bacteria may survive these drug onslaughts and proliferate, passing on their genes to offspring and leading to the evolution of deadly "super bugs."

For the current paper, the researchers wanted to narrow down the scope of 27 major compounds from the berries to isolate the specific chemicals involved in disarming MRSA. They painstakingly refined the original compounds, testing each new iteration for its potency on the bacteria. They also used a series of analytical chemistry techniques, including mass spectrometry, nuclear magnetic resonance spectroscopy and X-ray crystallography to gain a clear picture of the chemicals involved in the anti-virulence mechanism.

"Nature is the best chemist, hands down," Quave says. She adds that weeds, in particular, tend to have interesting chemical arsenals that they may use to protect them from diseases so they can more easily spread in new environments.

The research team plans to do further studies to test the triterpenoid acids as treatments for MRSA infections in animal models. If those studies are promising, the next step would be to work with medicinal chemists to optimize the compounds for efficacy, delivery and safety before testing on humans.

"Plants are so incredibly complex chemically that identifying and isolating particular extracts is like picking needles out of haystacks," Quave says. "When you're able to pluck out molecules with medicinal properties from these complex natural mixtures, that's a big step forward to understanding how some traditional medicines may work, and for advancing science towards a potential drug development pathway."