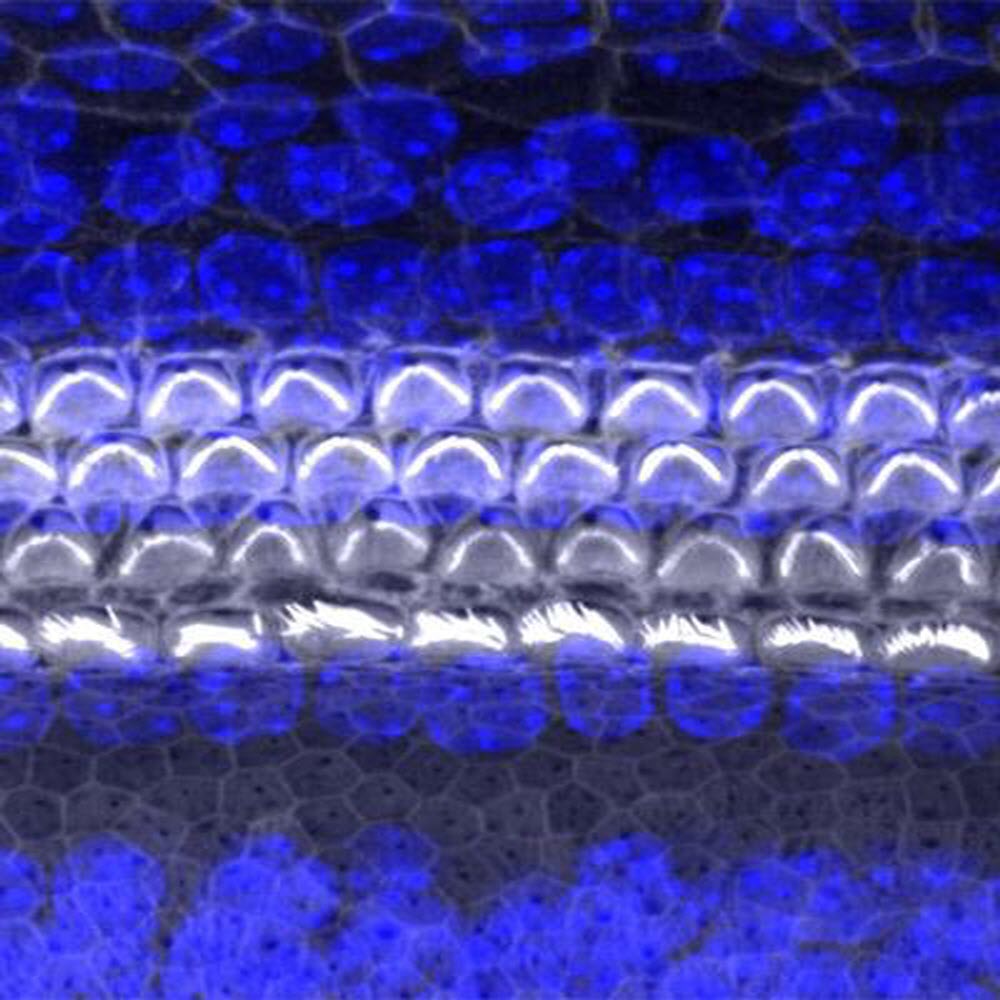 Caption : A surface view of the organ of hearing (cochlea) from a mouse, using confocal microscopy. The sensory cells are named hair cells because of their apical projections (stereocilia) which move from stimulation by sound. Credit : University of Maryland School of Medicine

Researchers at the University of Maryland School of Medicine (UMSOM) have conducted a study that has determined the role that a critical protein plays in the development of hair cells. These hair cells are vital for hearing. Some of these cells amplify sounds that come into the ear, and others transform sound waves into electrical signals that travel to the brain. Ronna Hertzano, MD, PhD, Associate Professor in the Department of Otorhinolaryngology Head and Neck Surgery at UMSOM and Maggie Matern, PhD, a postdoctoral fellow at Stanford University, demonstrated that the protein, called GFI1, may be critical for determining whether an embryonic hair cell matures into a functional adult hair cell or becomes a different cell that functions more like a nerve cell or neuron.

The study was published in the journal Development, and was conducted by physician-scientists and researchers at the UMSOM Department of Otorhinolaryngology Head and Neck Surgery and the UMSOM Institute for Genome Sciences (IGS), in collaboration with researchers at the Sackler School of Medicine at Tel Aviv University in Israel.

Hearing relies on the proper functioning of specialized cells within the inner ear called hair cells. When the hair cells do not develop properly or are damaged by environmental stresses like loud noise, it results in a loss of hearing function.

In the United States, the prevalence of hearing loss doubles with every 10-year increase in age, affecting about half of all adults in their 70s and about 80 percent of those who are over age 85. Researchers have been focusing on describing the developmental steps that lead to a functional hair cell, in order to potentially generate new hair cells when old ones are damaged.

Hair cells in the inner ear
To conduct her latest study, Dr. Hertzano and her team utilized cutting-edge methods to study gene expression in the hair cells of genetically modified newborn mice that did not produce GFI1. They demonstrated that, in the absence of this vital protein, embryonic hair cells failed to progress in their development to become fully functional adult cells. In fact, the genes expressed by these cells indicated that they were likely to develop into neuron-like cells.

"Our findings explain why GFI1 is critical to enable embryonic cells to progress into functioning adult hair cells," said Dr. Hertzano. "These data also explain the importance of GFI1 in experimental protocols to regenerate hair cells from stem cells. These regenerative methods have the potential of being used for patients who have experienced hearing loss due to age or environmental factors like exposure to loud noise."

Dr. Hertzano first became interested in GFI1 while completing her M.D., Ph.D. at Tel Aviv University. As part of her dissertation, she discovered that the hearing loss resulting from mutations in another protein called POU4F3 appeared to largely result from a loss of GFI1 in the hair cells. Since then, she has been conducting studies to discover the role of GFI1 and other proteins in hearing. Other research groups in the field are now testing these proteins to determine whether they can be used as a "cocktail" to regenerate lost hair cells and restore hearing.

"Hearing research has been going through a Renaissance period, not only from advances in genomics and methodology, but also thanks to its uniquely collaborative nature among researchers," said Dr. Herzano.

"This is an exciting new finding that underscores the importance of basic research to lay the foundation for future clinical innovations," said E. Albert Reece, MD, PhD, MBA, Executive Vice President for Medical Affairs, UM Baltimore, and the John Z. and Akiko K. Bowers Distinguished Professor and Dean, University of Maryland School of Medicine. "Identifying the complex pathways that lead to normal hearing could prove to be the key for reversing hearing loss in millions of Americans."