It's Time to See - exclusive preview of exhibition shown to commonwealth health ministers, focusing on major cause of Avoidable Blindness - Retinopathy of Prematurity - in India

(Business Wire India); Today, at the 2015 Commonwealth Health Ministers’ Meeting in Geneva, The Queen Elizabeth Diamond Jubilee Trust and partner Standard Chartered have unveiled an exclusive preview of Time to See, a landmark photography exhibition which captures the human impact of avoidable blindness in the Commonwealth, and the solutions readily available. 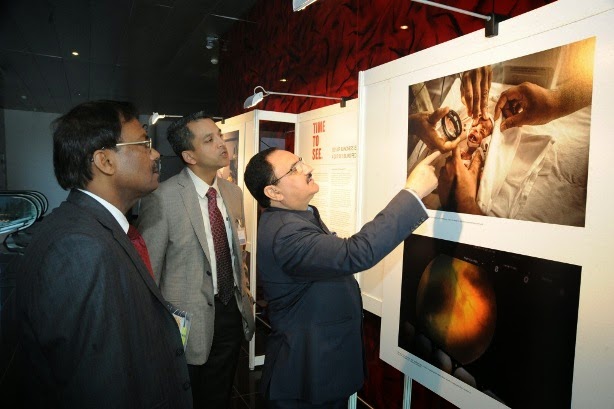 80% of blindness is avoidable - 4 out of 5 blind people shouldn’t be. Within the Commonwealth alone, there are 98 million people who are blind or have low vision. Yet there are straightforward, known solutions that can make an incalculable difference to the lives of the millions of individuals and their families who are unnecessarily affected.

Without treatment, more than 5000 infants in India are set to become blind or visually impaired each year. In emerging economies including India retinopathy of prematurity (ROP) is on course to become the most common cause of avoidable blindness in children. The condition leaves its victims completely and irreversibly blind, and results from deficiencies in the care delivered to some premature infants – predominantly through damaging the eye by over-administering oxygen in incubators.

Blindness from ROP is escalating in middle-income countries and cities in Asia, where more premature babies are surviving because of improved access to neonatal care, but where measures to prevent and treat ROP are not in place.

Time to See captures the impact that completely avoidable causes of blindness are having on people across the Commonwealth, and work that The Queen Elizabeth Diamond Jubilee Trust (the Trust), Standard Chartered along with partners are developing and supporting to fight these conditions. From late 2015, images taken by multi-award winning photojournalists Marcus Bleasdale, Ashley Gilbertson and Poulomi Basu will embark on a global tour to bring avoidable blindness - and the solutions readily available to end it - to the world’s attention.

In this exclusive preview of Time to See, Commonwealth Ministers of Health were shown images taken by Poulomi Basu of work that the Trust and the Public Health Foundation of India (PHFI), are delivering in partnership with the Government of India to prevent premature infants from going blind as a result of retinopathy of prematurity (ROP).

The collection of photographs illuminates the serious, individual, societal and health systems impact as well as positive and inspiring steps taken by partners. Photographers visited LVP Eye Institute, Fernandez Hospital and Pushpagiri Vitreo Retinal Institute in Hyderabad as part of this effort.

The overall goal of the Trust’s ROP programme in India is to reduce severe retinopathy of prematurity (ROP), and visual loss from ROP by improving the quality of neonatal care and by establishing models of sustainable and scalable services for the detection and treatment of severe ROP which are integrated into the government of India’s health system at every level. The Trust has committed to the cause of avoidable blindness 3.5 million GBP (Rs 34 crores INR) for a 4 year programme with PHFI as the lead partner, with the programme implemented by Indian Institute of Public Health-Hyderabad led by Professor G.V.S Murthy (Director) and key Indian partners. The strategies to be implemented were finalized at the National ROP Summit in Delhi in October 2013 and ratified at the first national task force meeting in Delhi in February 2014. The task force has been constituted by Government of India and Dr Rakesh Kumar, IAS, Joint Secretary, Ministry of Health & Family Welfare is the Chair of the task force, which is constituted by officers from the government and NGO sectors. The Task Force aims to promote the adoption of neo-natal care guidelines within India, raise awareness about ROP, develop an educational package for staff caring for preterm births, extend coverage of programmes for detecting and treating ROP and monitor progress. In India, medical colleges and district hospitals with established Sick Newborn Care Units will be supported in 4-5 states for improving the quality of care in a phased manner.

Astrid Bonfield CBE, Chief Executive of the Trust, who presented Time To See to Ministers at the Commonwealth Health Ministers’ Meeting, says: “We’re incredibly proud to be joining forces with Standard Chartered on this landmark photography exhibition. We hope that Time to See will raise awareness all over the globe to the alarming fact that 80% of blindness is avoidable, yet we have the solutions to end it. It’s thanks to the great work of our partners, like the Public Health Foundation of India, that we’re making hopeful steps towards ending avoidable blindness from certain causes of, and we hope that this exhibition will encourage further support. It’s a huge privilege to work with such distinguished photojournalists - Marcus Bleasdale, Ashley Gilbertson and Poulomi Basu - to further this cause. Together we can bring to the world’s attention the immeasurable difference ending avoidable blindness would make to the lives of people currently without or at risk of losing their sight.

Many of our fellow Commonwealth citizens do not yet have access to simple eye care, and are going blind when it could be avoided. The cost to them, their families, communities and countries, when they are unable to work and support their loved ones, when children are missing school to help their blind parents or grandparents, is considerable. We must ensure that eye care becomes an integral part of basic health services, and universal health coverage, to guarantee that preventable conditions affecting vision, like retinopathy of prematurity, become a thing of the past.”

Throughout 2015, the world-renowned and multi-award winning photojournalists Marcus Bleasdale, Ashley Gilbertson and Poulomi Basu will visit seven countries across the Commonwealth - Australia, Fiji, India, Kenya, Nigeria, Pakistan and Uganda - to document the devastating effect completely avoidable forms of blindness are having on people and communities.

Time To See will be formally launched at the 2015 Commonwealth Heads of Government Meeting in Malta in November before embarking on a world tour.