TURMERIC AS MEDICINAL PLANT FOR THE TREATMENT OF ACNE VULGARIS

ABSTRACT
Herbal medicines are gaining increased popularity due to their advantages, such as better patient tolerance, long history of use, fewer side-effects and being relatively less expensive. Furthermore, they have provided good evidence for the treatment of a wide variety of difficult to cure diseases. The skin is the outermost layer of the body that is often easily damaged by environmental factors as well as stress and poor eating habits. Acne vulgaris (or simply acne) is an infectious disease and one of the most prevalent human diseases. Acne is a cutaneous pleomorphic disorder of the pilosebaceous unit involving abnormalities in sebum production and is characterized by both inflammatory and noninflammatory lesions. Common therapies that are used for the treatment of acne include topical, systemic, hormonal, herbal and combination therapy. Although here is a wide market for cosmetic products that offers to improve skin problems, nature also provides a solution to these. Although the medical and surgical treatment options are the same, it is these features that should be kept in mind when designing a treatment regimen for acne. Natural treatments for skin that give lasting results are often better than expensive commercial products and cosmetic procedures. One such natural treatment is turmeric powder for skin. Turmeric is considered safe in amounts found in foods and when taken orally and topically in medicinal quantities. Turmeric’s primary biologically active component is curcumin. Research has shown that curcumin has potent antioxidant, wound-healing, and anti-inflammatory properties, which may prove to be therapeutic against acne. This review focuses on the treatment of acne using turmeric as medicinal drug.

INTRODUCTION
The skin is the outermost layer of the body that is often easily damaged by environmental factors as well as stress and poor eating habits. Although here is a wide market for cosmetic products that offers to improve skin problems, nature also provides a solution to these. Acne vulgaris (or simply acne) is an infectious disease and one of the most prevalent human diseases. It is characterized by different areas of scaly red skin (seborrhea), pinheads (papules), blackheads and whiteheads (comedones), large papules (nodules), and sometimes scarring (piples). Severe acne is usually inflammatory, however it may also be non-inflammatory. In acne, the skin changes, due to changes in pilosebaceous unit skin structures including hair follicles and their associated sebaceous glands. These changes usually require androgen stimulation (1). Acne vulgaris is usually due to an increase in body androgens, and occurs more often in adolescence during puberty. Acne is usually seen on the face, upper part of the chest, and the back of subjects who possess greater numbers of oil glands (2). Natural treatments for skin that give lasting results are often better than expensive commercial products and cosmetic procedures. One such natural treatment is turmeric powder for skin. 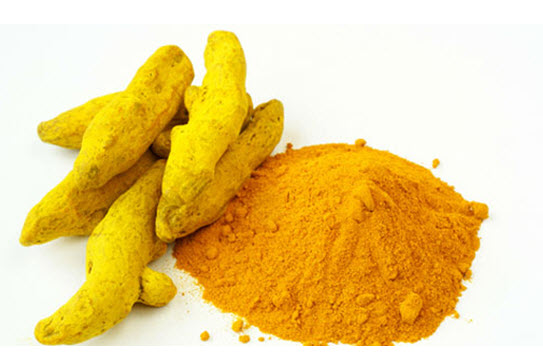 Turmeric (Curcuma longa): Turmeric’s primary biologically active component is curcumin. Research has shown that curcumin has potent antioxidant, wound-healing, and anti-inflammatory properties, which may prove to be therapeutic against acne. Turmeric is considered safe in amounts found in foods and when taken orally and topically in medicinal quantities. It may cause atopic dermatitis in some people. However, pregnant women should not take medicinal amounts of turmeric because it could stimulate the uterus.36Topically turmeric may cause the skin to temporarily stain yellow-especially in people with light skin tones. When used as a topical remedy, it is typically mixed with water or honey to a pasty consistency and applied directly to the skin. Orally, dried turmeric can be mixed into liquid and consumed.

Microscopic characteristics
The transverse section of the rhizome is characterized by the presence of mostly thin-walled rounded parenchyma cells, scattered vascular bundles, definite endodermis, a few layers of cork developed under the epidermis and scattered oleoresin cells with brownish contents. The cells of the ground tissue are also filled with many starch grains. Epidermis is thin walled, consisting of cubical cells of various dimensions. The cork cambium is developed from the subepidermal layers and even after the development of the cork, the epidermis is retained. Cork is generally composed of 4–6 layers of thin-walled brick shaped parenchymatous cells. The parenchyma of the pith and cortex contains curcumin and is filled with starch grains. Cortical vascular bundles are scattered and are of collateral type. The vascular bundles in the pith region are mostly scattered and they form discontinuous rings just under the endodermis. The vessels have mainly spiral thickening and only a few have reticulate and annular structure (1, 8, 9).

Methodology
General identity tests
Macroscopic and microscopic examinations; test for the presence of curcuminoids by colorimetric and thin-layer chromatographic methods (1).

Pesticide residues
To be established in accordance with national requirements. Normally, the maximum residue limit of aldrin and dieldrin in Rhizoma Curcumae Longae is not more than 0.05 mg/kg (19). For other pesticides, see WHO guidelines on quality control methods for medicinal plants (17) and guidelines for predicting dietary intake of pesticide residues (20).

Heavy metals
Recommended lead and cadmium levels are not more than 10 and 0.3mg/kg, respectively, in the final dosage form of the plant material (17).

Other purity tests
Chemical tests to be established in accordance with national requirements.

Major chemical constituents
Pale yellow to orange-yellow volatile oil (6%) composed of a number of monoterpenes and sesquiterpenes, including zingiberene, curcumene, α- and β- turmerone among others. The colouring principles (5%) are curcuminoids, 50–60% of which are a mixture of curcumin, monodesmethoxycurcumin and bisdesmethoxycurcumin (1, 6, 25). Representative structures of curcuminoids are presented below. 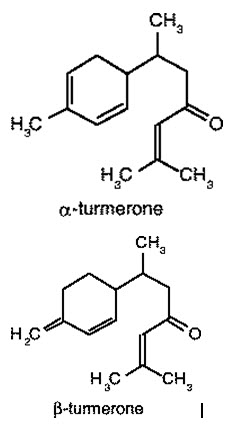 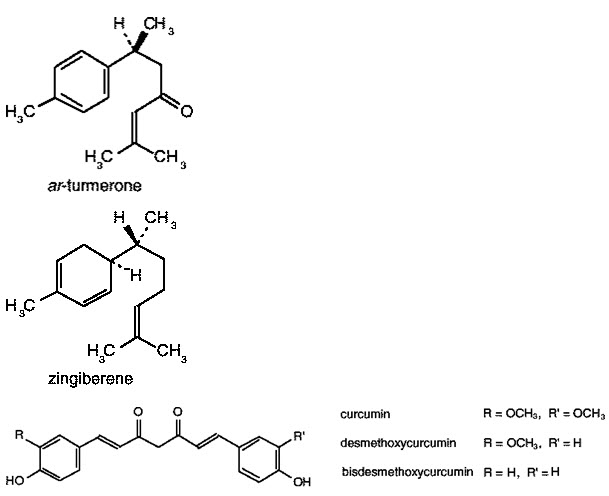 Medicinal uses
Uses supported by clinical data
The principal use of Rhizoma Curcumae Longae is for the treatment of acid, flatulent, or atonic dyspepsia (26–28).

Uses described in pharmacopoeias and in traditional systems of medicine
Treatment of peptic ulcers, and pain and inflammation due to rheumatoid arthritis (2, 11, 14, 29, 30) and of amenorrhoea, dysmenorrhoea, diarrhoea, epilepsy, pain, and skin diseases (2, 3, 16).

Activity against peptic ulcer and dyspepsia
Oral administration to rabbits of water or methanol extracts of the drug signifi- cantly decreased gastric secretion (44) and increased the mucin contents of gastric juice (45). Intragastric administration of an ethanol extract of the drug to rats effectively inhibited gastric secretion and protected the gastroduodenal mucosa against injuries caused by pyloric ligation, hypothermic-restraint stress, indometacin, reserpine, and mercaptamine administration, and cytodestructive agents such as 80% methanol, 0.6mol/l hydrochloric acid, 0.2mol/l sodium hydroxide and 25% sodium chloride (30, 46). The drug stimulated the production of gastric wall mucus, and it restored non-protein sulfides in rats (46, 47). Curcumin, one of the anti-inflammatory constituents of the drug, has been shown to prevent and ameliorate experimentally induced gastric lesions in animal models by stimulation of mucin production (48). However, there are conflicting reports regarding the protective action of curcumin against histamine-induced gastric ulceration in guinea-pigs (41). Moreover, both intraperitoneal and oral administration of curcumin (100 mg/kg) have been reported to induce gastric ulceration in rats (41, 49–51).
Non-specific inhibition of smooth muscle contractions in isolated guinea-pig ileum by sodium curcuminate has been reported (41).
The effect of curcumin on intestinal gas formation has been demonstrated in vitro and in vivo. Addition of curcumin to Clostridium perfringens of intestinal origin in vitro and to a chickpea flour diet fed to rats led to a gradual reduction in gas formation (41).
Both the essential oil and sodium curcuminate increase bile secretion after intravenous administration to dogs (41). In addition, gall-bladder muscles were stimulated (39).

Clinical pharmacology
Oral administration of the drug to 116 patients with acid dyspepsia, flatulent dyspepsia, or atonic dyspepsia in a randomized, double-blind study resulted in a statistically significant response in the patients receiving the drug (27). The patients received 500 mg of the powdered drug four times daily for 7 days (27). Two other clinical trials which measured the effect of the drug on peptic ulcers showed that oral administration of the drug promoted ulcer healing and decreased the abdominal pain involved (28, 29).
Two clinical studies have shown that curcumin is an effective antiinflammatory drug (52, 53). A short-term (2 weeks) double-blind, crossover study of 18 patients with rheumatoid arthritis showed that patients receiving either curcumin (1200 mg/day) or phenylbutazone (30 mg/day) had significant improvement in morning stiffness, walking time and joint swelling (52). In the second study, the effectiveness of curcumin and phenylbutazone on postoperative inflammation was investigated in a double-blind study (53). Both drugs produced a better anti-inflammatory response than a placebo (53), but the degree of inflammation in the patients varied greatly and was not evenly distributed among the three groups.

Contraindications
Obstruction of the biliary tract. In cases of gallstones, use only after consultation with a physician (26). Hypersensitivity to the drug.

Pregnancy: non-teratogenic effects
The safety of Rhizoma Curcumae Longae during pregnancy has not been established. As a precautionary measure the drug should not be used during pregnancy except on medical advice (59).

Nursing mothers
Excretion of the drug into breast milk and its effects on the newborn have not been established. Until such data are available, the drug should not be used during lactation except on medical advice.

Paediatric use
The safety and effectiveness of the drug in children has not been established.

Results:
Consumption of alternative and complementary medicine, including medicinal plants, is increasing and is common amongst patients affected by acne and infectious skin diseases. Medicinal plants have a long history of use and have been shown to possess low side effects. These plants are a reliable source for preparation of new drugs.

Conclusions:
Many plants seem to have inhibitory effects on the growth of bacteria, fungi and viruses in vitro. Also, some plants have been shown to have anti-inflammatory and anti-fat properties. However, there are a few evidences about the effectiveness and safety of these plants in the treatment of acne and other skin infections. For this reason, chemical drugs seem to still be the first choice in the treatment of acne and skin infections. However, the efficacy and safety of synthetic drugs are under question in the treatment of acne and other skin infections. Plant reviewed in this paper have shown promising results. Hence, they might possibly be used alone or as adjuvant with other therapeutic measures or in mild to moderate situations. Possible contact sensitization especially in topical or oral use should be considered. Further clinical studies validated with controls are required to use plant particularly the species of turmeric to treat acne. Efficacy and clinical safety trials are also essential in bacterial skin infections. Mechanism of action of these plants is another important subject, which should be addressed. Phenolic compounds derived from plants have been shown to possess antibacterial activity. Most of the presented plant species in this review article possess these compounds. However, in most cases it is not known how much these compounds are responsible for their anti-acne activity. It should be noted that a lot of other plants have phenolic compounds (61, 62, 63-73). Hence, if these compounds are solely responsible for the observed anti-acne activities, all plants with phenolic compounds should have anti-acne properties, which worth examining.