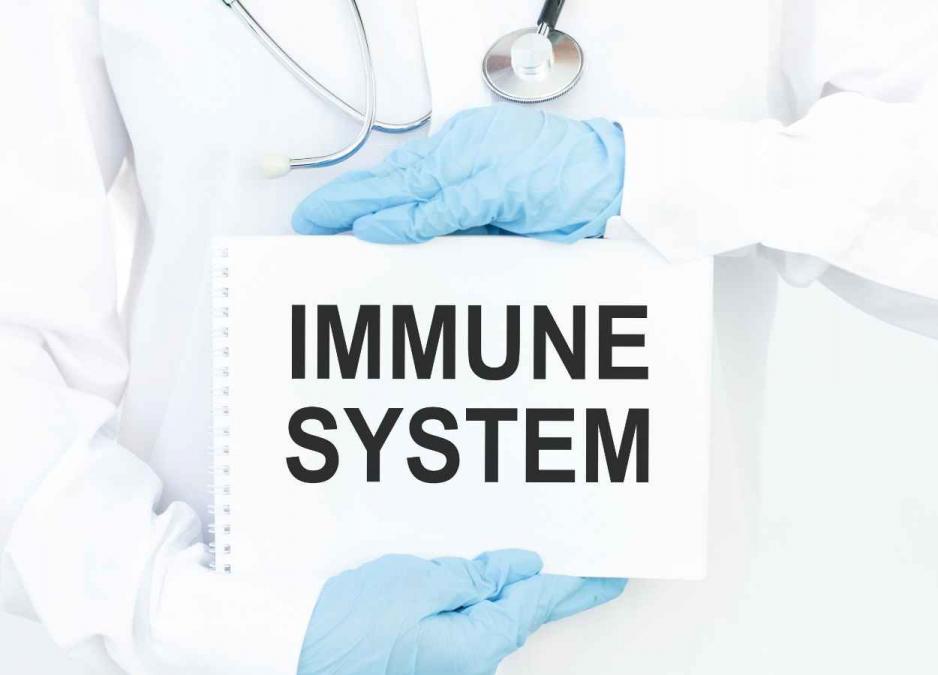 ABSTRACT
The immune system acts to protect the host from infectious agents like bacteria, virus, fungi etc. The immunity or body defence mechanism is divided into two types- natural & specific. This study was planned to investigate the immunomodulatory effect of Kuka Immunity Booster Tablets. Kuka Immunity Booster have many herbs like Tulsi, Makoy, Giloy, Mulethi, Vasa, Ashwagandha, Brahmi etc. which are used for immunomodulatory effects. Various research has been done in the past as well as are going on presently for immunity enhancing. Exigency of the present study is to incorporate the immunity modulatory herbs in a combination to see the results on healthy individuals with the help of immunity markers.
The research was carried out for 30 days with a dose of 1 tab twice a day in 10-18 yrs. old age group & 2 tab twice in 19 to 60 yrs. old age group. Criteria for evaluation are changes in the level of Th1 & Th2 cytokines. This study was an open labeled single armed study of 50 healthy subjects. Assessment of changes in rest blood investigations like IgG, IgM, IgA, CBC, IgE, ESR etc. at baseline to the end of the therapy. Also, assessment of the changes in the subjective parameters like Anorexia, Bala, physical health & immunity status at baseline & end of therapy. All the 50 subjects were given Kuka Immunity Booster Tablets.
Primary End-Point Assessment: The changes in levels of Th1 & Th2 cytokines (interferon γ & interleukin 4) were assessed at pre-treatment (Day 0) & at the end of treatment (Day 30). The subjects were enrolled & informed consent was taken. The subjects were instructed regarding the study procedure & were advised to take Kuka immunity Booster Tablets for 30 days.

All the subjects were informed regarding the investigation that will be carried out during the period of the study. The primary data obtained shows an improvement of minimum of 33.94% to 51.17% from the baseline values of the primary outcome of Th1 & Th2 cytokines. Secondary End-points Assessment: There was improvement seen in Anorexia, Bala & physical health post completion of trial.

INTRODUCTION
Immunity is defined as the capacity of the body to resist pathogenic agents. The immune system acts to protect the host from infectious agents like bacteria, virus, fungi etc. The immunity or body’s defence mechanism is divided into two types- natural (innate) and specific (adaptive).  Innate immunity is present before exposure to pathogens and is concerned with preventing the entry of the infectious agents into the body. It includes physical barriers, soluble factors, and phagocytic cells. Acquired immunity on the other hand is the resistance developed in the body against any specific foreign bodies like bacteria, viruses, toxins, vaccines, or transplanted tissues. The immune system responds to challenge with an increase in the activity of certain components that act in coordinated fashion to eliminate the source of the challenge. The various cells comprising immune system are-
i. Lymphocytes
ii. Monocytes and macrophages
iii. Mast cells and basophils
iv. Neutrophils
v. Eosinophils
Antibody- is a ‘Y’ shaped protein that is produced by B lymphocytes in response to the presence of an antigen. It is a γ globulin in nature and is also called as immunoglobulin (Ig). The five classes of circulating antibodies are immunoglobulins are IgG (forms 75%), IgA, IgM, IgE and IgD.
Lymphocytes- is the master of human immune system and are functionally divided into two subtypes. The lymphocytes that undergo maturation and differentiation in the bone marrow (B cells) and thymus (T cells). It acquires certain genetic and immune surface characters which determine their type and function; this is based on cluster of differentiation (CD) molecule on their surface .
B lymphocytes- These cells are involved in humoral immunity by inciting antibody response. On coming in contact with antigen, B cells are activated to proliferate and transform into plasmacytoid lymphocytes and then into plasma cells. Depending upon the maturation stage of B cells, specific CD molecules appear on the cell surface which can be identified by CD markers. Common B cell markers are: CD19, 20, 21, 23. These cells also possess B cell receptors for surface immunoglobin (IgM and IgG) and Fc receptors for attaching to antibody molecules . T cell help is provided to B cells by a subset of T helper cells, TH 2 by elaborated interleukins (IL-4, IL-5, IL-10, IL-13) .
T lymphocytes- These cells are implicated in inciting cell-mediated immunity and delayed type of hypersensitivity. Pan T cell markers are CD3, CD7 and CD2. Depending upon functional activity, T cells have two major subtypes: T helper (or CD4+) cells and T suppressor (or CD8+) cells.

T helper cells- Abbreviated as TH cells, these cells promote and enhance the immune reaction and are also termed as T-regulatory cells. They carry CD4 molecule on their surface and hence are also called CD4+ cells. CD4+ cells in circulation are about twice the number of CD8+ cells (CD4+/CD8 ratio 2:1) .
CD4+ cells are predominantly involved in cell-mediated reactions to viral infections, tissue transplant reactions and tumor lysis. CD8+ are particularly involved in destroying cells infected with viruses, foreign cells and tumor cells. These are directly cytotoxic to the antigen .
Natural killer (NK) cells- These are large granular lymphocytes and are part of natural or innate immunity. These cells recognize antibody coated target cells and bring about killing of the target directly. This process is termed as antibody-dependent cell-mediated cytotoxicity. These cells carry surface molecules of CD 2, CD16 and CD 56 but negative for T cell marker CD 3.

INCLUSION CRITERIA
• Apparently healthy subjects of either gender between the age group of 10 years to 60 years (both inclusive). Healthy individuals were considered as those who do not have any acute medical condition or chronic medical/surgical condition that requires either immediate or continuous medical monitoring and treatment.
• Subjects aged between 10 to 60 years of either sex not taking any medicine were included in the study.
• Subjects willing to give informed consent for the study. Consent for child was taken from his/her parents or guardian.
• Subject devoid of any medication during last one month.

EXCLUSION CRITERIA
• Individuals with immediate life-threatening diseases such as pre-existing cardiovascular, liver, or neoplastic diseases or who received any immunosuppressant, sedative, hypnotic or tranquilizer within 30 days prior to enrolment.
• Individuals with any psychiatric illness which may impair the ability to provide written ICF.
• Individuals participating in any other clinical trial.
• Pregnant or lactating females.
• Subjects suffering from different diseases/disorders and/or undergone surgery during last one year, received organ transplant, chronic smokers, underlying conditions which might affect immunity.
• Alcohol and drug abusers.

EFFICACY AND SAFETY VARIABLES
• All the subjects underwent a set of blood test before the starting of trial (Day 0) and after completion of trial (Day 30).
• Clinical parameters- Assessment were done by the evaluation of Anorexia, Bala, Physical health and Immunity Status.
• Hematological and Biochemical tests- At Day 0 and Day 30.
• CBC, CRP, ESR, LFT, RFT, Serum Iron, IgG, IgM, IgE, IgA, total proteins.
• Other immunological parameters such as Th1 and Th2 cytokines (interferon γ and interleukin 4), T-helper cells, T-cytotoxic cells and NK-cells.

ASSESSMENT OF CLINICAL AND SUBJECTIVE PARAMETERS
The clinical parameters were assessed at pre-treatment (Day 0) and post-treatment (Day 30). Out of a total of 50 subjects, only 44 subjects completed the trial. The clinical assessment is recorded for the 44 subjects. The anorexia was absent at Day 0 in 30 subjects (68.18%), which increased to absence in 39 subjects (88.63% of the total subjects) post treatment.
The general physical health was fair in 20 subjects, good in 12 subjects before treatment, which improved to fair in 16 subjects and good in 20 subjects post treatment.
The general health grade changed on a 9-grade scale in 7 subjects before treatment to 11 subjects post treatments.

But the primary data obtained shows an improvement between a minimum of 33.94% to 51.17 % from the baseline values of the primary outcome of Th1 and Th2 cytokines. 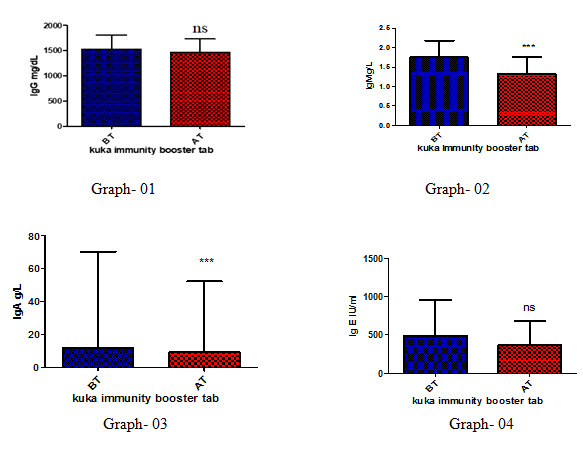 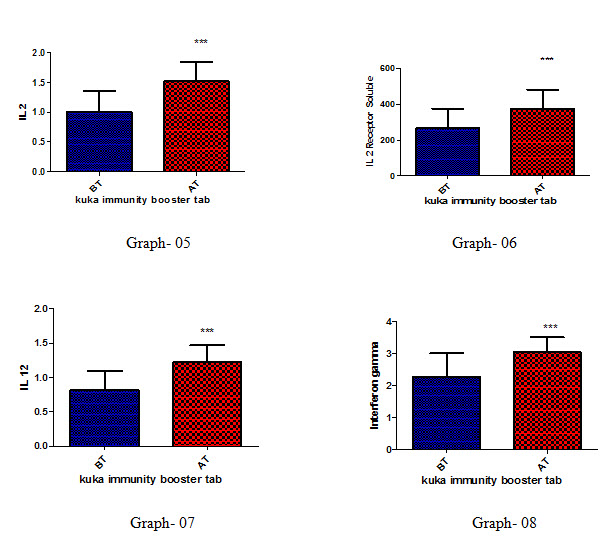 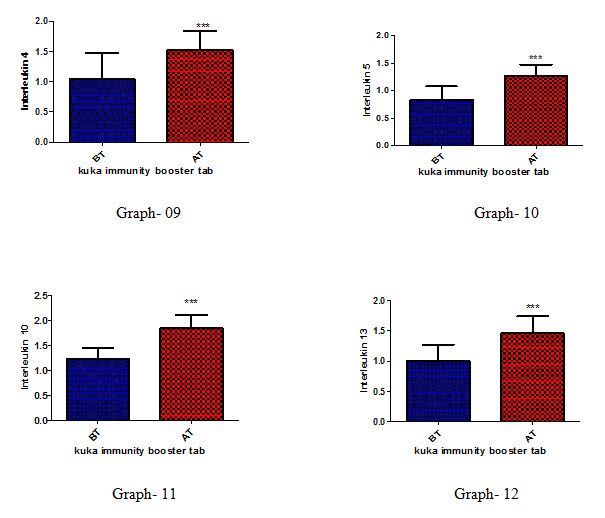 DISCUSSION
Normal function of immunity is for body defence, its failure or derangement in any way results in disease of the immune system which can be classified into four sub-groups. Immunodeficiency disorders are characterized by deficient or absent cellular & or humoral immune functions. It comprises of primary & secondary immunodeficiency disease including AIDS. Hypersensitivity reactions are characterized by hyper functions or inappropriate response of the immune system & include various mechanism of immunological tissue injury. Auto-immune disease occurs when the immune system fails to recognise ‘self’ from ‘non-self’. It includes various disease like rheumatoid arthritis, SLE etc. Possible immune disorders in which the immunological mechanism is suspected in their etiopathogenesis. Assessment was done on the basis of laboratory investigations which was done on Day 0 & at the end. Physical health status & immunity health questionnaire were assessed at Day 0 & Day 30. Lab Investigation include haematological & biochemical tests like CBC, CRP, ESR, LFT, RFT, Serum Iron, IgG, IgM, IgE, IgA, total proteins. Other immunological parameters such as Th1 & Th2 cytokines (interferon ϒ and interleukin 4), T-helper cells, T-cytotoxic cells and NK-cells. Primary data obtained shows an improvement between a minimum of 33.94% to 51.17% from the baseline values of the primary outcome of Th1 & Th2 cytokines.
Kuka immunity booster is a polyherbal Ayurvedic formulation which contains herbs that are effective in enhancing immunity-
Tulsi: Modern research has revealed that Tulsi has anti-bacterial, anti-viral and anti-fungal activity that includes activity against many pathogens responsible for human infections .
Giloy: Active compounds 11-hydroxymustakone, N-methyl–2-pyrrolidone, N-formylannonain, cordifolioside A, magnoflorine, tinocordiside and syringin has been reported to have potential immunomodulatory and cytotoxic effects .
Makoy: Till date Kakamachi has been screened for only its anti-nociceptive, anti-inflammatory, antipyretic, anticonvulsant, antioxidant and anti-hyperlipidemic, hepatoprotective, cytoprotective, antimicrobial, larvicidal, narcotic, diuretic, anti-angiogenic activities .
Mulethi: The immunomodulatory activity of an aqueous root extract of G. glabra was demonstrated in vitro to be linked to the presence of the phenolic compound glycyrrhizin reported the increased production of lymphocytes and macrophages from human granulocytes after contact with G. glabra root extract .
Vasa: Vasa, a major component of VA, is indicated in diseases such as Shwasa, Rajayakshma (tuberculosis), Raktapitta, Shotha (edema), and Jwara (fever). Vasicine and vasicinone, the bitter alkaloids available in the plant, has bronco-dilatory effect .
Triphala: Triphala research has found the formula to be potentially effective for several clinical uses such as appetite stimulation, reduction of hyperacidity, antioxidant, anti-inflammatory, immunomodulating, antibacterial and radioprotective effects, and prevention of dental caries .
Ashwagandha: Ashwagandha improves the body's defense against disease by improving the cell-mediated immunity. It also possesses potent antioxidant properties that help protect against cellular damage caused by free radicals .
Munakka: Munakka is useful for managing constipation due to its laxative property and helps to control acidity due to its cooling property. It is effective in dry cough and respiratory tract inflammation due to its cough suppressant and soothing properties .
Trikatu: Trikatu shows some important benefits like, it promotes the healthy digestion, improves all gastric functions, it increases food absorption. It reduces congestion in digestive tract. It is recommended for poor digestion and poor appetite. It is recommended for improving lung functions .
Brahmi: Its main pharmacological actions are antioxidant, anti-inflammatory, anticonvulsant, cardiotonic, bronchodilator, and peptic ulcer protection Various indications for use of Brahmi described in Ayurvedic medicine are memory improvement, epilepsy, insomnia, and anxiolytic .
The present report subjects taken Kuka immunity booster tablets have shown improvements in enhancing immune functions, physical health, and anorexia. The efficacy of Kuka immunity booster tablets can be due to the synergistic actions of the potent herbs present in the formulation. There were no adverse effects either reported or observed during the clinical study.