SPERMICIDAL CONDOM AND RISK OF URINARY TRACT INFECTION IN FEMALE

Which are the common symptoms of UTIs?
• Painful burning sensation when urinating and feeling the need to urinate recurrently
• Uneasiness, pressure, or bloating in the lower abdomen
• Pain in the pelvic area
• Cloudy ,bloody, smelly urine
• Fever
• Chills
• Nausea
• Vomiting
• Fatigue

Spermicidal agent Nonoxynol-9 and Urinary Tract Infection risk in women:
The spermicides are those agents which kills sperm is a sort of birth control. Nonoxynol-9 is spermicide and surfactant. Having Molecular formula C33H60O10 and chemical Name: 26-(4-nonylphenoxy)-3,6,9,12,15,18,21,24-octaoxahexacosan-1-ol.
Spermicides are non-hormonal contraceptives which show local action. It is use during intercourse, where they immobilize or inactivate or damage or kill sperms without eliciting systemic effects by this action it gives extra protection from pregnancy. But theses agent can show some allergic reactions which includes temporary itching, redness, and swelling. Nonoxynol-9 has been in use as an over-the-counter (OTC) drug in various forms like creams, gels, , film, sponge, pessary, aerosol foams, jelly ,condom lubricants, cervical caps and diaphragms. The contraceptive failure rates for spermicide range from 29% to 18% .There is a dose-dependent relationship between nonoxynol 9 usage and the development of bacterial vaginosis(Dose :52.5 mg to 150 mg or less). There are many confusion in mind about advantages and disadvantages.

Are there any positive features of Nonoxynol-9 as spermicide?
• Instant onset of action as a spermicide (5 -15 min minutes, cream/gel immediately effective)
• Reduction in the rate of occurrence of Chlamydia, Gonorrhea, Trichomoniasis, bacterial vaginosis infections.
• Inactivate herpes simplex viruses and human immunodeficiency virus: bactericidal and virucidal effects shown by spermicidal agent by disrupting the cell membrane and the viral envelope.( lipoproteins of the cell membrane to permanently disrupt the cell membranes)

Are there any potential side effects due to use of Nonoxynol-9 as Spermicidal agent?
• Damage of vaginal mucosal or rectal cells, which could assist transmission of HIV/STIs.
• Thinning of the epithelium of vaginal and rectal area.
• Damage to mucosal epithelial and cells of the immune system, Y-lymphocyte activation, resulting in an increased risk of transmission.
• Increases vulnerability to Human Immune Virus or Sexually Transmitted Infections when use through rectal or anal route during intercourse.
• Pelvic inflammatory disease, subsequent tubal damage due to abrasion and infertility which can be symptomised as itching, burning sensation, redness of vaginal cavity.
• Spermicidal used with mechanical barrier can produce cervical neoplasia (may be associated with human papilloma virus transmission)
• Rate of absorption in systemic circulation depends on product vehicle. 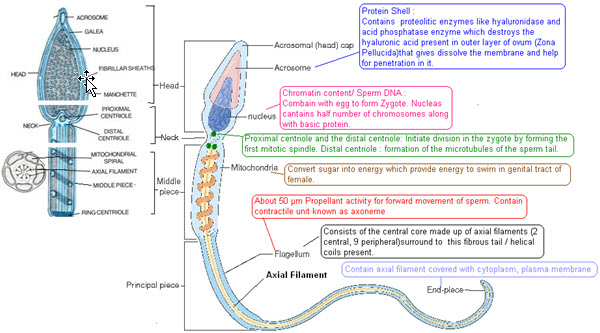 • Altering the integrity of the sperm cell membrane.
• The active chemicals in vaginal spermicide interact with the lipoproteins of the cell membrane to permanently disrupt the cell membranes of spermatozoa, resulting in severe damage to the acrosome (head), neck, midpiece, and tail of the sperm and rapid, irreversible loss of function and motility within the vagina and viability
• Altering the vaginal pH, causing a hostile environment for sperm.
• Change the character of vaginal fluids, alter the capacity of different organisms to bind to the vaginal epithelium, and suppress Lactobacillus growth without influencing Escherichia coli growth.
• nonoxynol-9 also kills good bacteria that keep the acidic pH in vaginal cavity, which helps to prevent growth of other harmful germs
• Cell permeability increases and the leaking of cellular components occur.
• Carbohydrate-metabolizing enzymes and the mitochondria are disturbed