ABSTRACT:
Controlled release local drug delivery systems offer advantages compared to systemic dosage forms for periodontitis. The objective of this research was to design and evaluate sustained release dental films containing drug in a non-biodegradable polymer for targeted delivery of the drug. The polymer ethyl cellulose was used in the formulation of dental films. The dental film was then evaluated for various parameters like thickness, folding endurance, and weight variation, and content uniformity, in vitro and in vivo study. Drug release profile of the dental film showed that the film exerted an initial burst release followed by a sustained release of the drug and the drug release was well above the minimum inhibitory concentration throughout the time of study. The release data obtained were subjected for release kinetics study. The study suggested that the non-biodegradable based dental film is a potential local drug delivery device for the treatment of periodontitis.

Advantages 3
1. Periodontal pockets are easily accessible and are therefore a convenient site for localized drug delivery system, which could be inserted into the pocket.
2. It is useful in controlling and monitoring the desired drug levels in the site.
3. It allows local modification of tissue permeability, inhibit protease activity or decrease immunogenic response.
4. It is a useful means of delivering a drug to oral cavity that is not absorbed into the gastrointestinal system.
5. It by passes hepatic first pass metabolism, thereby offering a greater bioavailability and reduction in dosage.
6. The drugs escape from the destructive acidic environment of the stomach.
7. Therapeutic serum concentration of the drug can be achieved more rapidly.
8. Sustained release drugs offer a onetime application and have an advantage over repeated application.

The oral cavity provides a diverse environment for colonization of a wide range of microorganisms. Periodontal diseases are a general term encompassing several pathological conditions such as gingivitis and periodontitis. Periodontitis is a local infection with primary bacterial etiology in the gingival crevices, which affects the structural organs surrounding the teeth like periodontal ligament, connective tissue and bone. The warm and moist pocket environment fasters the growth of gram-negative, anaerobic bacteria that proliferate in the subgingival space. The aim of dental healthcare is to control the population of microorganisms. Slowing or arresting of the oro-dental infections can be achieved by controlling bacterial plaque.5

The systemic administration of antibiotics is a useful method for controlling subgingival flora but it has been found that discontinuation of systemic antibiotic therapy results in recolonization of pathogens. Therefore long term antimicrobial therapy is required for complete eradication of microorganisms. High oral doses are required to achieve effective concentrations in the pocket but high doses given for long periods of time eventually cause development of resistant strains of bacteria, super infection, gastrointestinal and central nervous system disturbances. To overcome the disadvantages of systemic chemotherapy with antibiotics, recent technical advancements have led to the development of new drug delivery systems that provide sustained therapeutic activity by targeting the delivery of a drug to a particular site. If a particular drug is targeted to a desired site, it minimizes the distribution of drug to other body organs.6

Controlled drug delivery systems offer numerous advantages compared with conventional dosage forms, which include improved efficacy, reduced toxicity, improved patient compliance and convenience. The primary objective of this research was to design and evaluate sustained release dental bio-dental inserts containing moxifloxacin HCl for placement into the periodontal pockets of chronic periodontitis patients for targeted delivery of drug in order to reduce periodontal pathogens. The effects of various formulation variables on the drug release profiles from the bio-dental inserts were studied to determine optimum formulations.7

PERIODONTITIS
Periodontal diseases are characterized by localized infections and inflammatory conditions where anaerobic Gram-negative bacteria are mainly involved and directly affect teeth-supporting structures. Periodontal disease affects one or more of the periodontal tissues, alveolar bone, periodontal ligament, cementum and gingiva. The pathogenesis of this disease involves immunological responses leading to tissue destruction and bone loss. Periodontitis is a chronic inflammatory disease characterized by destruction of gingival connective tissue, periodontal ligaments, and alveolar bone8.Periodontitis produces irreversible destruction of periodontal tissue and tooth loss. This condition is diagnosed clinically by loss of attachment between the tooth and the supporting tissues, thus creating a pocket between the root of the tooth and the supporting tissues, and/or by radiography showing bone loss9. The main causative factor is the formation of a microbial biofilm at the gingivocervical margin, which evokes anti-inflammatory response in the gingival tissue, which progresses deeper into the periodontal tissue.10

Periodontal diseases are mainly categorized into gingivitis and periodontitis and always the former precedes the latter. But in some cases gingivitis never progresses to periodontitis. Initial lesion, early lesion, established lesion and advanced lesion are the four stages of plague induced periodontal lesion. During the initial lesion the high activity of immune response generally occurs in gingival tissues. Early lesion generally will take four to twelve days and comprises of inflammatory responses. Established lesion is marked by significant occurrence of plasma cells. Formation of periodontal pocket, ulceration and suppuration of gingiva, alveolar bone and periodontal ligament destruction, tooth mobility and tooth loss are the major features of advanced lesion.

The “red complex” that appears later in connection with the development of the biofilm consists of species that are considered to be periodontal pathogens, namely, Porphyromonas gingivalis, Treponema denticola and Tannerella forsythensis, which occur more commonly in deeper pockets13. The ecological plaque theory proposes that the increasing quantity of plaque provides an appropriate environment for colonization and growth of more pathogenic bacteria19.  Thus dynamic relationship is established whereby the inflammatory response results in environmental changes subgingivally, produce a shift in the balance of the resident microflora which changes the gingivally healthy situation to gingivitis. Bacteria then move further through the junctional epithelium and into underlying tissues, thereby predisposing to periodontal disease.14

Diagnosis of periodontitis usually relies mainly on clinical data but microbiological studies are also useful both in establishing the etiology of the disease and in controlling the treatment of the patient . Other periodontal disease markers (e.g. proteins, enzymes, immunoglobulins) are also potentially useful but have to date been rarely applied in differential diagnosis15. 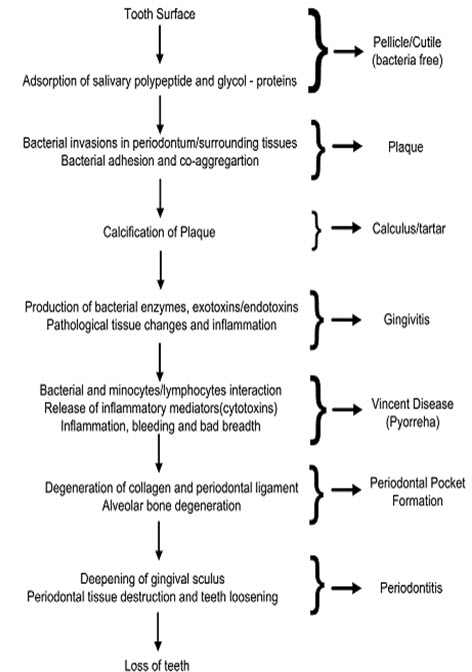 TYPES OF PERIODONTITIS19
1. Mild Periodontitis (Gingivitis)
Gingiva is red, shiny, swollen and soft, or spongy in texture.  The gums begin to separate from the teeth, forming pockets, which fill with plaque.  Toxins produced by the bacteria in plaque irritate the gums.  Patients suffering from gingivitis will have a pocket depth of 3mm.

2 .Moderate Periodontitis
Deeper pockets form as more bone and tissue are lost.  The toxins stimulate a chronic inflammatory response in which the body in essence turns on itself and the tissues and bone that support the teeth are broken down and destroyed. It is characterized by puffy, bleeding gums with a pocket depth of up to 5mm and early stages of bone loss.

3. Advanced Periodontitis
This is a major state of periodontitis.  It is characterized by swollen, bleeding gums, more bone loss, gum recession and a pocket depth up to 6mm or more which is harder to treat.  Teeth may become loose because a large amount of bone and tissue have been lost. Further destruction could lead to the loss of teeth due to poor support.

4. Refractory Periodontitis
This stage can usually result in tooth loss because the major amount of bone is lost due to the excessive destruction of the bone and tissue, which are supporting to the teeth. 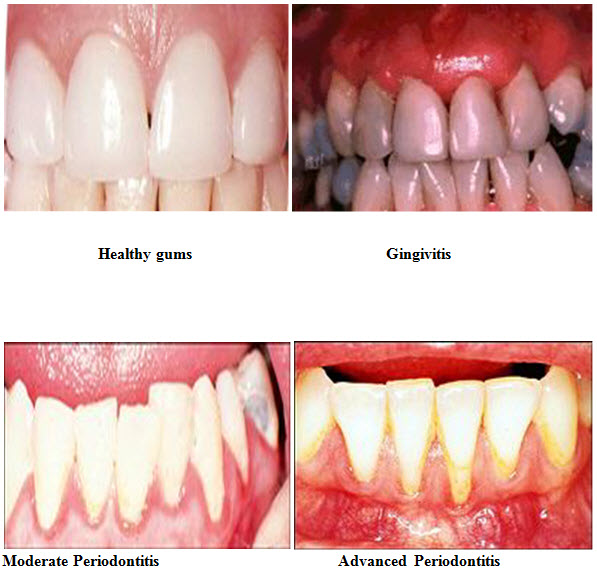 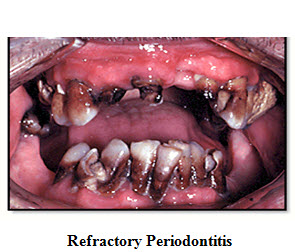 Various types of  Periodontitis are being seen in above pictures

EVALUATIONS OF FORMULATIONS21
Periodontal bio-dental inserts were evaluated for physical characteristics as follows:

• Surface pH: Periodontal bio-dental inserts were left to swell for 1 hour on the surface of the agar plate, prepared by dissolving 2%(w/v) agar in warmed double distilled water with constant stirring and poured into the petridish to solidify at room temperature. The surface pH was measured by means of pH paper placed on the surface of the swollen film. The mean of three readings was recorded21

• Swelling index (% S) :Swelling index of the drug loaded bio-dental inserts was determined by placing the film(area 7*2mm2) in the petridish containing about 10 .0 ml of phosphate buffer 7.6 ,before placing the film in the petridish its initial weight was calculated and increase in weight due to swelling was determined by weighing the bio-dental inserts at the time interval of 1,2,3,4,5,6,7,8,9,10,11, and 12 hours.

The Percentage of swelling was determined by using the following formula

• Drug content uniformity: Dental inserts (size of 7x2 mm2) were taken from different areas of the film and placed into a 10 ml volumetric flask, in to which 5.0 ml of methanol was added and kept aside till the film is completely dissolved. Withdraw 1 ml of solution and diluted to 10 ml with pH 7.6 phosphate buffer. The absorbance of the solution was measured at 290.5 nm. The polymeric solution without drug served as blank.22

• In-vitro drug release: Dental inserts were subjected to in-vitro release by using fabricated static dissolution method reported in the literature was adopted. Dental inserts of known weight and dimensions (size of 7×2 mm2) were placed separately into small vials containing 5.0 ml of pH 7.6 phosphate buffer. The vials were closed with closer and kept at 37°C for 5days. The buffer was drained off and replaced with fresh 1 ml of pH 7.6 in a time intervals of 1, 2, 3, 4, 6, 8, 10, 12, 24, 48, 72, 96, and 120 hours. After that the absorbance of samples were determined by u.v spectroscopy at  λmax 24 .

RESULT AND DISCUSSIONS
All the dental inserts were investigated for changes in the appearance, drug content and in vitro drug release. In this research work, a novel effort was made to design a dental insert loaded with the drug for the treatment of the disease periodontitis. On the basis of thorough and regular study of review of literature, solvent casting method was employed to prepare the dental insert. All the formulated dental inserts were evaluated for weight uniformity, drug content, folding endurance, thickness, percentage moisture loss, swelling index, tensile strength and in vitro drug release study.
Hence it can be concluded that dental inserts can be prepared using standard polymers and other co processing agents in order to achieve controlled drug release in a prolonged manner for treatment of periodontitis.