ABSTRACT
Interactions of proteins could be resulted from homodimerisation or heterodimerisation. But these are quite specific and always selective in nature and act onlyon particular set of class of proteins, which provide substantial target behaviour to a drug designer. Here in this paper, provided a commentary based review compiling the short notes information provided on protein proteins interactions, by “Catherine Royer”

INTRODUCTIONS
Interaction of biomolecules lead to the various biochemical events. Even drugs derived from natural source, as well as synthetics, also needs to interact with biomolecules to affect their activity[1-3].Althoughprotein-protein interactions (PPIs) are the keys, toregulate or transduce a signal to a function for maintaining a normal homeostasis, but any fault leads to a malfunctioning and diseases (say e.g. anaphylactic shock)[4, 5].Around > 99% metabolic routes utilised the PPIs for tight hold. In recent years, various genomic tools and techniques[6, 7] were used to understand the nature of PPIs and now it is much established that these interactionscan often result from aphysical contacts, involving bonding and electrostatic forces.

PPIs are critical for intracellular signalling, endocytosis and internalisations. They are crucial to the understanding of all in vivo functions, cellular regulation, biosynthetic and degradation pathways, signal transduction, Nucleic acid replication, transcription and translation, multi-molecular assembly associations, cellular packaging, optimisation of immune response. They also relate to allosteric mechanisms, either turning genes on or off and therefore attain high interest for drug designing. All biological processes are regulated through association and dissociation of protein molecules. These includesendogenous biomolecules receptor binding, protease inhibition of protein lysis, Antibody-antigen recognition efficacy, signal transduction mechanisms, enzymesubstrate affinity, vesicle transport, Post-translations or -transcriptions modifications. Hence, PPIs are now highly targeted and become centre stage of protein science. The ability to predict the preferred method by which proteins interact would facilitate assignment of protein function.

Classes of Protein-Protein Interactions
Majorly PPIs resulted intothe complexes formation, as homo-oligomers orhetero-oligomers. The homo-oligomerare macromolecular complexes constituted by only one type of protein subunit. Protein subunit assembly is guided by the establishment of non-covalent interactions in the quaternary structure of the protein. Disruption of homo-oligomers in order to return to the initial individual monomers often requires denaturation of the Complex. Several enzymes, carrierproteins, scaffold proteins, and transcriptional regulatory factors carry out their functions as homo-oligomers. Distinct protein subunit interacts in hetero-oligomers, which are essential to control several cellular functions. The importance of the communication between heterologous protein is even more evident during cell signalling events and such interactions are only possible due to structural domains within the proteins.

There is another category where they are considered their interactions in stability context.Stable interactions involve proteins that interact for a long time, taking part of permanent complexes as subunits, in order to carry out structural or functional roles. These are usually the case of homo-oligomers (e.g. cytochrome c), and some hetero-oligomeric proteins, as the subunit of ATPase. On the other hand, a protein may interact briefly and in a reversible manner with other proteins in only certain cellular contexts-cell type, cell cycle stage, externalfactors, presence of other binding proteins etc. These are called transient interactions(e.g.- Could be seen in 5HT receptor-macromolecular complexes [8]). The another way to classify these interactions as covalent and noncovalent interactions. Covalent interactions are those with the strongest association and are formed bydisulphide bonds or electron-sharing.Although being rare, these interactions are determinant in some posttranslational modifications, as ubiquitination and sumoylation. Noncovalent interactions are usually established during transient interactions by the combination of weaker bonds, such as hydrogen bonds, ionic interactions, van der Waals forces, or hydrophobic bonds.

Homo-oligomerization
The noncovalentinteractions of protein quaternary structure provide, an edge over the cases where thefunctional unit comprised of a linear polypeptide chain. Initial binding of ligand excels energy on subunit site of protein and drives it to adopt an alter transition conformation. However, the modulation of subunit affinity towards the ligand binding is independent of the adopted fold structure of the protein, providing a considerable energetic marginfor modulation of activity. Also, these experiments told the protein regulatory functions works up to an appropriate molar concentration range and later the affinity of protein subunit fades out, indicating the role of protein concentration dependent. These regulatory functions can either activate or inactivate the progression of any cellular process induced by oligomer or the monomer. Hence it is worth to say that the function in oligomers can fine-tuned by available ligand concentration (could any ions,ortho- or allosteric substrate and ligandsetc.) and by protein concentration (comparative level of expression ordegradation rates), see figure as an example of homooligomerisation. 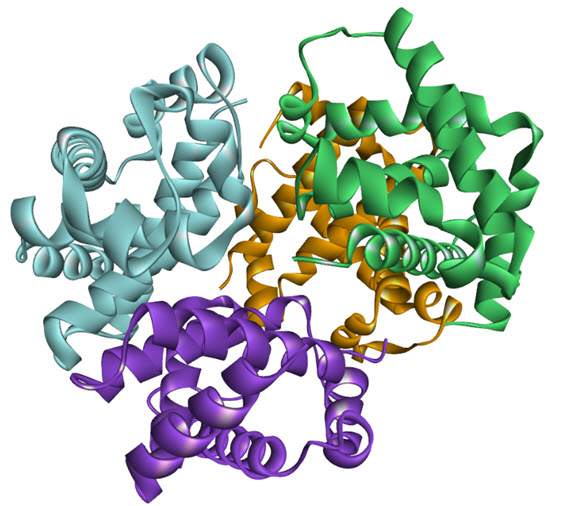 Protein domains involved in Signal Transduction
Src homology domains 2 and 3,are commonly referred to as SH2 and SH3 domains. The SH2domains recognize tyrosine phosphorylated proteins (particular autophosphorylatedgrowth factor receptors)[10]. A ribbon cartoon shown below, indicating the SH2 domain of the lymphocytespecific tyrosine kinase, P56lck along a co-crystallise peptide [11], see figure 2. The structuralarchitecture of SH2 domains possessof a three-stranded twisted beta sheet which is sandwichedbetween two alpha-helices. The SH2 domain also have a deep cleft which acquired high affinity for phosphotyrosine, but not for, either phosphoserine or phosphothreonine. 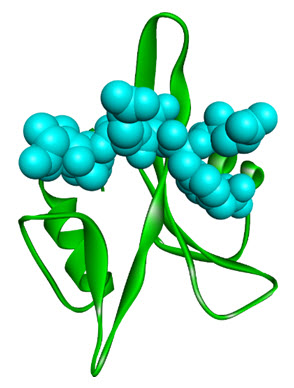 Like SH2 domains, SH3 domains are also found in similar signal transducer proteins (protein tyrosine kinases), however they recognize polyproline type II helical structures (PXXP motifs) in their binding proteins(e.g., SH3 domain of Grb2recognizes the PXXP motif of a guanyl nucleotide releasing factor;SH3 domain of the src kinase, Fyn, canbind the PXXP motif of the HIV-1 protein Nef;SH3 domain of fyn proto-oncogene complexed with asynthetic p85 subunit peptide of Phosphoinositide 3-kinase) [13] is shown in Figure 3. It could be easily seen that the SH3 domainarchitecture possesses of a beta barrel formed by two orthogonal beta sheets, which is constructed of threeanti-parallel beta strands and the proline rich site on the partner proteins pack onto aromatic residues of the SH3 domains.