ABSTRACT
The subsistence of a human H/h genetic polymorphism was first recognized by the innovation of an individual devoid of the H antigen on red cells in Bombay who had antibodies in plasma reacting with all the red cells exhibiting the normal red cell ABO phenotypes. These persons were genetically termed as homozygous hh or Bombay phenotype. H-deficient Bombay phenotype is exceptional, since it occurs in about 1 in 10,000 individuals in India and 1 per 1,000,000 individuals in Europe. After the first report of Oh phenotype from Mumbai in 1952 by Bhende, numerous other workers detected this weird phenotype in India. The complexity with the Bombay phenotype is that the individuals having blood group of Bombay phenotype (Oh) can either receive autologous donation or blood from an individual of Bombay phenotype only; no other blood will match in case of an emergency blood transfusion. The aim of present study was to communicate the information about rare blood entity and to review the previous case reports.

Receiving blood which contains an antigen which has never been in the individual's own blood causes an immune reaction due to the immune system of a hypothetical receiver producing immunoglobulin’s not only against antigen A and B, but also against H antigen. The most frequent immunoglobulins synthesized are IgM and IgG. In order to evade any complications during a blood transfusion, to notice Bombay phenotype individuals, because the normal tests for ABO blood group system would illustrate them as group O. Since Anti-H immunoglobulin’s can trigger the complement cascade, it will lead to the lysis of red blood cells while they are tranquil in the circulation, aggravating an acute haemolytic transfusion reaction. This cannot be vetoed unless the lab technologist that is concerned is attentive of the subsistence of the Bombay blood group and has the way to test for it. This exceptional phenotype is commonly present in about 0.0004% of the human population, although in some places such as Mumbai can have occurrences in as much as 0.01% of inhabitants. [5-8]

Review findings
Endogamy, inbreeding and consanguinity are the foremost factors for reasonably high occurrence of recessive rare alleles like Bombay phenotype. Bhatia and Sathe found an incidence of 1 in 7600 after viewing a large number of samples in Mumbai. Concerning the distribution and spread of the Bombay phenotype in diverse states of India, it is obvious that the phenotype is more widespread in the states of Western and Southern parts of India as compared to other states. A faintly higher occurrence of the Bombay phenotype was also found in the neighbouring state of Karnataka, Andhra Pradesh, Goa, Gujarat and Uttar Pradesh. Majority of the reported cases were either referred cases or were hospital cases in quest of blood transfusions. It is appealing to reminder that the incidence of the Bombay phenotype is high in those states of India where consanguineous marriages are more prevalent. 24 cases of Oh phenotypes in 11 distinct Indian families settled in Natal, South Africa. A huge series of H-deficient individuals (~1:1000) were originated in Reunion Island in the Indian Ocean and indicates that the Bombay phenotype is predominantly restricted to South-East Asian countries. [9-11]

Biochemistry
Biosynthesis of the H, A and B antigens involves a sequence of enzymes (glycosyl transferases) that relocate monosaccharides. The ensuing antigens are oligosaccharide chains, which are fond of to lipids and proteins that are anchored in the red blood cell membrane. The function of the H antigen in the synthesis of ABO blood group antigens is not known, although it may be concerned in cell adhesion. Providentially, people who are short of the H antigen do not suffer from harmful effects, and being H deficient is only a concern if they require a blood transfusion, because they would need blood devoid of H. [12-14]

The specificity of the H antigen is resolute by the series of oligosaccharides. The minimum prerequisite for H antigenicity is the terminal disaccharide Fucose-Galactose, where the fucose has an alpha (1-2) linkage. This antigen is fashioned by an explicit fucosyl transferase that catalyzes the concluding step in the synthesis of the molecule. Depending upon a person's ABO blood type, the H antigen is transformed into either the A antigen, B antigen, or both. If a person has group O blood, the H antigen vestiges unchanged. Consequently, the H antigen is presented additional in blood type O and fewer in blood type AB.

Two regions of the genome encode two enzymes with very similar substrate specificities: the H locus (FUT1) which encodes the Fucosyl transferase and the Se locus (FUT2) that instead indirectly encodes a soluble form of the H antigen, which is found in bodily secretions. 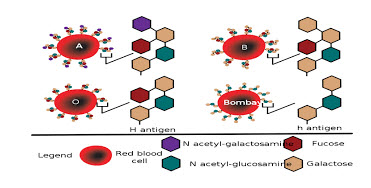 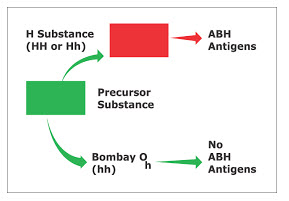 Genetics
It occurs in individuals who have inherited two recessive alleles of the H gene (genotype is hh). These individuals do not fabricate the H carbohydrate that is the pioneer to the A and B antigens, significance that individuals may acquire alleles for either or both of the A and B alleles devoid of being able to express them. Because both parents must carry this recessive allele to convey this blood type to their children, the circumstance mostly occurs in small communities where there is a superior likelihood of both parents of a child either being of Bombay type, or being heterozygous for the h allele and so carrying the Bombay distinctive as recessive. If appropriate blood grouping or testing practices are not followed, it can direct to people with Bombay Blood Group not being detected.  This group would be considered as the O group because it wouldn’t illustrate any reaction to anti-A and anti-B antibodies just like am ordinary the O group. When a cross matching with O group is done, then it would show cross-reactivity or incompatibility. Consequently reverse grouping or serum grouping has to be performed to notice this group. [15]

CONCLUSION
While the Bombay Blood Group is the rarest blood group, it is enviable to build up cryopreservation facilities for rare donor units. Every blood bank can easily uphold a rare blood type donor file from amongst their regular voluntary donors. If the blood banks can borrow or exchange rare blood units in times of need, a lot of efforts related to rare blood groups like the Bombay Blood Group can be solved. This is only promising if each blood bank has a large numeral of devoted regular voluntary donors.