ABSTRACT
The maintenance of a healthy liver is vital to overall health of the human beings. Since the liver is involved in almost all biochemical processes and there are many different diseases that will affect it. The liver is often abused by environmental toxins, which are eating habits, alcohol and overdose of certain drugs which can damage and weaken the liver and eventually lead to many diseases. Medicinal herbs are significant source of hepatoprotective drugs. Mono and poly-herbal preparations have been used in various liver disorders. According to one estimate, more than 700 mono and poly-herbal preparations in the form of decoction, tincture, tablets and capsules from more than 100 plants are in clinical use. From the literature review near about 178 medicinal plants are reported to possess a hepatoprotective activity. A drug having beneficial effect on the liver is known as hepatoprotective drug. On the other hand, drugs having toxic effect on the liver are better known as hepatotoxic drugs. The most commonly used parameters to assess the hepatoprotective activity are morphological e.g. Liver weight and volume, biochemical estimations, such as measurement of transaminase activity, SGPT, SCOT, alkaline phosphatase, serum bilirubin, total serum proteins, albumin, globulin and prothrombin time, functional parameters, pentobarbitone and hexobarbitone sleeping time and finally histopathological study regarding presence of necrosis, fatty degeneration and cirrhosis. In this review, we will briefly discuss hepatotoxicity and hepatoprotective agents.

INTRODUCTION
Liver is the largest and most complex internal organ of living systems. It serves an important role in maintenance of internal environment through its multiple and diverse functions. It is involved in the intermediary metabolism of proteins, fats and carbohydrates. It acts as a storage depot for proteins, glycogen, various vitamins and metals. It also has a role in regulation of blood volume by transferring blood from portal to systemic circulation and its reticuloendothelial system participates in immune mechanism. It plays central role in detoxification and excretion of many endogenous and exogenous compounds. Liver diseases are fatal and leading cause of illness and deaths worldwide (Wang et al., 2014a). As per research, liver disorders cause about 18000 to 20000 deaths every year globally (Fatma and Uphadhyay, 2015; Akila and Prasanna, 2014). In United States, about 2-5 % of hospital admissions are due to liver injury out of which 10% results in acute liver failures (Pandit et al., 2012 ;Ostapowicz et al., 2002). The crude incidence of liver disorder is 14 per 100000 per annum globally, whereas the standard incidence is 8.1 per 100000 per annum (Bedi et al., 2016). Acute liver failure rate is up to 13% of the cases in developed nations like USA whereas it is less (5%) in tropical countries like India (MeMahon, 2005). 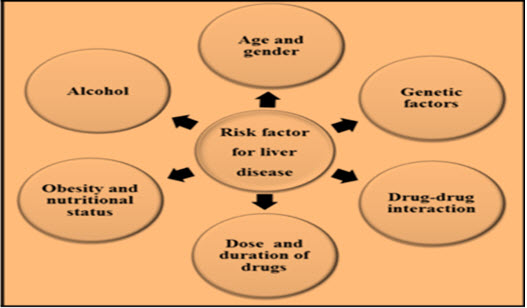 Hepatoprotective Agents
Hepatoprotective agents have been given attention due to their active roles in the additional treatment of liver disease (Flatland, 2003; Sartor and Trepanier, 2003; Twedt, 2004). In order for a compound to be used as a drug, it must be safe, harmless and effective for its intended use. The drug can be released in the market only after undergoing an extensive Food and Drugs Administration’s (FDA) drug approval process which is lengthy and costly. Apart from modern drugs, there are several hepatoprotective agents like L-carnitine (Yapar et al., 2007), Vitamin C (Adikwu and Deo, 2013), N-acetylcysteine (Maheswari et al., 2014), and Milk Thistle (Silymarin) . A review of available literature regarding medicinal plants with hepatoprotective activity revealed that different hepatotoxins were used by different workers to evaluate the activity in invitro and in vivo models. In some studies more than one hepatotoxin was used to screen the same plant. The most commonly used hepatotoxin was carbon tetrachloride (CC14 ). Near about 80% of studies CCl4 was used, irrespective of the route of administration. The total dose of CCI4 administered was in the range of 0.2-2ml / kg in acute liver damage with one day treatment and in the range of 1.5-5ml / kg in divided doses over a period of one week for chronic (reversible), 12-20ml / kg for 5-12 week (irreversible).The most commonly used parameters to assess the hepatoprotective activity were morphological e.g. Liver weight and volume, biochemical estimations, such as measurement of transaminase activity, SGPT, SCOT, alkaline phosphatase, serum bilirubin, total serum proteins, albumin, globulin and prothrombin time, functional parameters, pentobarbitone and hexobarbitone sleeping time and finally histopathological study regarding presence of necrosis, fatty degeneration and cirrhosis.Some of the studies were invitro methods for screening medicinal plants was used, where an increase in percentage of cells and enhancement of the rate of consumption of oxygen and reversal of the enzymatic values such as SGPT, SCOT, ALT in primary cultured hepatocytes was noted, these methods have been most commonly used by foreign investigators (especially Japanese investigators).

They have standardised invitro screening procedures employing primary cultured hepatocytes. In India this invitro method of screening medicinal plants for their hepatoprotective activity is not much more used extensively, probably due to technical difficulties and non-availability of the facilities to culture and maintain hepatocytes. Large-scale primary screening is possible with this method and further detailed study can be done afterwards.In vivo methods are rather time consuming and costly, since number of animals (rat or mice) required are more and study of various parameters, such as biochemical and histopathological studies add to its cost and with all these only one plant can screened at a time. (Vargas-Mendoza et al., 2014;Das et al., 2011).

Silymarin
Silymarin is a standardized extract from the seeds of a plant called milk thistle (Silybum marianum L.; Family: Asteraceae). In rural areas, it has been used as a natural remedy to treat liver diseases (Saller et al., 2001). Silymarin helps to protect and enhance the regeneration of liver cells in most of the liver diseases like cirrhosis, hepatitis and jaundice (Flora et al., 1998). Silymarin possess membrane stabilizing, anti-oxidative, anti-lipid peroxidative (Pascual et al., 1993), anti-fibrotic (Jia et al., 2001), and immune-modulatory properties and helps in liver regeneration (Pradhan and Girish, 2006). Studies on human beings demonstrated that about 20-40% silymarin is excreted as sulphates and glucuronide conjugates in bile (Saller et al., 2001). There are a few reports of low level of silymarin toxicity causing allergic skin rashes and gastrointestinal disturbances (Saller et al., 2001).

Herbal Formulations
Numerous medicinal plants and their formulations are used to treat liver disorders in ethno medicine practice as well as traditional system of medicine in India. There are about 600 commercial herbal formulations available in market all over the world, which are claimed to have hepatoprotective activity (Bedi et al., 2016). In India, about 40 anti-hepatotoxic, patented, polyherbal formulations representing a variety of combination of 93 medicinal plants from 44 families are available (Sharma et al., 1991). More than 700 mono and poly-herbal hepatoprotective preparations from more than 100 plants are in clinical use in the form of decoction, tincture, tablets and capsules. Recent global increase in the utilization of herbal drugs has also been reported in the literature (Girish et al., 2009).

Medicinal Plants
Eastern countries have been using herbal drugs to treat liver diseases since ancient time (Rajaratnam et al., 2014). The ancient Chinese and Egyptian written records are available which describe medicinal uses of plants (Rajaratnam et al., 2014). In ancient India (Vedic period) and China (Xia dynasty), records on use of herbal medicines track back to 2100 BC. The first written reports date back to 600 B.C. with the Charka Samhita of India and the early notes of the Eastern Zhou dynasty of China around 400 B.C (Onyije and Avwioro, 2012). Ayurveda, an indigenous system of medicine in India, has a long tradition of treating liver disorders with plant drugs. Minimizing side effects and increasing therapeutic efficacy of medicines is the basic need of today. Alternative system of medicine like Ayurveda, Unani etc. has been proved to be effective with minimum side effects. With rich diversity of plants, over 45,000 diverse plant species are found in India out of which about 15,000-20,000 plants have medicinal and therapeutic properties. Of these, only about 7,000-7,500 are being used by traditional practitioners (Bedi et al., 2016). As per WHO report, around three quarters of the world’s population uses herbs and other traditional medicines to cure various diseases, including liver disorders (Chaudhury and Refei, 2001). The medicinal plant such as Guduchi (Sharma and Pandey, 2010), Elephantopus scaber (Ho et al., 2012), Aquilegia vulgaris (Adamska et al., 2003), Strychnos potatorum (Sanmugapriya & Venkataraman, 2006), Tridax procumbens (Ravikumar et al., 2006), Picrorhiza kurroa (Mohd et al., 2012), Silybum marianum (Hermenean et al., 2015), Andrographis paniculata (Nasir et al., 2013), Azadirachta indica (Johnson et al., 2015) and Glycyrrhiza glabra (Sharma and Agrawal, 2014) has proven hepatoprotective properties and are used to treat liver disorders. Guduchi (Tinospora sp.) is one of the most versatile rejuvenating shrubs, also known as ’Giloya’ in Indian vernacular, and is reported to have many therapeutic applications (Pandey et al., 2012). Guduchi, as it is most commonly called, has been described as “one which protects the body” (Gawhare, 2013). CONCLUSION
The liver is of vital importance in intermediary metabolism, in the detoxification and in the elimination of toxic substances. Since the liver has considerable functional reserve, damage to the organ may not affect its activity. The maintenance of a healthy liver is vital to overall health of the human beings. Since the liver is involved in almost all biochemical processes and there are many different diseases that will affect it. The liver is often abused by environmental toxins, which are eating habits, alcohol and overdose of certain drugs which can damage and weaken the liver and eventually lead to many diseases. Therapies developed along the principles of Western medicine are often limited in efficacy, carry the risk of adverse effects, and are often too costly, especially for the developing world. Therefore, treating liver diseases with plant-derived compounds, which are accessible and do not require laborious pharmaceutical synthesis seems highly attractive.