“GST will be the best example of co-operative federalism. Together we will take India to new heights of progress. We continue to work with all parties and states to introduce a system that benefits all Indians and promotes a vibrant and unified national market. This reform will promote ‘Make in India,’ help exports and thus boost employment while providing enhanced revenue.” — Prime Minister of India, Mr. Narendra Modi, 3rd August 2016

GST:  A New Era of Reform
GST is expected to be a game-changing reform for the Indian economy in the medium to long term since it will flourish a common Indian market and reduce the cascading effect of the tax on the cost of goods and services. If implemented, GST will result in a complete overhaul of the Indian indirect tax system with wide-ranging implications including tax structure, tax incidence, tax computation, tax payment, compliances, and credit utilization and reporting. It is also expected that supply chain and other operational planning opportunities and efficiencies may be available, depending on a company’s facts. However, in the short-term/transitional phase, all Industry, including the pharmaceutical industry, are likely to face a number of challenges, including possibly negative financial impacts, the need to assess existing supply chain structures, the need for reconfiguration of IT systems and more. It is, therefore, critical that companies become well known with the proposed GST legislation, begin assessing the impacts that GST is likely to have on their business operations and begin to develop/implement a plan to manage this mega-change by the expected implementation date.

Where We Stands Today
Today The Government has consistently trying to implement GST and has taken a number of steps in that direction. In 2016, the Finance Ministry released the Model GST Bill, which outlined the construct of the proposed legislation and provided further insights into the proposed GST. This was an important development on the path to implementing and providing much-desired visibility into the intricacies of the proposed tax. In addition to this an effort to promote broad support for the proposal, the Government will provide 100% compensation to states for any loss of revenue resulting from GST, for a period of five years. The Government has planning to establish the IT infrastructure facility for the Goods and Services Tax Network (GSTN), a company responsible for developing the technology infrastructure required to support and enable the GST law. Infosys was awarded the government contract for developing the IT infrastructure for GSTN and the work is currently in progress. Under the Constitution of India, the power to levy indirect taxes is divided between the Central (federal) and state governments. In order to implement GST, the Constitution would need to grant authority to both Central and state governments to collect the tax on the same transaction. Finally, after over a year of inactivity and political posturing, critical milestones have been achieved within a short time period, namely:

• The GST Bill was cleared in the Upper House of Parliament on 3 August 2016 with unanimous support from all parliament members.
• On 1 September 2016 the GST was approved by 50% of the state assemblies in India.
• On 8 September 2016 the President of India provided consent for enactment of the GST Bill, which concludes the process of amendment of the Constitution.

Given below is a snapshot of major indirect tax in India. 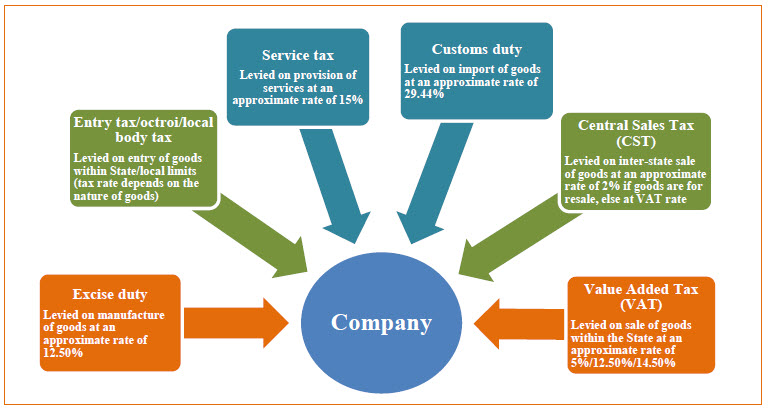 These are the key milestones in the GST law in India and cover the way for the final step in the implementation process, which will be involving the establishment of the GST Law Council within 2 months of the date of enactment. The GST Council shall have powers with reference to deciding GST rates, thresholds, exemptions etc., and will be critical to shaping and establish the final GST rules and requirements.

Salient features of the Model GST Law
As illustrated in the chart below, the current indirect taxation regime and related compliance requirements and obligations in India are very complicated and complicated. The rights to levy indirect taxes are spread among the Government (e.g., tax on manufacture and services), state governments (e.g., tax on sale and entry into notified areas) and municipal authorities (e.g., tax on entry into municipal limits). Under the GST Law, GST has been defined as a tax on the supply of goods and services. Simply put, GST constitutes a supply based levy, whereby the current triggering events for levy of tax, such as manufacture, sale, rendering/receiving of service, etc., will be eliminated. It is proposed by the committee that multiple indirect taxes would be subsumed into a dual-structure GST levy, with two components of tax Central GST and State GST being applied to the very supply of goods and services within the same state (i.e., intra-state sales). Import and inter-state movement of goods and services would be subject to Integrated GST (IGST).

Considerations for the pharmaceutical industry:
Opportunities to create supply chain efficiencies It is not uncommon for midsize to big companies to control 20–25 warehousing locations in India; one in every of the key reasons for this arrangement is the current indirect tax regime. Underneath this regime, interstate sale of goods attracts tax (Central Sales Tax) which is not creditable to the buyer, whereas interstate movement of goods across warehouses of the constant company isn’t subject to tax. Hence, pharmaceutical corporations have acquired a decentralized supply chain model whereby multiple warehouses placed in several states in India have been operated to avoid tax outpouring from the direct interstate sale of goods. Since GST on interstate sale of goods would be worthy underneath the Model GST Law, there exists a chance for companies to revisit current supply chain structures, the quantity of warehouses being operated, etc. Similarly, there could exist opportunities to optimize sourcing strategies to attain significant supply chain cost savings. For example, companies have traditionally designed their sourcing strategies with the primary goal of minimizing indirect taxes incurred under the current regime (i.e., whether to procure from within the state or from outside the state). Post-implementation of GST, these tax limitations/restrictions would stop to exist, thereby affording a lot of flexibility and enabling companies to shift their focus to non-tax sourcing considerations, which may be including purchase price, logistics cost, etc. As a result, through earlier planning, the transition to GST law may provide Pharmaceutical Corporation with a competitive advantage in terms of pricing and big margins.

Inverted duty structure
Currently, Central excise duty (tax on manufacture) is charge at 12.5% for API, whereas the formulations manufactured companies there from are subject to Central excise duty at 6% on the MRP of said goods minus a special abatement. This results in substantial accumulation of input tax credit for the manufacturer with no legal provision to obtain a refund of this credit. The GST law provides for a refund of credits accumulated beneath the current indirect tax regime ensuring from the higher tax rate on inputs vis-à-vis the lower tax rate on outputs. The provision provides for the transfer of such accumulated credits into the projected GST regime. This clearly represents a welcome proposal and potentially vital profit for the pharmaceutical industry, which so far has been unable to legitimize the amounts of blocked credits.

Outsourcing work model Corporations within the pharmaceutical industry in India usually depend upon third-party entities to manufacture finished product for and on their behalf. This arrangement is often spoken to as a “job work” model or “loan licensee” model. Beneath the current regime, tax obligations of parties under a job work model are relatively clear and straight forward: The principal supplies input material to the job worker’s premises with no tax implication and limited documentation. The job worker makes the payment of excise duty on the manufactured formulations based on the MRP of said goods as declared by the principal. Special provisions for GST-free movement of input goods/ material for job work have been provided in the Model GST law. However, the process that companies will need to follow to permit for such free movement of input goods/material might become comparatively cumbersome under the GST regime. In cases in which the permission is not granted or delayed, the supply of input materials for job work would attract GST. This requirement of obtaining permission could be time-consuming, especially during the transition phase, and may create operational and financial challenges for companies. The pharmaceutical industry would greatly benefit to the extent the Government was to convert the proposed job-work-related approvals requirement to a self-declaration model. This would result in greater efficiency and permit companies to avoid the possibility of a GST outlay (i.e., negative cash outflow). For this reason, industry should actively engage with and lobby the Government to include this transformation.