Techniques
Genotoxicity testing is to resolve if a substrate will sway genetic material or may cause cancer. They can be performed in bacterial, yeast, and mammalian cells. With the information from the tests, one can manage early development of vulnerable organisms to genotoxic substances.

Ames test
Ames Assay is used in laboratories to check for gene mutation. The technique uses many diverse bacterial strains in order to evaluate the different changes in the genetic material. The result of the test detects the mainstream of genotoxic carcinogens and genetic changes; the types of mutations detected are frame shifts and base substitutions. 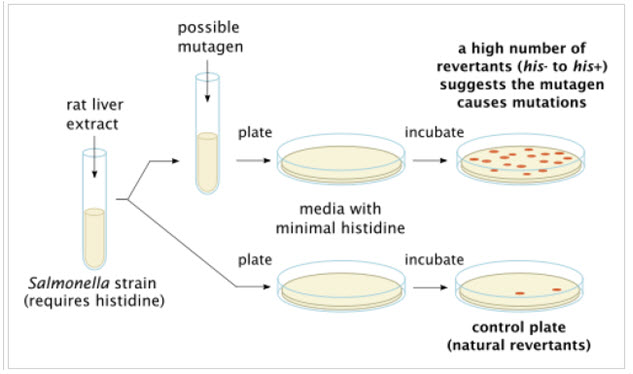 The principle of in vitro testing is to conclude whether a substrate, product, or environmental factor induces genetic damage. Cytogenetic assays using different mammalian cells. The types of aberrations detected in cells pretentious by a genotoxic substance are chromatid and chromosome gaps, chromosome breaks, chromatid deletions, fragmentation, translocation, complex rearrangements, and many more. The clastogenic or aneugenic effects from the genotoxic damage will cause an increase in frequency of structural or numerical aberrations of the genetic material. Gene mutations are commonly point mutations, altering only one base within the genetic sequence to alter the resultant transcript and amino acid sequence; These point mutations comprise base substitutions, deletions, frameshifts, and rearrangements. Chromosomes' integrity may be distorted through chromosome loss and clastogenic lesions causing numerous gene and multilocus deletions. The exact type of damage is determined by the size of the colonies, distinctive between genetic mutations (mutagens) and chromosomal aberrations (clastogens).

Umu assay
The umu assay test evaluates the capability of a substance to induce DNA damage; it is based on the alterations in the induction of the SOS response due to DNA damage. The benefits of this technique are that it is a fast and simple method and suitable for several substances. These techniques are performed on water and wastewater in the environment. 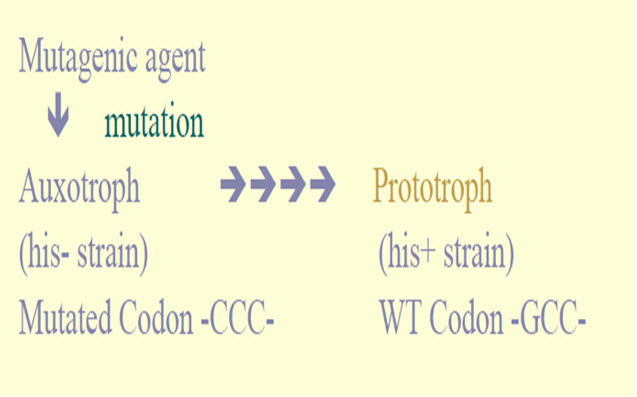 In vivo Testing
The purpose for in vivo testing is to determine the potential of DNA damage that can affect chromosomal structure or disturb the mitotic apparatus that changes chromosome number; the factors that could influence the genotoxicity are ADME and DNA repair. It can also detect genotoxic agents missed in in vitro tests. The positive resultof induced chromosomal damage is an increase in frequency of micronucelated PCEs. A micronucleus is a small structure separate from the nucleus containing nuclear DNA arisen from DNA fragments or whole chromosomes that were not incorporated in the daughter cell during mitosis. Causes for this structure are mitotic loss of acentric chromosomal fragments (clastogenicity), mechanical problems from chromosomal breakage and exchange, mitotic loss of chromosomes (aneugenicity), and apoptosis. The micronucleus test in vivo is similar to the in vitro one because it tests for structural and numerical chromosomal aberrations in mammalian cells, especially in rats' blood cells. [3]

Comet Assay
Comet assays are one of the most common tests for genotoxicity. The technique involves lysing cells using detergents and salts. The DNA released from the lysed cell is electrophoresed in an agarose gel under neutral pH conditions. Cells containing DNA with an increased number of double strand breaks will migrate more quickly to the anode. This technique is advantageous in that it detects low levels of DNA damage, requires only a very small number of cells, is cheaper than many techniques, is easy to execute, and quickly displays results. However, it does not identify the mechanism underlying the genotoxic effect or the exact chemical or chemical component causing the breaks.

Genotoxic effects such as deletions, breaks and/or rearrangements can lead to cancer if the damage does not immediately lead to cell death. Regions sensitive to breakage, called fragile sites, may result from genotoxic agents (such as pesticides). Some chemicals have the ability to induce fragile sites in regions of the chromosome where oncogenes are present, which could lead to carcinogenic effects. In keeping with this finding, occupational exposure to some mixtures of pesticides are positively correlated with increased genotoxic damage in the exposed individuals. DNA damage is not uniform in its severity across populations because Individuals vary in their ability to activate or detoxify genotoxic substances, which leads to variability in the incidence of cancer among individuals. The difference in ability to detoxify certain compounds is due to individuals’ inherited polymorphisms of genes involved in the metabolism of the chemical. Differences may also be attributed to individual variation in efficiency of DNA repair mechanisms. The metabolism of some chemicals results in the production of reactive oxygen species, which is a possible mechanism of genotoxicity. This is seen in the metabolism of arsenic, which produces hydroxyl radicals, which are known to cause genotoxic effects.

Figure-6: When normal cells are damaged beyond repair, they are eliminated by apoptosis (A).