GATEWAYS TO DRUG ABUSE: A BRIEF REPORT ON PUNJAB & HARYANA

Drug addiction is a serious problem in one country that is known for its culture, traditions & social values all over the world. The country where people commit suicide either because of love affairs or due to drug addiction related issues. Undoubtedly, this writing is talking about India.

Not just jotting some catchy sentences here while writing based on the statistics. The study shows that “drug addiction or abuse” was one of the main causes for suicides followed by “love affairs and marriage related issues” in India in 2014. 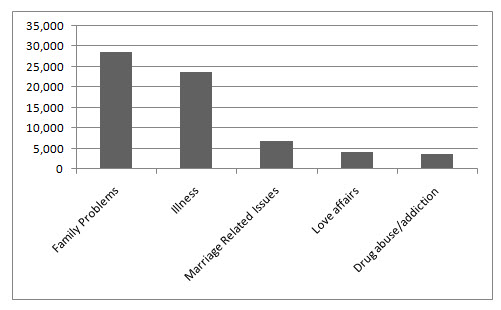 Graph shows the causes for suicide in India In 2014 (Source: NCRB)

Statistics also revealed that on an average 7 people per day committed suicide due to drug & addiction related problems in India from 2004 to 2013. Source: NCRB

We all know that zero was invented in India but the number of drug addicts in this country is going away from this Aryabhata’s invention gradually.
According to a recent United Nations report, Punjab has the highest number of drug addicts in India after Nagaland but when it comes to numbers, Haryana is also following the same trend. Because both states share its borders so one’s practice may affect the other directly or indirectly.
In India, The Narcotic Drugs and Psychotropic Substances Act(NDPS Act) came into force about more than 30 years ago even though many substances are easily available through some hidden contacts. This is the beauty of our country.

If you love drugs, there is a hope with hidden freedom in India. Pam Bondi, an American attorney said: “we realize that drug addiction is a sickness but it is also a crime.” But one another quote is that we should not force someone to remember the negative sides of drug addiction because “self-realization is great”, remarked Corey Feldman. If a drug addict gets late to recover his or her own health, the person is not only ready to spoil its own life but also families & relatives.

We cannot ignore one genetic science that if your parent is a drug addict, there are chances that the child can also be an addict.

Experts say, we need a suicide prevention programme but while thinking about the root cause of these suicides – one of the reasons is substance abuse. The excellent way to root out any problem is to cut its roots.To eliminate drug-addiction& drug abuse issues from the state, rehabilitation centres are ready to help in finding hope and give a full assistance for kicking their debilitating habit.

UN also reports that a total of 73% of the adults are addicts in Punjab with 62% of them between the ages of 19 & 24. For the state and the whole country, the warning bells started to ring for sure.
The situation is extremely critical, so a bunch of psychiatrists has already started their campaign and showed their interest. They have attached with de-addiction centres throughout Punjab as well as Haryana. They are ready to provide support like anything.

A complete history of sportspersons that have been accused allegations of using performance-enhancing drugs to boost theiractivities during competitions in all over the world.

A Russian superstar Maria Sharapova was barred for two-year from playing tennis because of positive test for a banned substance – meldonium during January’s Australian Open. Sponsors Nike, Porsche and Tag Heuer cut ties with Sharapova and she lost about 3 million in endorsements. UN also suspended her as a goodwill ambassador.

There is one movie ‘Udta Punjab’ which goes with the title of this writing and was released on June 2016 in India. This much-needed movie made Indians clear and easy to understand the real picture of Punjab where drug usage is very common. A number of programmes have been commenced by government such as rehabilitation activities but only a handful of them are able to provide assistance because of less number of registrations in rehabilitationcentres.

As highest number of drug addicts in Punjab, state government applied its forces to get those addicts rehab assisted so Punjab has the highest number of beneficiaries assisted in alcohol and drug rehab, according to a report by Ministry of Social Justice and Empowerment (Apr-Dec 2015). Haryana comes in 6th position on state-wise beneficiaries followed by Maharashtra, Karnataka, Uttar Pradesh and Manipur.