EFFECT OF PULSATILLA ON POLYCYSTIC OVARIAN SYNDROME AND ITS ASSOCIATED CANCER

ABSTRACT
Polycystic Ovarian Syndrome is one of the most common female endocrine. Many papers reported the correlation between infertility that most eminently predisposes towards cancer in PCOS women from many years. From both clinical and experimental research one can conclude that correlation between PCOS and endometrial cancer is the strongest. Most studies on correlation between PCOS and ovarian cancer as well as breast cancer failed to show a link though Pulsatilla have a strong effect on it. Various synthetic drugs which mainly used in the treatment of PCOS and endometrial cancer but here the problem is those drugs has lots of side effect/Adverse effect so we should go with the natural product Pulsatilla Sp. Which is used on PCOSand various cancer. Pulsatilla is a well establish drug for PCOS with unknown mechanism of action. Deoxypodophyllotoxin, which was isolated from the roots of P. koreana, was found to inhibit the tube-like formation of HUVECs (human umbilical venous endothelial cells) and have a potent antitumor effect. The chemical constituent saponin D present in Pulsatilla root is responsible for the anti tumor activity. The results, which are expressed as Pulsatilla saponin D has such a potent antitumor effect (IR, 82 %) on a solid tumor, which is higher than Adriamycin (IR, 64%). 23-Hydroxybetulinic acid synthesized from Pulsatilla chinensis also shows anti tumoral activity. Though the potency of pulsatilla sp. Are less than synthetic marketed drugs but by structural modification we may get potent anti canceral agent with least toxicity by Pulsatilla.

INTRODUCTION
Polycystic Ovarian Syndrome is one of the most common female endocrine (or hormonal) disorders, characterized by multiple abnormal ovarian cysts. PCOS is accompanied by such conditions as anovulation, hipertestosteronism, lower cell sensitivity to insulin, type II diabetes, hyperlipidemia and obesity. Each of the above-mentioned conditions is an approved risk factor proved to predispose towards cancer. Women diagnosed with PCOS develop higher level of testosterone, insulin, growth factors such as IGF-1 (Insulin Growth Factor-1), which were experimentally proved to have potential for direct stimulation of cancer cells proliferation. Now a day various anti-cancer drug available in the market with highly toxicity, that’s why we should keep our attention towards natural remedies. The root of various species of Pulsatilla plant (pulsatilla koreana, pulsatilla chinensis) contain saponin which shows anti-cancer properties and different species of pulsatilla also helps to reduce PCOS.

PCOS is due to a combination of genetic and environmental factors.Risk factors include obesity, not enough physical exercise, and a family history of someone with the condition. Diagnosis is based on two of the following three findings: no ovulation, high androgen levels, and ovarian cysts. Cysts may be detectable by ultrasound.

Prevalence:
PCOS is the most common endocrine disorder among women between the ages of 18 and 44. It affects approximately 5% to 10% of this age group. It is one of the leading causes of poor fertility. The earliest known description of what is now recognized as PCOS dates from 1721 in Italy. 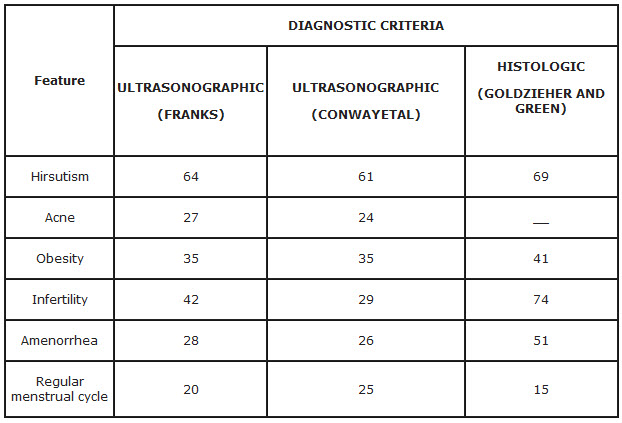 *Data were compiled from two recent studies in which ultrasonography was used as the primary method of diagnosis (Franks and Conway ) and from the classic review by Goldzieher and Green  in which the diagnosis was based on proved histologic features of ovaries after wedge resection. Note the similarity in the distribution of symptoms in the three studies.

PCOS and its link with cancer:
Many papers reported the correlation between infertility that most eminently predisposes towards cancer in PCOS women from many years. In a study of 1983 it’s reported that 3-times higher risk of endometrial cancer in patients suffering from chronic anovulation. Women who were infertility-patient displayed 7.6-fold risk of endometrial cancer. From the above mentioned statement, one can conclude that infertility increases risk of endometrium cancer, especially if accompanied by chronic anovulation. Many papers aimed at linking breast cancer to hormonal factors which is also the case in PCOS. Brinton et al.[2]  did not show correlation between infertility and breast cancer. These conclusions were confirmed in other research. . However, one research showed 1.8-fold risk in infertile patients with chronic anovulation, and yet another one showed 5.4-fold incidence of breast cancer in pre-menopause women who were previously diagnosed with anovulation. Two other papers seem very interesting with respect to PCOS patients. One of them showed that in breast cancer patients suffering from ovulation problems the risk of breast cancer was 3.5- times higher. If the same patients had signs of hyperandrogenism (persistent acne, excess of body hair), the risk was 6.8 higher.. The second paper showed that in patients with obesity, hypertension and diabetes (conditions that frequently coincide with PCOS) the risk of breast cancer is 3-times higher. In a research risk of ovarian cancer in nullipara was 2.45-times higher compared to multipara and 1.27-times higher compared to unipara. The analysis of 12 case control studies showed 2.1- fold risk in nullipara with infertility history.

Obesity, which coincides with PCOS  is a risk factor in all the above mentioned types of cancer. Meta-analysis of studies into coincidence of ovarian cancer and obesity showed that in 10 per 28 population-based studies correlation was statistically significant, and pooled effect estimate for adult obesity was 1.3 [3]. Recent epidemiologic studies have shown a positive relationship between BMI and breast cancer with a significant relative risk ranging from 1.26 to 2.52. Theoretical premises for correlation of PCOS and cancer are based on very specific observations. Unopposed stimulation of the endometrium in the setting of chronic anovulation in women with PCOS is an acknowledged factor leading to endometrial cancer development.

Endometrial cancer:
From both clinical and experimental research one can conclude that correlation between PCOS and endometrial cancer is the strongest. Endometrium of PCOS patients is known to be more sensitive to steroid hormones. Women with PCOS exhibit elevated endometrial androgen receptor expression compared to normal, fertile controls and endometrium of PCOS patients shows higher concentration of estrogen receptors. It was also proved that PCOS patients exhibit higher Cyr61 protein expression [4], protein which is integrin-binding, angiogenic factor, that also promotes cell migration and adhesion. This protein is also an apoptosis regulator and is associated with tumor genesis. Higher Cyr61 expression was also present in uterine myoma and in endometriosis. In the case of breast cancer its elevated expression was found both in tumor biopsy and in metastasis. In the course of PCOS endometrial homeostasis is disturbed. Apart from a change in Cyr61 production, a number of other modifications are identified; a change in Ki-67 expression, lower p53 production, higher cyclin D1 expression and higher bcl-2/bax ratio [5]. Disturbed homeostasis may result from intensified proliferation which may in turn lead to abnormal cell division possibly followed by tumorgenesis. However, clinical studies do not provide straightforward answer to the question about correlation between PCOS and endometrial cancer. This correlation was observed as early as 1949, 14 years after the first description of the syndrome. However, both this and some other studies on this problem [6] did not include study controls, which disqualifies explicit conclusions.

There was also an attempt to conclude that PCOS may provide better prognosis once endometrial cancer has been diagnosed [7], as histopathological research of preparations from PCOS patients showed well differentiated tumors or moderately well differentiated.

So we should pay attention how to get recovery from PCOS as well as endometrial cancer, PCOS is not responsible for ovarian cancer and breast cancer, so our aim will be the procurement of PCOS and endometrial cancer.

Synthetic Drugs used in PCOS and their major side effects (ADR) 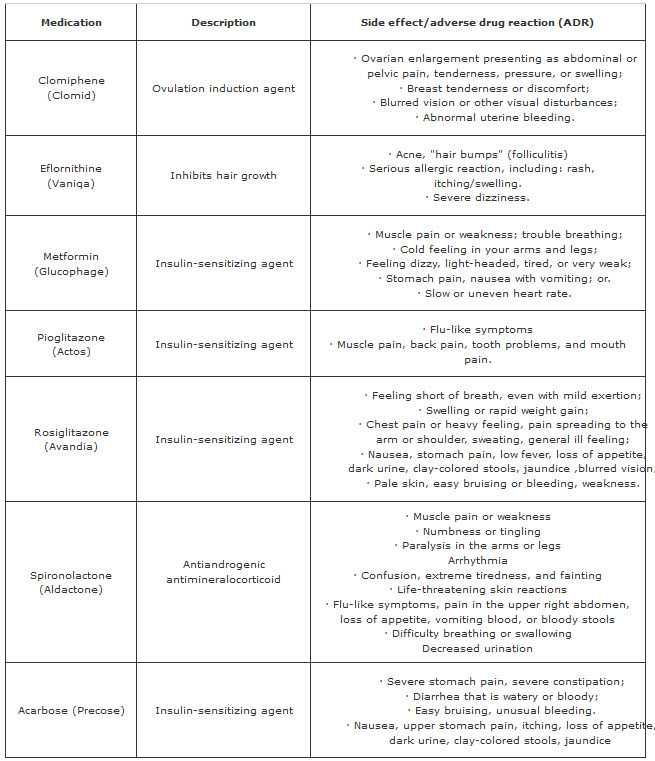