ABSTRACT:
Ebola virus is the single member of the species Zaire ebola virus, which is the type species for the genus Ebola virus, family Filoviridae, order Mononegavirales. The natural reservoir of Ebola virus is believed to be bats, particularly fruit bats, and it is primarily transmitted between humans and from animals to humans through body fluids. The Ebola virus has a high mortality rate, with a current case fatality rate estimated to be around 50%. Mortality rates for previous outbreaks have varied from 25% to 90%, and those outbreaks have been relatively short-lived (WHO, 2014) seen near the tropical rainforests of remote villages in Central and West Africa. It is spread by close contact with patients or exposure to infected biologic fluids. The virus has been found in the blood, saliva, feces, breast milk, tears, and genital secretions of infected patients. Ebola virus causes significant immune suppression and a systemic in¬flammatory response, leading to multi organ failure and shock.

INTRODUCTION
The virus is transmitted to people from wild animals and spreads in the human population through human-to-human transmission. Ebola virus is a member of the Filoviridae viral family of RNA viruses, which are characterized by the long, thin filaments seen in micrograph images. The average EVD case fatality rate is around 50%. Case fatality rates have varied from 25% to 90% in past outbreaks. It is named after the Ebola River where the virus was first discovered. It damages the endothelial cells that make up the lining of the blood vessels and creates difficulty in coagulation of the infected individual’s blood. As the vessel walls become more damaged, and the platelets cannot coagulate, the individual undergoes hypovolemic shock, or a dramatic decrease in blood pressure. (WHO and Natural Remedies).

History of Ebola Outbreaks
The first recognized filovirus outbreak was in Europe with the Marburg virus in 1967. This occurred in Germany and Yugoslavia among vaccine workers handling tissue specimens from imported African green monkeys. Thirty-one people were infected, with a 23% fatality rate. The virus was named after the German town of Marburg, where the German outbreak occurred.The first outbreak of EBOV happened almost 10 years later in 1976, with simultaneous Ebola strain outbreaks in Yambuku in northern Zaire (now the Democratic Republic of Congo, DRC), and Southern Sudan. The Zaire virus was named after the Ebola River. It caused 500 diagnosed cases with a 92% fatality rate. The simultaneous Sudan ebolavirus outbreak had a 50% fatality rate.

In 2007 a new strain of EBOV emerged in Western Uganda in the township of Bundibugyo. This outbreak lasted 2 months, with 149 suspected cases and 37 deaths. On Mar 21, 2014, a large outbreak began in Guinea, Liberia, Nigeria, and Sierra Leone. During EBOV’s known history, a few secondary cases have entered South Africa (with one health worker death), Europe, and most recently the U.S.(Sureau et al 1976 and Yogesh 2016)

SYMPTOMS: Symptoms of Ebola Virus Disease (EVD) include:
The incubation period, that is, the time interval from infection with the virus to onset of symptoms is 2 to 21 days. Humans are not infectious until they develop symptoms.(Gebretadik,2015)
• Fever, Muscle pain
• Sore throat
• Both internal and external bleeding (e.g. oozing from the gums, blood in the stools)
• Severe headache
• Weakness
• Fatigue
• Nausea,Vomiting, Diarrhea
• Abdominal (stomach) pain 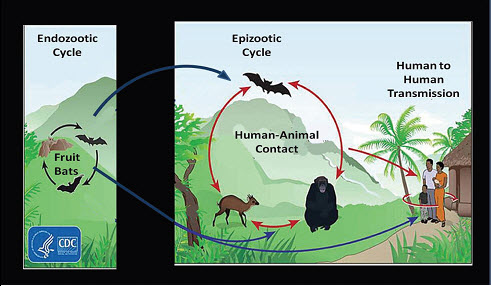 PREVENTION
There is currently no treatment for Ebola hemorrhagic fever. Infected individuals are treated for the symptoms they have, but the body must fight off the virus on its own. To help patients deal with symptoms better, supportive care is usually given. This includes:
• Administering intravenous fluids in order to keep normal levels of electrolytes.
• Using breathing devices to maintain oxygen levels and drugs to control fever.
• Maintaining blood pressure and trying to aid in blood clotting through medications.
• Preventing infections from bacteria through use of antibiotics.
• Relieving pain and keeping as clean of an environment as possible through good nursing care. (Kilgore 2015 and Home Natural Cure)

TREATMENT BY HERBAL REMEDIES
Supportive care-rehydration with oral or intravenous fluids- and treatment of specific symptoms, improves survival. There is as yet no proven treatment available for EVD. However, a range of potential treatments including blood products, immune therapies and drug therapies are currently being evaluated. And natural cures are:
• Berries: red, blue and black colored berries are all rich in powerful antioxidants and can help prevent colds and the influenza viruses from taking hold of the body. (Javier 2016 and María 2017)
• Brazil nuts are a rich source of selenium which is known to improve the immune system function. Consume two Brazil nuts daily to prevent colds and influenza.( Jun Yang,2009:)
• Chilli pepper contains capsaicin which helps to boost the immune system. It is also rich in beta-carotene which is essential for a healthy immune system as it helps defend the body against invading pathogens to prevent illness. (Aline 2012)
• Eucalyptus oil: To relieve headaches from sinus congestion and sooth a sore throat.(Arun,  2015 and Sanna,2015)
• Garlic is one of best immune-boosting foods as it has powerful antibiotic, antifungal and antiviral properties that help the body ward off and fight infections. (Rahman,2012 and Carmia, 2001)
• Ginger: Apart from being a strong antioxidant, ginger has antibiotic, antimicrobial, antiseptic, and anti-inflammatory properties. (Health benefit,2017)
• Green tea can boost the immune system as it contains a flavonoid called epigallocatechin gallate (EGCG) and antioxidants that help to fight bacteria and prevent viruses from multiplying. (Sumaya, 2018 and Sarah,2011)
• Mushrooms have high antioxidant content and are rich in the essential minerals selenium and copper that are important for the immune system.(Suphaphit,2016 and Marijana,2012)
• Phyllanthus amarus herb is very effective in naturally treating colds. (Jayram,2011)
• Turmeric has powerful anti-microbial properties and can help to prevent colds and influenza.( Selvam,1995 and Tanvir 2017)

CONCLUSION
Current epidemiological data indicate that once a primary human EBOV infection develops, classical secondary transmission occurs through direct contact with infected symptomatic individuals or their bodily fluids. Transmission in a medical setting can be especially prevalent without proper precautions.

No particular anti-viral therapy has demonstrated effectiveness in Ebola virus infection. Also, no vaccine for use in humans is yet approved by the regulatory bodies. Idea behind this article is to briefly review the history and present recent updates on Ebola virus, its pathogenesis and possible hopes for treatment.