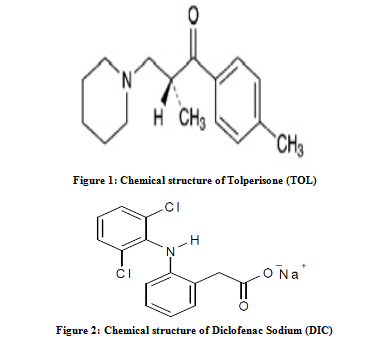 Preparation of standard stock solutions
An accurately weighed standard TOL and DIC powder (10 mg) were weighed and transferred to 100 ml separate volumetric flasks and dissolved in methanol. The flasks were shaken and volumes were made up to mark with methanol to give a solution containing 100 μg/ml of each TOL and DIC.

Preparation of synthetic mixture
Tolperisone (150 mg) and Diclofenac (50 mg) were taken and then both the drug were mixed with routinely used excipients like starch, lactose, magnesium stearate, and Talc in suitable proportion. Total 500 mg of mixture was prepared and used as synthetic mixture.

Methodology
To optimize the RP-HPLC parameters, several mobile phase compositions were tried. A satisfactory separation and good peak symmetry for TOL and DIC was obtained with a mobile phase consisting of phosphate buffer (pH 6): acetonitrile: methanol (10: 50: 40, v/v/v)at a flow rate 0.7 ml/min to get better reproducibility and repeatability. Quantification was carried out at 267 nm based on peak area. Complete resolution of the peaks with clear baseline was obtained (Figure 3). System suitability test parameters for TOL and DIC for the proposed method are reported in Table 1. Overlain UV spectrum showed that both drugs showed good absorbance at 267 nm, hence the wavelength of 267 nm was selected for quantification of TOL and DIC (Figure 4).