* The t-butoxy carbonyl (Boc) group.
An alternative choice for amino group protection is the Boc group. Its advantage is that can be removed under milder conditions than the Z group.

The Boc group is completely stable to catalytic hydrogenolysis and as such is orthogonal to the Z group. Basic and nucleophylic reagents are no effect on the Boc group and its removal can be carried out by TFA at room temperature. The most convenient reagent that can be used in the protection reaction is the Boc anhydride (Boc2O).

The 9-fluorenyl methoxy carbonyl (Fmoc) group.
The Fmoc group differs from both Z and Boc groups since it is very stable to acidic reagents.

The Fmoc group can be removed under basic conditions. Usually 20% piperidine dissolved in DMF is used as reagent. One of the reagents for introducing the Fmoc group is the FmocCl.

Protection of carboxyl groups:
Carboxyl groups are most often protected by converting them to benzyl esters or t-butyl esters.

Protection of carboxyl groups by (A) benzyl esters and (B) t-butyl esters.

The benzyl esters are cleaved by saponification, HBr/AcOH, HF and catalytic hydrogenation but not by TFA. Their response to acids is similar to that of the Z groups but somewhat less sensitive.

The t-butyl esters, unlike benzyl esters, are stable to bases or nucleophilic attack. The properties of t-butyl esters are somewhat similar to those of the Boc groups although they are less sensitive to acidolysis. They can be cleaved by TFA.

Protection of other functional groups: The alcoholic and phenolic hydroxyl groups are protected by converting them to benzyl ether or t-butyl ether. The former protecting group can be cleaved by HF, HBr/AcOH or by catalytic hydrogenolysis and the latter one by TFA. Thiol groups can also be protected by benzyl ether formation or by tritylation.

The 2, 2, 5, 7, 8-pentamethylchroman- 6-sulphonyl (Pmc) group can be cleaved by TFA under conditions similar to the removal of the Boc group. The 4-methoxy-2, 3, 6 tri-methyl benzenesulphonyl (Mtr) group is also cleaved by TFA but is less sensitive and requires a few hours for cleavage.

The amide groups (in side chains of asparagine and glutamine) can be protected by tritylation. The trityl protecting group is stable to base, catalytic hydrogenolysis, very mild acid but is cleaved with TFA. It is used in conjunction with the Fmoc amino group protection strategy.

The NH group of the imidazole ring (in the side chain of histidine) is protected in conjunction with the Fmoc strategy by tritylation. The trityl protecting group can be removed by TFA at room temperature. 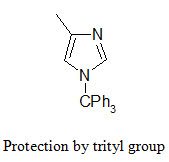 The indole ring (in tryptophane) can be protected by Boc group that can be removed by TFA. 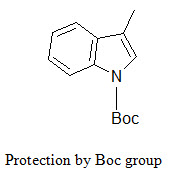 (2) SOLUTION PHASE COMBINATORIAL CHEMISTRY
The solution phase synthesis involves conducting chemical reaction simultaneously, preferably in well-ordered sets (arrays) of reaction vessels in solution. [Pandeya S.N. and Thakkar D. (2004)]16  Most ordinary synthetic chemistry takes place in solution phase. The use of solution phase techniques has been explored as an alternative to solid-phase chemistry approaches for the preparation of arrays of compounds in the drug discovery process. Solution phase work is free from some of the constraints of solid-phase approaches but has disadvantages with respect to purification.

The main disadvantage of this method is when number of reagents are taken together in a solution, it can result in several side reactions and may lead to polymerization giving a tarry mass. Therefore, to avoid this, the new approach is developed in which all chemical structure combinations are prepared separately, in parallel on a giving building block using an automated robotic apparatus.

For example: Hundreds and thousands of vials are used to perform the reactions and laboratory robots are programmed to deliver specific reagents to each vial. [Pandeya S.N. and Thakkar D. (2004)]16

(1) SPLIT AND MIX SYNTHESIS ‘OR’ PORTIONING–MIXING SYNTHESIS
This technique was pioneered by Furka and co-workers in 1988 for the synthesis of large peptide libraries. This approach is termed divide couple and recombine synthesis by other workers.  [Jung G. (1999)]8

In this technique, the starting material is split in ‘n’ portions, reacted with ‘n’ building blocks, and recombined in one flask. For the second step, this procedure is repeated. This method is particularly employed for solid phase synthesis.  [Pandeya S.N. and Thakkar D. (2004)]16

In following figure spheres represents resin beads, A, B & C represent the sets of building block and borders represents the reaction vessels. In the case, when three building blocks are used, in each coupling step after three stages (ie. divide, couple & recombine), a total number of 27 different compounds, one on each resin bead, are formed using 9 individual reactions (ignoring deprotection). 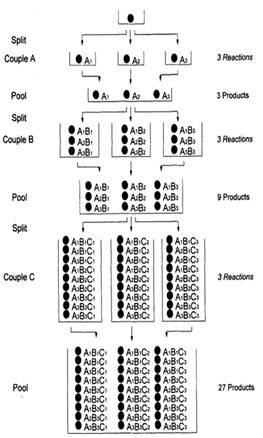 On the resulting products from split and pool synthesis, bioassays is performed and active mixture is discovered. Once an active mixture has been discovered, the next task is discovering which individual compound(s) in that mixture are active. The process of determining these active compounds is known as deconvolution.
Advantages:
a) Only few reaction vessels required
(b) Large libraries can be quickly generated (up to 105 compounds)
Disadvantages:
(a) Threefold amount of resin beads necessary
(b) The amount of synthesized product is very small.
(c) Complex mixtures are formed.
(d) Deconvolution or tagging is required.
(e) Synergistic effects may be observed during screening, leading to false positives. [Leard L. & Hendry A. (2007)]13

In following figure spheres represents resin beads, A, B & C represent the sets of building block and borders represents the reaction vessels. In the case, when three building blocks are used, in each coupling step after three stages, a total number of 27 different compounds, one on each resin bead, are formed using 9 individual reactions (ignoring deprotection). 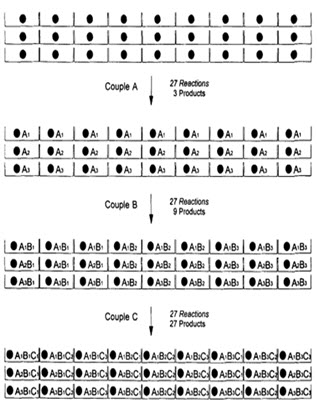