The major milestones in combinatorial chemistry can be represented in the following table:

EVOLUTION OF COMBINATORIAL CHEMISTRY
From a historical perspective, the research efforts made in classical combinatorial chemistry can be briefly outlined in three phases:

THE FIRST PHASE: In the early 1990s, the initial efforts in the combinatorial chemistry were driven by the improvements made in high-throughput screening (HTS) technologies. This led to a demand for access to a large set of compounds for biological screening.  To keep up with this growing demand, chemists were under constant pressure to produce compounds in vast numbers for screening purposes. For practical reasons, the molecules in the first phase were simple peptides (or peptide-like) and lacked the structural complexity commonly found in modern organic synthesis literature.

THE SECOND PHASE:  In the late 1990s, when chemists became aware that it is not just about numbers; but something was missing in compounds produced in a combinatorial fashion. Emphasis was thus shifted towards quality rather than quantity.

THE THIRD PHASE:
As the scientific community moved into the post-genomic chemical biology age, there was a growing demand in understanding the role of newly discovered proteins and their interactions with other bio-macromolecules (i.e. other proteins and DNA or RNA). For example, the early goals of the biomedical research community were centered on the identification of small-molecule ligands for biological targets such as G-protein-coupled receptors (GPCRs) and enzymes.  However, the current challenges are moving in the direction of understanding bio-macromolecular (i.e. protein-protein, protein-DNA/RNA) interactions and how small molecules could be utilized as useful chemical probes in systematic dissection of these interactions. By no means will this be a trivial undertaking! The development of biological assays towards understanding bio-macro molecular interactions is equally challenging as the need for having access to useful small molecule chemical probes.  [Kim S. (2005a)]9

PRINCIPLE OF COMBINATORIAL CHEMISTRY
The basic principle of combinatorial chemistry is to prepare a large number of different compounds at the same time Instead of synthesizing compounds in a conventional one at a time manner and then to identify the most promising compound for further development by high throughput screening (Process that allows rapid assessment of the activity of samples from a combinatorial library or other compound collection, often by running parallel assays in plates of 96 or more wells).  The characteristic of combinatorial synthesis is that different compounds are generated simultaneously under identical reaction conditions (ie. using the same reaction conditions and the same reaction vessels.) in a systematic manner, so that ideally the products of all possible combinations of a given set of starting materials (termed building blocks) will be obtained at once. The collection of these finally synthesized compounds is referred to as a combinatorial library. The library is then screened for useful properties and the active compounds are identified. 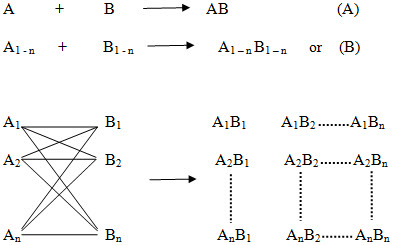 The combinatorial libraries can be structurally related by a central core structure, termed scaffold (ie. all compounds of library have a common core structure), or by a common backbone. In both case, the accessible dissimilarities of compounds within the library depend on the building blocks which are used for the construction. 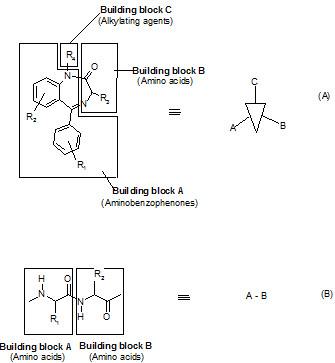 (1) SOLID PHASE COMBINATORIAL CHEMISTRY
In solid phase combinatorial chemistry, the starting compound is attached to an insoluble resin bead, reagents are added to the solution in excess, and the resulting products can be isolated by simple filtration, which traps the beads while the excess reagent is washed away.  [Leard L. & Hendry A. (2007)]1

The use of solid supports for chemical (non-peptides and peptide molecules) as well as biological synthesis (proteins, peptides, poly-nucleotides) relies/depends on three interconnected requirements:
a) A cross-linked, insoluble, polymeric material that is inert to the condition of synthesis.
b) Some means of linking the substrate to this solid phase that permits the cleavage of some or the entire product from the solid support during synthesis for analysis of the extent of reaction (s), and ultimately to give the final product of interest.
c) A chemical protection strategy (ie. Protecting group) to allow selective orthogonal protection and de-protection of reactive groups in the monomers. [Lather V. et al. (2005)]12