ABSTRACT:
Ion exchange chromatography is probably the most powerful and classic type of liquid chromatography. The popularity of ion exchange chromatography has been increased in recent years because this technique allows analysis of wide range of molecules in pharmaceutical, biotechnology, environmental, agricultural and other industries for water purification to separation of various antibiotics from fermentation broths which will enhance the yields and reduce the production time for industrial process. The main objective of this particular study is to develop some understanding for the process of ion exchange and helps to determine whether or not ion exchange will be useful for a particular application. This topic includes background, theory, instrumentation, application which covers both the production of the ion exchange substance, a resin and its operation depending on the condition of matrix during use.

INTRODUCTION:
Chromatography literally means “colour writing”. Ion exchange chromatography involves the separation of ionizable molecules based on their total charge. This technique enables the separation of similar types of molecules that would be difficult to separate by other techniques because the charge carried by the molecule of interest can be readily manipulated by changing buffer pH. Columns used for ion exchange are characterized by the presence of the charged group covalently attached to the stationary phase. Anion exchanger contains bounded positive groups, where as cation exchanger contains bounded negative groups.

BACKGROUND:
The phenomenon of ion exchange was first reported by two British Agricultural Chemists and date back to 1850. After the work of Gans in 1913 natural and synthetic (soils, clays and Zeolites) inorganic cation exchangers were used for softening of hard water. Modern ion exchange resins were first used by Adams and Holms in 1935 in which large variety of synthetic resins have been developed [1]. This technique has been developing since 19th century which was firstly used for purification of drinking water.


PROPERTIES OF ION EXCHANGE CHROMATOGRAPHY:
The most common properties of all ion exchangers which have been used in analysis are:
* It should be almost insoluble in water and organic solvents, like benzene, carbon tetrachloride, ether etc.
* It should be complex in nature and in fact they are polymeric.
* It should contain active or counter ions that will leads to exchange reversibility with other ions in a surrounding solution without any substantial change in the material [9-12].

ADVANTAGES:
* Detectability: Useful for the detection of many inorganic salts and also for the detection of organic ions with poor UV absorptivity likes alkyl amines or sulfonates.
* Preparative separations: Usually preferred because of the availability of volatile buffers. Volatile buffer makes the removal of mobile phase easier.
* Useful to resolve very complex samples i.e., in the case of multi-step separation.
* Useful for separation of mixture of biological origin, in organic salts and some organometallics.
* Provides long life to resin [1, 2].
* Cheap maintenance
* Environmental friendly because it deals only with substance occurring in water.

Anionic exchangers:
It has positively charged groups, which will attract negatively charged molecules. This exchanger is termed as basic ion exchange materials since their positive charges generally result from the association of protons with basic groups. Based upon the affinity of ions towards the matrix the ions like cation and anion are separated. The ions that have less affinity towards matrices will elute first and the ions that have more affinity towards matrices it will elute later [3-12].

ION EXCHANGERS:
Ion-exchange processes are used to separate and purify metals, including separating uranium from plutonium and other actinides, including thorium and lanthanum, neodymium, ytterbium, samarium, lutetium, from each other and the other lanthanides.
There are three classes of ion exchangers, these includes
1.  Resins
2.  Gels
3.  Inorganic exchangers 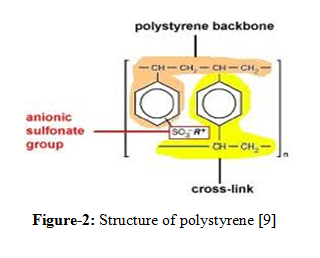 General requirements of resins:
It should be chemically stable.
It should be insoluble in most of the common solvents.
It should have high degree of exchange of ions.
If it swells then it should be denser than water molecule.
It must contain sufficient number of ion exchange groups.