ABSTRACT
Brain is the highly protected organ of the body by the sanctuary known as blood brain barrier (BBB). BBB comprises of tight junctions formed by the closed fenestration network of astrocytes, pericytes microglial cells and endothelial cells. Thus it is very difficult for drug molecules to cross BBB. Thus various approaches are discussed to overcome this barrier. Disruption of BBB was conventional invasive approach. The permeability of BBB increases in various diseases. This increased permeability of BBB is made use for drug trafficking. With advances in nanotechnology, various nanocarrier systems including Polymeric nanoparticles, Micelle, Dendrimer, Liposomes, Solid lipid nanoparticles, Nanostuctured lipid carriers, nanogels, etc. emerged as potential delivery systems.
Administration of inhibitors of p-glycoprotein with drug is another approach. Making lipophilic prodrugs of active drug substances can also be done.
Recently PEGylation of nanoparticles can be done to improve its half life in the body, known as the stealth technology. Further various receptor mediated processes are made use of for transport of nanocarrier across BBB. In this method the nanocarrier is attached to the targeting ligand thus making it receptor specific. The newer concept of molecular Trojan horses is also discussed. Finally the advantages of intranasal drug delivery are emphasized.

INTRODUCTION
Brain is a delicate organ and evolution built very efficient ways to protect it. Unfortunately, the same mechanisms that protect it against intrusive chemicals can also frustrate therapeutic interventions. Many existing pharmaceuticals are rendered ineffective in the treatment of cerebral diseases due to our inability to effectively deliver and sustain them within the brain. General methods that can enhance drug delivery to the brain are therefore of great interest.
Brain disorders are of significant global, social and economic concern with about 1.5 billion people affected globally. Neurological disorders, inflammatory and infectious conditions of brain, brain cancer and brain stroke are rapidly escalating. HIV infection is now pandemic and around 33.2 million people suffer worldwide. Further, statistics of brain cancer patients reveal a grim picture, with the incidence of afflicted population slowly increasing and survival rates of less than 25% after 5 years. [1]

More than 95% of drugs for delivery to the brain are limited by the formidable blood-brain barrier (BBB). Administration of high dose to attain adequate brain drug concentration results in severe side effects. Overcoming the BBB therefore represents an important step in brain targeting. The direct approach is the invasive approach which could permit direct administration of drugs into the brain tissue. This however necessitates drilling a hole in the cranium and involves surgical intervention. Non-invasive strategies could provide a lower risk and a more patient friendly approach. This has triggered enormous interest in colloidal drug delivery systems for delivery to the brain. Micelles, polymeric nanoparticles, lipid nanoparticles and liposomes have been evaluated and it has been generally observed that lipidic carriers can traverse the BBB more rapidly.

RATIONALE
With the newer advances in nanotechnology the newer approaches are coming up with the virtue of delivery of drugs across BBB. The idea behind improving BBB penetration is either to lipidise the drug or load it into suitable nanocarrier system.
This nanocarrier will then act as a transporting vehicle to the brain on account of its nanosize and lipophilic properties.
The recent advances include coupling of a ligand resembling to the endogenous substance to the nanocarrier. It will thus enable the nanosystem to target selectively to the receptors at the brain endothellium.these strategies include receptor mediated endocytosis, adsorptive endocytosis, etc.
Thus it can be said that ‘the delivery system would resemble a travelling vehicle, Drug being the passenger nanocarrier as the vehicle and targeting ligand as the driver.”

BRAIN
The brain is an integral part of the central nervous system acting as a major regulating and communicating organ to maintain the body’s homeostasis in response to changes in both the external and internal environment.
The primary cells of the brain include nerve cells (neurons) and supporting glial cells (glia). An adult human has approximately 100 billion neurons and 1 trillion glialcells. The neurons and glial cells organize into specialized structures within the brain that can be characterized by both a unique architecture and function. Structures can be classified as either gray or white matter, areas of the brain dominated by cell bodies and axonsrespectively.

The three major subdivisions of the brain are the cerebrum, cerebellum, and the brain stem. The cerebrum is the largest section and is easily divided into the right and left hemispheres along the mid-sagittal plane. These hemispheres are made up of an outer layer of gray matter, the cerebral cortex, which is responsible for functions such as language and information processing. The cortex, made up of nearly 25 billion neurons, is highly convoluted, increasing the surface area to ¨2300 cm2. Cerebral cortex cells communicate with each other and with the spinal cord via the underlying cerebral white matter; communication between the two cerebral hemispheres primarily occurs via a major white matter tract called the corpus callosum. The cerebellum contains a similar gray and white matter organization but at a smaller scale, functioning primarily to control balance and coordinated movement. The brain stem, responsible for involuntary functions such as heart rate and breathing, connects the brain to the spinal cord. It contains both gray and white matter regions but they are not organized into an inner and outer layer as in the cerebrum and cerebellum.

The majority of brain tumours occur in the parenchyma space of the cerebrum. However, more so than in any other tissue, getting drugs into the brain is much more difficult than getting drugs out of the brain. Brain tissue is protected externally by the skull, which constrains the volume and regulates intracranial tissue pressure. Internally, the BBB greatly limits permeability and transport across the endothelial cell membranes of the blood vessels

Fig.1 Human brain
a) major parts of brain
b) composition of brain in terms of volume[2]

Blood Brain Barrier
BBB was first noticed by Paul Ehrlich in 1885 and later confirmed by Edwin Goldmann. BBB is located at the level of brain capillaries, where there is a convergence of different cell types endothelial cells, pericytes, astrocytes and microglias (perivascular macrophages). The brain micro vessel endothelial cell (BMEC) that form the BBB, display important morphological characteristics such as the presence of tight junctions between the cells, the absence of fenestrations and a diminished pinocytics activity, that together help to restrict the passage of compounds from the blood into the extra cellular environment of the brain. This barrier permits the exchange of essential gases and nutrients between the bloodstream and the brain, while blocking larger entities such as microbes, immune cells and most drugs from entering.
This barrier system is a perfectly logical arrangement, since the brain is the most sensitive and complex organ in the human body and it would not make sense for it to become the battleground of infection and immune response. This biological demilitarization zone is enforced by an elaborate and dense network of capillary vessels that feeds the brain and removes waste products. Each capillary vessel is bound by a single layer of endothelial cells, connected by tight junction-zona occludens thereby making it very difficult for most molecules to exit the capillaries and permeate into the brain. Tight junctions provide significant transendothelial electrical resistance (TEER) to BMEC and impede the penetration of potential therapeutic agents such as oligonucleosides, antibodies, peptides and proteins. Furthermore, BMEC express a variety of enzymes, both cytosolic and on the extra cellular membrane which also contribute to the restrictive nature of the BBB. P-glycoprotein (P-gp) is also present in the luminal plasma membrane of BMEC.This is an ATP-dependant efflux pump and a member of a family of intrinsic membrane proteins.P-gp is known to prevent the intracellular accumulation of an extensive variety of chemotherapeutic agents and hydrophobic compounds.[3] 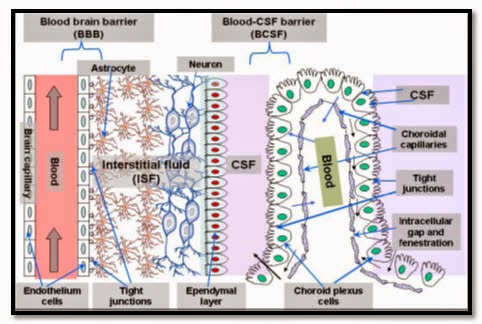 Blood-Cerebrospinal Fluid Barrier
The second barrier that a systemically administered drug encounters before entering the CNS is known as the Blood-cerebrospinal fluid barrier (BCB). Since the CSF can exchange molecules with the interstitial fluid of the Brain parenchyma, the passage of blood-borne molecules into the CSF is also carefully regulated by the BCB. Physiologically, the BCB is found in the epithelium of the choroids plexus, which are arranged in a manner that limits the passage of molecules and cells into the CSF.
The choroid plexus and the arachnoid membrane act together at the barriers between the blood and CSF. On the external surface of the brain the ependymal cells fold over onto themselves to form a double layered structure, which lies between the dura and pia, this is called the arachnoid membrane. Within the double layer is the subarachnoid space, which participates in CSF drainage. Passage of substances from the blood through the arachnoid membrane is prevented by tight junctions. The arachnoid membrane is generally impermeable to hydrophilic substances, and its role is forming the Blood-CSF barrier is largely passive.
The choroid plexus forms the CSF and actively regulates the concentration of molecules in the CSF. The choroid plexus consist of highly vascularised. The preponderance of choroid Plexus is distributed throughout the fourth ventricle near the base of the brain and in the lateral ventricles inside the right and left cerebral hemispheres. The cells of the choroidal epithelium are modified and have epithelial characteristics. These ependymal cells have microvillus on the CSF side, basolateral interdigitations, and abundant mitochondria. The ependymal cells, which line the ventricles, form a continuous sheet around the choroid plexus. While the capillaries of the choroid plexus are fenestrated, non-continuous and have gaps between the capillary endothelial cells allowing the free-movement of small molecules, the adjacent choroidal epithelial cells form tight junctions preventing most macromolecules from effectively passing into the CSF from the blood. However, these epithelial-like cells have shown a low resistance as compared the cerebral endothelial cells, approximately 200 .cm2 between blood and CSF.

In addition, the BCB is fortified by an active organic acid transporter system in the choroids plexus capable of driving CSF-borne organic acids into the blood. As a result a variety of therapeutic organic acids such as the antibiotic penicillin, the anti-neoplastic agent methotrexate, and the antiviral agent zidovudine are actively removed from the CSF and therefore inhibited from diffusing into the brain parenchyma.

Furthermore, substantial inconsistencies often exist between the composition of the CSF and interstitial fluid of the brain parenchyma, suggesting the presence of what is sometimes called the CSF-brain barrier. This barrier is attributed to the insurmountable diffusion distances required for equilibration between the CSF and the brain interstitial fluid. Therefore, entry into the CSF does not guarantee a drug’s penetration into the brain.[3]

TRANSPORT MECHANISMS AT THE BLOOD–BRAIN BARRIER

A.Paracellular (aqueous) diffusion: Small water-soluble molecules can diffuse through the BBB by apparently passing through the tight junctions

B.Transcellular (lipophilic) diffusion: In the transcellular lipophilic pathway, lipid-soluble substances such as O2, CO2, alcohol and steroid hormones can penetrate endothelial cells easily by dissolving in their lipid plasma membrane

C.Saturable (carrier-mediated) transport: this transport system involves transfer of solute by means of a carrier. This is a active type of transport requiring ATP. This process is saturable.

D. Receptor mediated endocytosis-this involves coupling of the solute molecule with the receptor and further this complex is endocytosed and transported to the other end. The complex then dissociates and solute molecule is exocytosed.

E. Adsorptive mediated endocytosis-this transport is similar to RME but it involves electrostatic attraction between solute and receptor.