AFTERSHAVE: A TRUTH BEHIND ICONIC FRAGRANCE

ABSTRACT:
Aftershave is an important part of a man’s daily lifestyle routine. After shave is a liquid product applied to skin after shaving. It contains an antiseptic agent such as denatured alcohol, stearate/citrate or witch hazel to prevent infection of cuts, as well as to act as an astringent to reduce skin irritation. Menthol is used in some varieties as well to numb damaged skin and it is an ingredient that shaving cream manufacturers have started including in their formulations, too. Aftershave with alcohol usually causes an immediate burning sensation when applying it post-shave, with effects sometimes lasting several minutes, but most commonly only for seconds. For this reason, a market consisting of highly differentiated products has been created—some using alcohols, some not. Some aftershaves use fragrance or essential oil to enhance scent. Moisturizers—natural and artificial, are often touted as able to soften the skin. Rinse your face and neck with cool water next to help close up your pores before you apply the aftershave. Do not apply aftershave immediately after you have finished shaving since doing so might make your skin sore or irritated. Pat your face and neck dry gently with a towel. As you shave, feel free to keep applying shaving cream. When you're done shaving, wash the area generously with lots of warm water. When you shave, shower in warm water first to soften skin, then lubricate with a shaving cream or lotion, never dry shave. Assure you use a clean, sharp, razor and shave in the direction of hair growth. Once shaven those hair follicles are open, clean area well and apply a gently aftershave lotion or aloe vera gel. Keywords: Cologne, Moisturizer, Humectant, Denatured alcohol, Polyquaternium-10, Allantoin, Styptic

INTRODUCTION
Aftershave is a balm, lotion, wash or salve applied to the skin after shaving, as noted in The Art of Shaving. Frequently marketed toward men, aftershave products reduce the number of steps in a skincare routine. Although some aftershaves are nonsense; their only goal is to soothe the irritation caused by shaving; many commercially available aftershaves work as moisturizers, toners and cologne.[1]

Antiseptics: Shaving often results in minor cuts, abrasions and irritation. Antiseptic ingredients are included in aftershave to help minimize the risk of infection to these often small wounds. Alcohol-based aftershaves include SD-alcohol 40, an antiseptic that also functions as the base ingredient in the aftershave. About SD alcohol 40: Specially denatured (SD) alcohol is a mixture of ethanol with a denaturing agent. Ethanol is considered broadly toxic and linked to birth defects following excessive oral ingestion. Alcohol-free aftershaves may include polyquaternium-10 (Quaternized hydroxyethyl cellulose), an antiseptic that also functions as a preservative and surfactant. Hydroxyethyl cellulose is a gelling and thickening agent derived from cellulose. It is widely used in cosmetics, cleaning solutions and other household products. Hydroxyethyl cellulose and methyl cellulose are frequently used with hydrophobic drugs in capsule formulations, to improve the drugs' dissolution in the gastrointestinal fluids. This process is known as hydrophilization. It is also a key ingredient in the formation of big bubbles as it possesses the ability to dissolve in water but also provide structural strength to the soap bubble.

Polyquaternium-10 extends the shelf life of aftershave products, keeping potentially harmful microorganisms from growing in the formula. Polyquaternium is the International Nomenclature for Cosmetic Ingredients designation for several polycationic polymers that are used in the personal care industry. Polyquaternium is a neologism used to emphasize the presence of quaternary ammonium centers in the polymer. INCI has approved at least 37 different polymers under the polyquaternium designation. Different polymers are distinguished by the numerical value that follows the word "polyquaternium". Polyquaternium-5, polyquaternium-7 and polyquaternium-47 are three examples, each a chemically different type of polymer. The numbers are assigned in the order in which they are registered rather than because of their chemical structure. Polyquaterniums find particular application in conditioners, shampoo, hair mousse, hair spray, hair dye and contact lens solutions. Because they are positively charged, they neutralize the negative charges of most shampoos and hair proteins and help hair lie flat. Their positive charges also ionically bond them to hair and skin. Some have antimicrobial properties. Witch hazel is a natural antiseptic and astringent that may be present in aftershaves marketed as using natural ingredients. Witch hazel functions similarly to SD-alcohol 40, closing the pores and exerting antiseptic properties, but is derived from the oil of the Hamamelis virginiana tree.[2]

Moisturizers: Aftershave restores softness to skin after shaving; aftershave products include moisturizers to achieve this goal. Glycerin, a byproduct of soap making, is a hygroscopic ingredient found in many aftershave products. Glycerin draws moisture from the air to the skin, allowing freshly shaved skin to become supple again. Some aftershave products are oil based instead of alcohol based. Oil-based aftershaves may aggravate acne, though people with drier skin or those with sensitivity to alcohol may prefer them. Olive oil is mild oil expressed from the Olea europaea tree that is used to impart moisture and restore softness to skin when used in aftershave. Allantoin is an anti-inflammatory chemical. It also serves to moisturize the skin. A natural ingredient that works similarly to allantoin is aloe vera, extracted from the Aloe barbadensis leaf.
Allantoin is a chemical compound with formula C4H6N4O3. It is also called 5-ureidohydantoin or glyoxyldiureide. It is a diureide of glyoxylic acid. Allantoin is a major metabolic intermediate in most organisms including animals, plants and bacteria and is produced as a degradation product of purine nucleobases by urate oxidase (or uricase) from uric acid. Allantoin is present in botanical extracts of the comfrey plant and in the urine of most mammals. Chemically synthesized bulk allantoin, which is chemically equivalent to natural allantoin, is safe, non-toxic and compatible with cosmetic raw materials and meets CTFA and JSCI requirements. Over 10,000 patents reference allantoin.

Cosmetics and toiletries: Manufacturers cite several beneficial effects for allantoin as an active ingredient in over-the-counter cosmetics, including: a moisturizing and keratolytic effect, increasing the water content of the extracellular matrix and enhancing the desquamation of upper layers of dead skin cells, increasing the smoothness of the skin; promoting cell proliferation and wound healing; and a soothing, anti-irritant and skin protectant effect by forming complexes with irritant and sensitizing agents. An animal study in 2010 found that based on the results from histological analyses, a soft lotion with 5% allantoin ameliorates the wound healing process, by modulating the inflammatory response. The study also suggests that quantitative analysis lends support to the idea that allantoin also promotes fibroblast proliferation and synthesis of the extracellular matrix. A study published in 2009 reported the treatment of pruritus in mild-to-moderate atopic dermatitis with a topical non-steroidal agent containing allantoin.

Pharmaceuticals: It is frequently present in toothpaste, mouthwash and other oral hygiene products, in shampoos, lipsticks, anti-acne products, sun care products and clarifying lotions, various cosmetic lotions and creams and other cosmetic and pharmaceutical products.

Biomarker of oxidative stress: Since uric acid is the end product of the purine metabolism in humans, only non-enzymatic processes with reactive oxygen species will give rise to allantoin, which is thus a suitable biomarker to measure oxidative stress in chronic illnesses and senescence.

Fragrance: Aftershaves are mostly scented. Individuals with sensitivities to fragrances may prefer an unscented aftershave lotion to avoid headaches, skin irritation or any number of other effects that may accompany exposure to a strong scent. Aftershaves that are scented may include chemical fragrances, often listed among ingredients lists simply as fragrance or perfume. A label with those ingredients may contain up to 4,000 different chemicals. Since scents are often proprietary formulas, the exact chemical makeup may not be revealed. Green or organic aftershave products may include a number of essential oils. Sandalwood, musk, patchouli oil and sage are popular essential oils in aftershave. A styptic (also spelled stiptic) is a specific type of antihemorrhagic agent that works by contracting tissue to seal injured blood vessels. Styptic pencils contain astringents. Antihemorrhagic agents used in medicine have various mechanisms of action: 1. Systemic drugs work by inhibiting fibrinolysis or promoting coagulation. 2. Locally-acting hemostatic agents work by causing vasoconstriction or promoting platelet aggregation.[3] 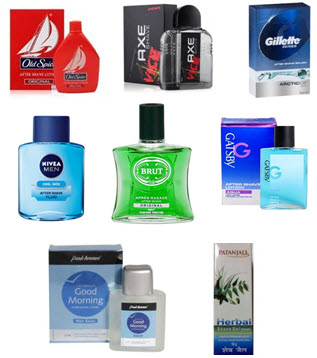 Old Spice [It opens with spicy, citrusy top notes: nutmeg, lemon, orange, star anise & aldehydes. Then the floral heart becomes apparent with carnation, jasmine, geranium, cinnamon, heliotrope, & pimento. All this is laid on a base of ambergris, benzoin, cedar, vanilla, tonka bean, and musk. Real men wear Old Spice!]
Axe [Water, Denatured alcohol, Stearate citrate, Menthol, Fragrance, Essential oil, Astringents & Antiseptics]
Gillette [water/EAU, aluminum starch octenylsuccinate, glycerin, myristyl propionate, mineral oil/huile minérale, phenoxyethanol, fragrance.]
Aftershave is sometimes mistakenly referred to as eau de cologne due to the very similar nature of the two products. Some aftershave manufacturers encourage using their fragranced aftershave as if it were cologne, in order to increase sales by encouraging consumers to use it in a more versatile manner, rather than just after a shaving session. Some aftershaves were inspired by cologne. Early aftershaves included witch-hazel and bay rum and have been documented in shaving guides. Both still are sold as aftershaves. Potassium alum, potash alum, or potassium aluminum sulfate is a chemical compound: the potassium double sulfate of aluminium. Its chemical formula is KAl(SO4)2 and it is commonly found in its dodecahydrate form as KAl(SO4)2•12H2O. Alum is the common name for this chemical compound, given the nomenclature of potassium aluminum sulfate dodecahydrate. It is commonly used in water purification, leather tanning, dyeing, fireproof textiles and baking powder. It also has cosmetic uses as a deodorant, as an aftershave treatment and as a styptic for minor bleeding from shaving. Shaving products are used to assist in the removal of unwanted body hair, to ease shaving by women and men and include products such as shaving soaps and creams as well as pre- and after shaving lotions.[4]