A Short Communication on Molecular approaches of Morphine Opioids 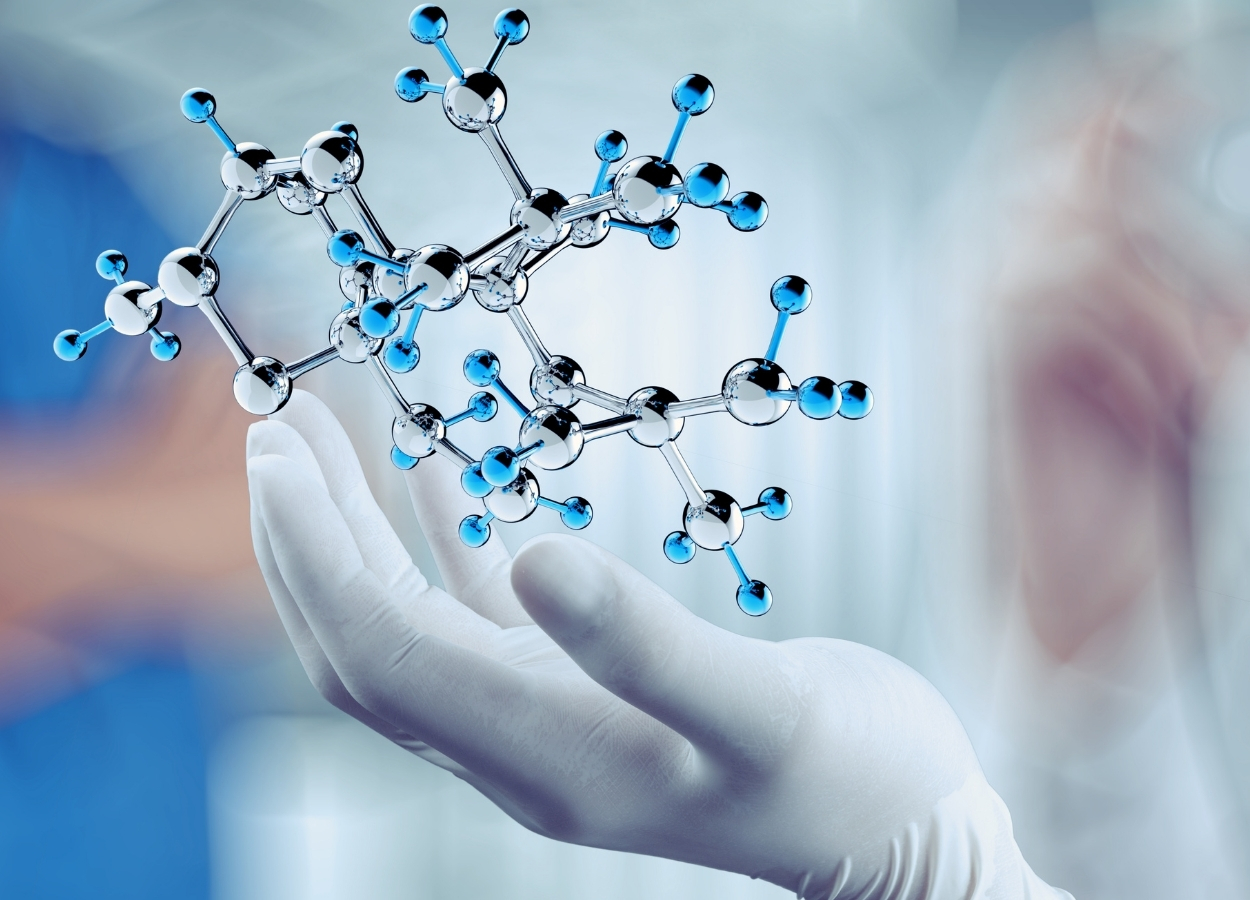 ABSTRACT
Opioids are powerful painkillers that act on the brain but they produce harmful side effects including addiction. Various heterocyclic compounds have appeared owing to the extensive varieties of their pharmacological activities. Opioids perform their action by interacting with three types of opioids receptors (δ), (μ) and (κ). The opioid receptors are G proteins having inhibitory activity. They close N-type voltage-gated calcium channels and open inwardly rectifying potassium channels. This results in hyperpolarization and a reduction in neuronal excitability which modulates the release of nociceptive neurotransmitters. This mini-review describes Chemical features with Pharmacological action of morphine analogs.

Nowadays Pain is a common reason to visit a physician clinic for consultation. It is a major symptom in many medical conditions, significantly interfering with a person's quality of life and general functioning. Diagnosis is based on characterizing pain in various ways, according to duration, type, source or location in the body. Usually, the pain stops without treatment or responds to such as resting or taking an analgesic and it is then called acute pain. But it may also become severe called chronic pain in which pain is no longer considered a symptom but an illness by itself.

Pain is the most common symptom for which patients seek medical advice and treatment. Pain can be acute or chronic. While acute pain is usually self-limited, chronic pain can persist for 2 to 3 months or longer and lead to significant changes in a patient's lifestyle. The opioid drugs have the potential to produce analgesia, physical dependence, and tolerance effect. Opioid drugs act in both the central and peripheral nervous systems. Within the central nervous system, opioids have effects in many areas, including the spinal cord. In the peripheral nervous system, actions of opioids are responsible for the powerful constipating effect of opioids. In peripheral tissues such as joints, opioids act to reduce inflammation. There are various types of opioids are available in which some of them are given below.2 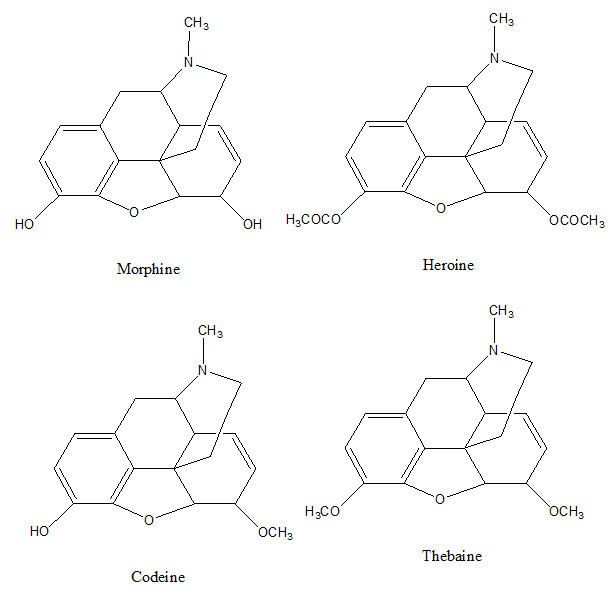 Codeine is an alkaloid obtained by methylation of morphine. It is colorless crystal and soluble in water. It is metabolized by O and N-demethylation in the liver to morphine and norcodeine. It is a weak analgesic but used in the treatment of cough. Codeine linctus and codeine phosphate sulfate tablets with oral solutions are found in the market.

Opioids drugs are associated with the following Chemical features : 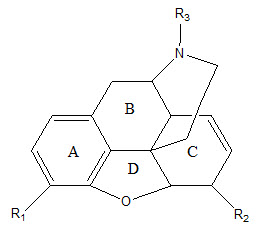 • Morphine analogs consist of three rings and this nucleus is known for the Morphinan nucleus.
• In A-Ring, if R1 is replaced with OH group, it will describe the potency of Morphine but if OH is replaced with OCOCH3 that will produce more analgesic activity.
• B ring which is an unsubstituted phenyl nucleus is attached to the basic nitrogen atom as amine by an unbranched chain of three atoms.
• The C-Ring of morphine is a six-membered ring of carbon atoms (Cyclohexene) below the plane of ring B, Having a Double bond between C7 and C8 and free hydroxyl group below its plane in C6.
• Removal of OH group and saturation of double bond leads to desomorphine-D. It is 10 times more potent than morphine. 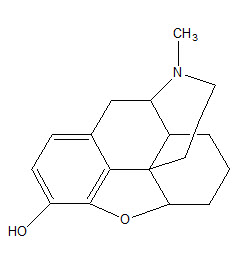 • Acetylation of phenolic OH group in position 3 of morphine is compatible with high analgesic potency.
• All other known chemical changes on the aromatic ring have invariably produced a very striking loss of activity.
• Replacement of NCH3-Moiety by other chemical groups reduces analgesic activity.
• The Morphinans are ring B/C cis-structures while A or B/C trans-isomer has been prepared.

Opioids produce effects on neurons by acting on receptors located on neuronal cell membranes. Three major types of opioid receptors were defined. These receptors belong to the large family of receptors which possess 7 trans-membrane spanning domains of amino acids (G-Protein). Opioid receptors (δ), (μ) and (κ) receptors are apparent in both central and peripheral nervous systems of many species. 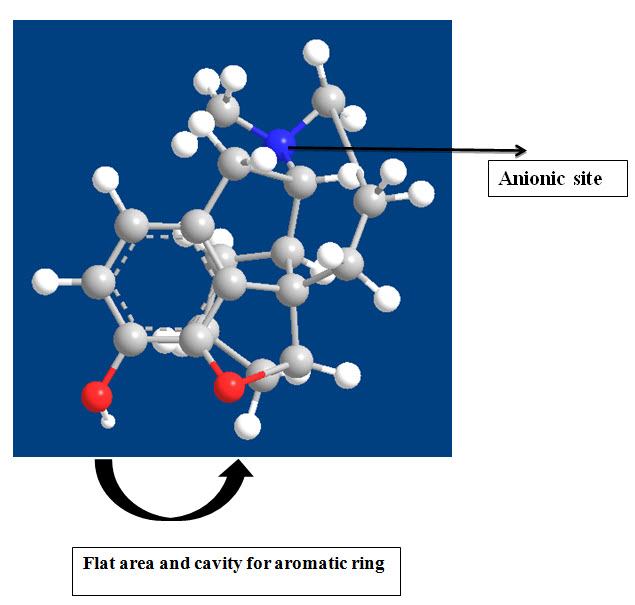 Opioids have actions at two sites, the presynaptic nerve terminal and the postsynaptic neuron. The postsynaptic actions of opioids are usually inhibitory. The presynaptic action of opioids is to inhibit neurotransmitter release and this is considered to be their major effect in the nervous system. Neurotransmitter release from neurons is normally preceded by depolarisation of the nerve terminal and Ca++ entry through voltage-sensitive Ca++ channels. Opioids have been proposed to inhibit neurotransmitter release by inhibiting calcium entry or by enhancing the outward movement of potassium ions. This effect occurs in several brain regions for the postsynaptic hyperpolarisation and inhibition of neurons induced by opioids throughout the nervous system. Adenylate cyclase is an enzyme that breaks down adenosine triphosphate (ATP) to form cyclic adenosine monophosphate (cAMP) in the normal cell cycle. All 3 types of opioid receptors coupled to adenylate cyclase. Inhibition of adenylate cyclase may result in the inhibition of neurotransmitter release. 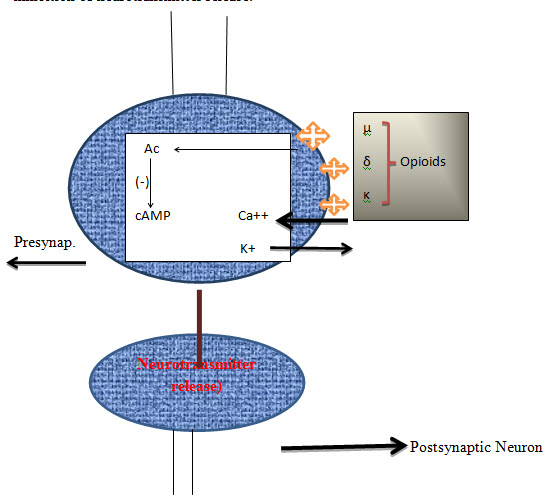 Tolerance and dependence are induced by chronic exposure to morphine and other opioids more than any other group of drugs. Tolerance means that higher doses of opioids are required to produce an effect. When the degree of tolerance is very marked, the maximum response attainable with the opioid is also reduced. Tolerance is mainly due to receptor de-sensitization induced by functional uncoupling of opioid receptors from G-proteins, thus uncoupling the receptors from their effector systems. However, the mechanism of this desensitization is still not fully understood. Many studies have shown that the drugs can make patients more pain-sensitive, prolonging their discomfort and increasing their risks of developing chronic pain.4

Although dependence usually accompanies tolerance, they are distinct phenomena. Dependence is masked until the opioid drug is removed from its receptors, either by stopping the drug or by giving an opioid receptor antagonist such as naloxone. A withdrawal or abstinence response then occurs. The withdrawal response is very complex and involves many brain regions. Dependence occurs much more rapidly than tolerance, and naloxone-precipitated withdrawal can be seen after a single dose of morphine in humans. Adenylate cyclase has long been implicated in opioid withdrawal and increased adenylate cyclase activity following chronic morphine treatment has been observed in the locus ceruleus, a central noradrenergic cell group that is considered to play a major role in opioid withdrawal. However, the mechanisms involved in other brain regions remain to be elucidated.4

Thus these morphine analogs are used in the management of pain, chronic pain, cough suppression, in treatment of diarrhea, in management of edema, in intraoperative adjunctive agents in anesthesia. Narcotic analgesic causes side effects that limit their use. These opioids include respiratory depression, nausea, vomiting, constipation, urine retention, perspiration and itching, opioids cause dependency and addiction.

Conclusion
The process of inhibition of neurotransmitter release is considered to be the major mechanism of action that is responsible for the clinical effects of opioids. Morphinan nucleus having a major role in opioid action. As per the current hypothesis regarding mechanisms of action of opioid inhibition, mu (μ) receptor plays a vital role in pharmacophore designing. Recent advances in the molecular system of opioid receptors promise significant advances in opioids pharmacology and should reveal novel uses for opioids in the treatment of psychiatric and neurological disease.