Biomedical engineers at Duke University have developed a method to address failures in a promising anti-cancer drug, bringing together tools from genome engineering, protein engineering and biomaterials science to improve the efficacy, accuracy and longevity of certain cancer therapies.

Using a combination of CRISPR-based targeting, a protein "depot" that allows for sustained release of the drug and a highly potent binding system, the team showed that their new strategy could overcome three critical problems that limit the efficacy of many cancer drugs-- their limited potency, their quick elimination from the body, and the ability of cancer cells to develop resistance to the drug. 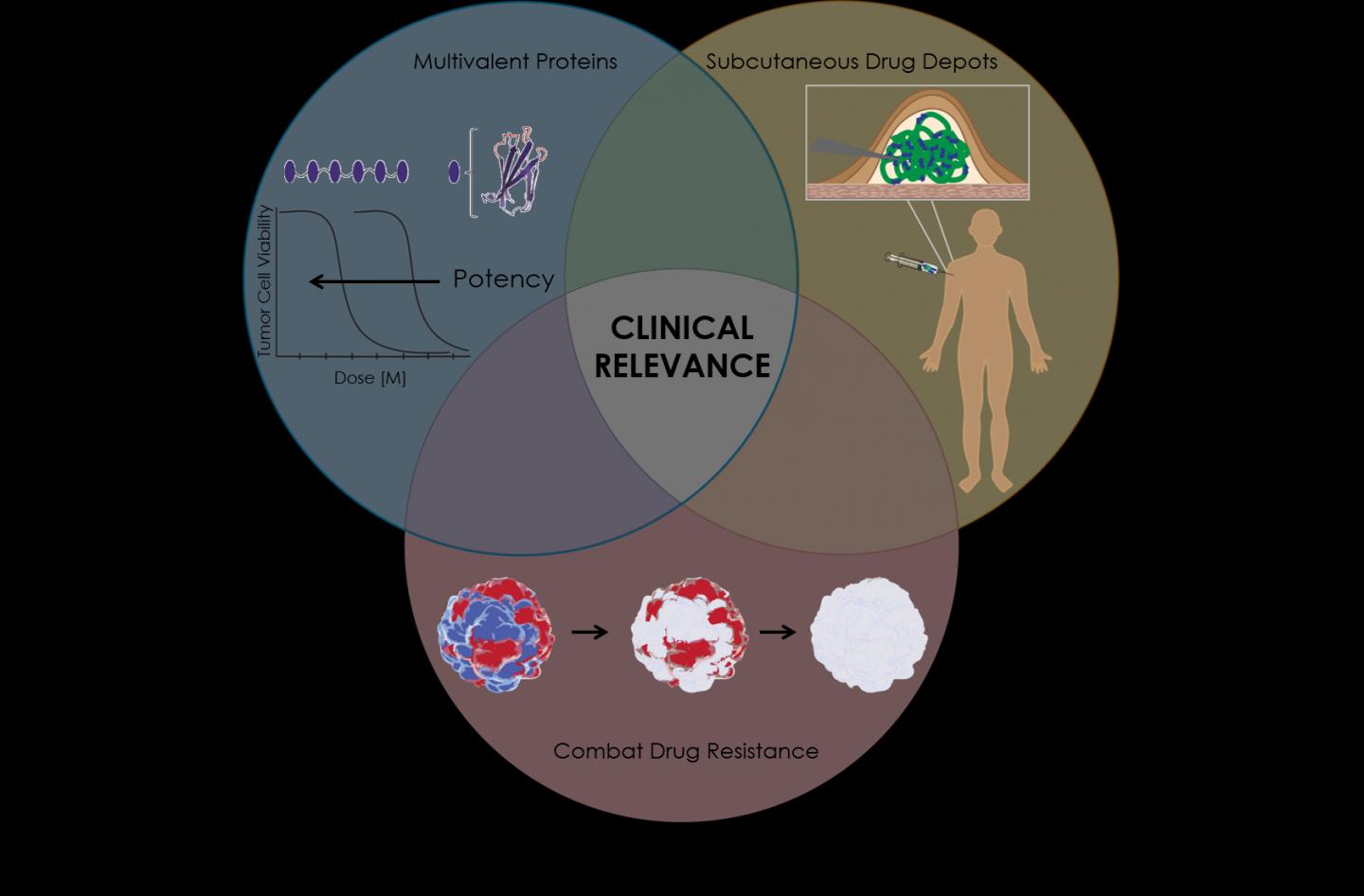 Caption : Recombinant proteins may become more important as anti-cancer biologic drugs if they can be delivered in selected combinations by a slow release gel. Credit : Mandana Manzari

After more study, scientists pinpointed three reasons why the promising drug failed: TRAIL wasn't potent enough, the drug was being cleared from the body too quickly and some cancer cells were resistant to the therapy.

Using a combination of three tools -  a highly potent protein drug, a "depot" that allows for sustained release of the drug, and CRISPR/Cas9 based gene editing to pinpoint the cause of resistance to the drug - the Duke team, which included Mandana Manzari, a recent PhD graduate, Ashutosh Chilkoti, the chair of Duke biomedical engineering, and Kris Wood, an assistant professor of pharmacology and cancer biology, demonstrated that their new strategy could provide a solution to these problems and give protein-based anti-cancer "biologics" like TRAIL that failed in the clinic a second chance.

"The real significance of this research for me is the true cross-disciplinary nature of it," said Manzari, first author on the paper and now a post-doctoral researcher at the Memorial Sloan Kettering Cancer Center in New York. "This is really the first example I've seen where we're bringing in pharmacology, drug delivery, and genomics to pinpoint the exact circumstances that cause a biologic to fail and then develop solutions."

The first step of the process involved addressing TRAIL's limited potency. Typically, cells have multiple death receptors, but a specific receptor called death receptor 5 (DR5) is more prevalent in certain cancer cells. TRAIL, a three-part protein, binds to DR5 and links three death receptors together, sending a signal for cells to self-destruct. TRAIL can also bind to other death receptors and "decoy" receptors on normal cells. A more potent drug would be specific for a given death receptor, like DR5 that is present on cancer cells, and link together larger numbers of the receptor on a cell surface to send a stronger death signal to the cancer cell.

Next, the team examined how to prevent the super-potent death receptor agonist from being cleared from the body too quickly. They genetically fused the DRA to a temperature-responsive protein called elastin-like polypeptide (ELP), which forms a gel-like "depot" within a room-temperature solution. After the solution is injected under the skin, it dissolves, releasing the DRA over a longer period of time.

Finally, Chilkoti and Manzari partnered with Kris Wood to better understand what caused certain cells to resist death by TRAIL or death receptor agonist (DRA). The team systematically disabled various genes in the cancer cells using CRISPR/Cas9 until they could deduce which were responsible for TRAIL or DRA resistance. Then they selected drugs to target the proteins produced by those genes and paired them with the DRA slow-release depot.

"This work opens another exciting avenue for targeting a critical cell death pathway in cancer, an area of increasing interest in the translational cancer therapeutics community," Wood said.

"When we figured out the genes that drive resistance, we were able to map them to commercially-available drugs that could specifically target the proteins that come from those genes," said Manzari. "It basically gave us a platform to figure out what drugs we can combine with the DRA in cases where this drug or other protein drugs don't work well to nip that resistance in the bud."

With their triple-whammy tool, the team was able to effectively overcome intrinsic resistance, repress tumor growth and extend survival in mice that were implanted with colorectal cancers from human patients that are highly resistant to treatment with TRAIL.

Now, the researchers are considering how they could apply this method to other protein and small-molecule drugs that face similar barriers that limit their effectiveness.

"I think the thing that really sets this approach apart is designing each piece of the platform rationally to address a specific problem and bringing them all together holistically to solve three critical problems that limit not just TRAIL, but many new cancer therapies," Chilkoti said.