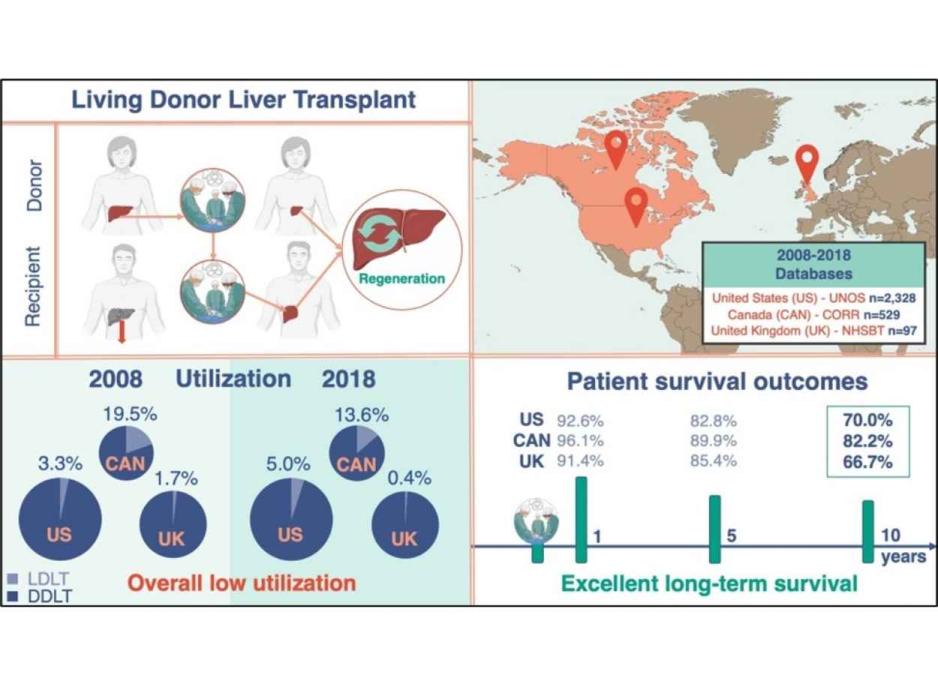 Demand for donor livers for transplant patients outstrips supply with over 15% of waitlist patients dying after a year. A new international study offers support for increasing the use of living donor liver transplantation (LDLT) in Western countries and reducing the imbalance between organ supply and demand. This study is reported in the Journal of Hepatology, the official journal of the European Association for the Study of the Liver, published by Elsevier.

LDLT is when a portion of the liver from a healthy living person is removed and placed into someone whose liver is no longer working properly. The donor's remaining liver regrows and returns to its normal size, volume, and capacity within a few months after the surgery. Although the waiting period for a deceased donor transplant can be over five years, LDLT remains uncommon compared to deceased donor liver transplantation (DDLT) in Western countries compared to those in Asia.

Identifying differences in outcomes and other transplant characteristics may help identify areas for healthcare improvement and clarify whether expanding LDLT practices can be justified in countries that rely primarily on DDLT.

“There has been a growing interest in strategies to alleviate the increasing demand for transplantation and the unacceptably high mortality on the liver transplant waitlist,” explained Gonzalo Sapisochin, MD, PhD, MSc, Division of General Surgery, University Health Network, Toronto, ON, Canada. “One such approach is LDLT, which can expand the number of grafts available for transplantation. However, short- and long-term outcomes need to be maintained for both the donors and recipients. We therefore sought to compare donor and recipient characteristics and post-transplant outcomes after LDLT.”

This is a retrospective multicenter study of adults aged 18 years or older who underwent primary LDLT between January 2008 and December 2018 as reported by three national liver transplantation registries: United Network for Organ Sharing (UNOS; US), National Health Service Blood and Transplantation (NHSBT; UK), and the Canadian Organ Replacement Registry (CORR; Canada). Patients undergoing retransplantation or multi-organ transplantation were excluded. Investigators compared recipient and donor characteristics, temporal trends, and post-LDLT outcomes across the three registries. In addition, they sought to evaluate outcomes for LDLT compared with DDLT within each of the countries.

This analysis of LDLT demonstrates that despite the low use of LDLT in Western countries compared to Asian countries, long-term survival is excellent. In addition, the mortality risk is not statistically significantly different between these three countries.

“This study offers support for increasing the use of LDLT in Western countries because it provides an opportunity to reduce the imbalance between organ supply and demand and, as a result, offers waitlist candidates the possibility of earlier transplantation and decreased mortality on the transplant waitlist," commented Dr. Sapisochin.