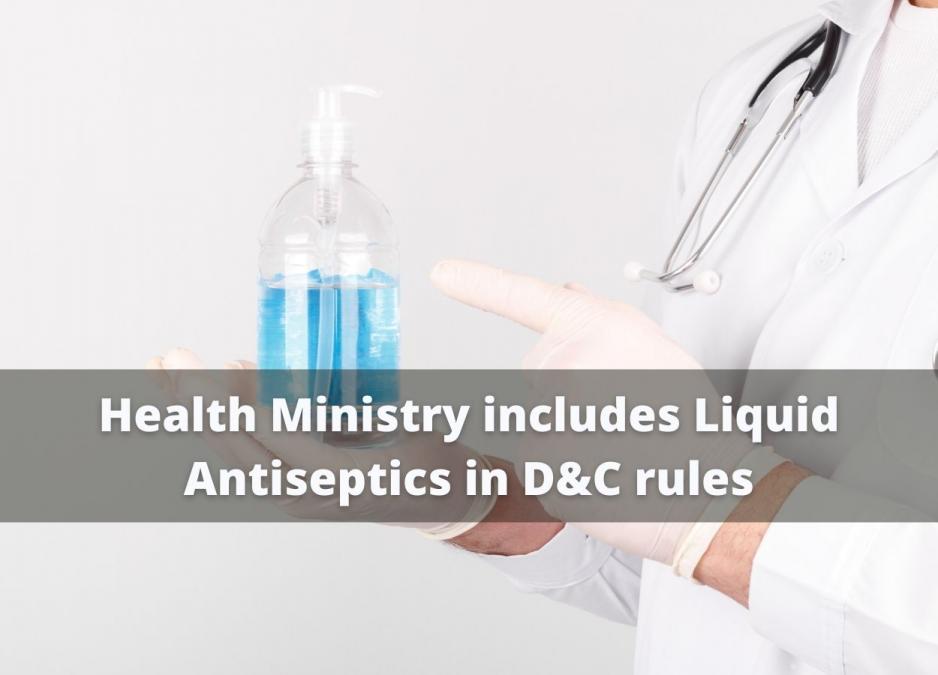 ​The Ministry of Health and Family Welfare includes Liquid Antiseptics for household use in schedule K after making an amendment in the Drugs Rules, 1945. Government had released draft notification with consultation with DTAB in September 2021. These rules may be called the Drugs 2nd Amendment Rules, 2022.

The provisions of Chapter IV of the Act and rules made which require them to be covered with a sale license in Form 20 or Form 20A. The changes are as the drugs are manufactured by licensed manufacturers; the drugs do not contain any substance specified in Schedule G, H, H1 or X.

In the Drugs Rules, 1945, in Schedule K, in the table, after serial number 38 and the entries relating thereto, the following serial number and entries shall be inserted, namely 39. It includes Liquid Antiseptics for household use.

Previously, the draft rules was published as required under sub-section (1) of section 12 and sub-section (1) of section 33 of the Drugs and Cosmetics Act, 1940 vide notification of the Government of India in the Ministry of Health and Family Welfare (Department of Health and Family Welfare) number G.S.R. 628(E), dated the 13th September, 2021, in the Gazette of India.

It is notable that DCC in its 55th meeting held on January 31 and February 1, 2019, has constituted a sub-committee under chairmanship of N K Ahooja, Drugs Controller, Haryana for clarification on exemption of Dettol antiseptic liquid (cloroxylenol, terpineol and alcohol) as antiseptic and disinfectant in the country under Schedule K (Rule 123) of Drugs and Cosmetics Rules 1945 and sub-committee identified such similar type of products and gave its recommendations.