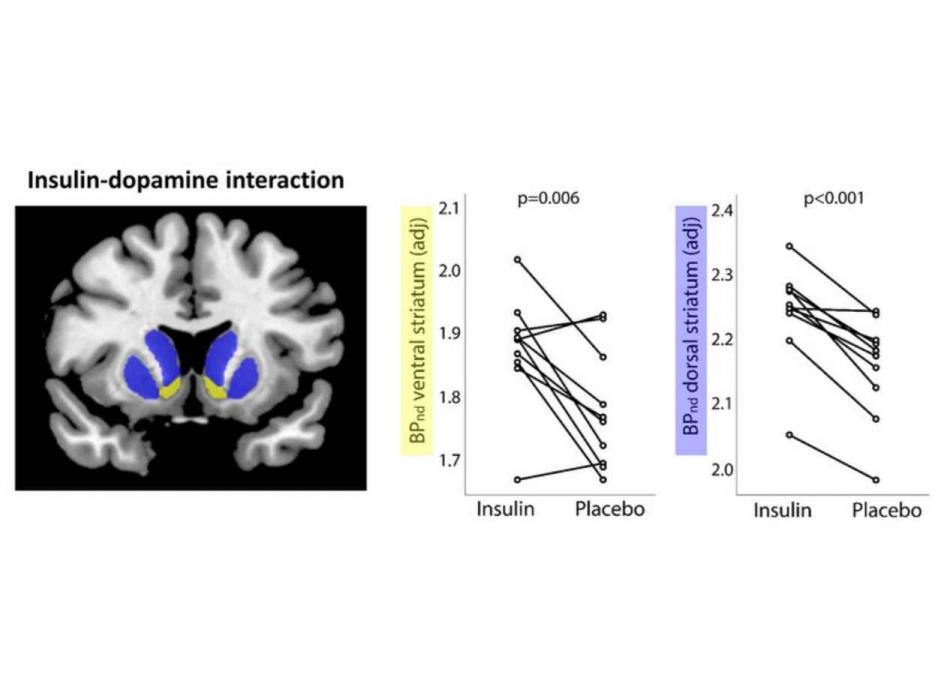 In the human brain, the hormone insulin also acts on the most important neurotransmitter for the reward system, dopamine. This was shown by researchers from the German Center for Diabetes Research (DZD) in Tübingen. Insulin lowers the dopamine level in a specific region of the brain (striatum*) that regulates reward processes and cognitive functions, among other things. This interaction can be an important driver of the brain’s regulation of glucose metabolism and eating behavior. The study has now been published in ‘The Journal of Clinical Endocrinology & Metabolism’.

Worldwide, more and more people are developing obesity and type 2 diabetes. Studies show that the brain plays an important role in causing these diseases. Dopamine is the most important neurotransmitter for the reward system. The hormone insulin is released after eating and regulates the metabolism in the human body (homeostatic system). It is not yet known how these two systems interact. However, changes in these systems have been linked to obesity and diabetes. In the current study, researchers from the Institute of Diabetes Research and Metabolic Diseases (IDM) of Helmholtz Zentrum München at the University of Tübingen, a partner of the DZD, and Tübingen University Hospital (Innere IV, Director: Prof. Andreas Birkenfeld) examined how the two systems interact specifically in the reward center of the brain, the striatum.

“Our eating behavior is regulated by the interaction between the reward system and homeostatic systems. Studies indicate that insulin also acts in dopamine-driven reward centers in the brain. It has also been shown that obesity leads to changes in the signaling of the brain that have a negative effect on the glucose metabolism in the whole body,” said first author Stephanie Kullmann. "We now wanted to decipher the interaction between the two systems in humans and find out how insulin regulates the dopamine system."   For this purpose, ten healthy, normal-weight men received insulin or a placebo via a nasal spray (randomized, placebo-controlled, blinded crossover study). When insulin is absorbed via the nose, it reaches the brain directly. To study the interaction between insulin and dopamine, the researchers used a unique measurement technique: they combined magnetic resonance imaging to assess functional brain activity and positron emission tomography to assess dopamine levels.

Analysis of the study showed that the intranasal administration of insulin lowered dopamine levels and led to changes in the brain's network structure. "The study provides direct evidence of how and where in the brain signals triggered after eating – such as insulin release and the reward system – interact," said Professor Martin Heni, last author of the study, summarizing the results. "We were able to show that insulin is able to decrease dopamine levels in the striatum in normal-weight individuals. The insulin-dependent change in dopamine levels was also associated with functional connectivity changes in whoe-brain networks. Changes in this system may be an important driver of obesity and related diseases."

In further studies, the researchers want to investigate changes in the interaction of dopamine and insulin in obese or diabetic participants. These people often suffer from insulin resistance in the brain. The researchers therefore assume that this resistance prevents the normal insulin-induced regulation of dopamine levels in the reward center. In further steps, they want to restore the normal action of insulin in the brain by behavioral and/or pharmaceutical interventions.

Image : Intranasal insulin induces an increase in the [11C] raclopride binding potential in the striatum, which indicates a decrease in the synaptic dopamine level. © IDM