ABSTRACT
Ficus racemosa it belongs to family Moraceae syn. Ficus glomerata Roxb. is the major group of angiosperm (flowering plant). They are widely distributed throughout Asia, Africa, America, Australia, Himalayan ranges, Punjab, Khasia Mountain, Bihar, Orissa, Rajasthan, Deccan, China, Indonesia and Malaysia. Udumber is used from ancient time for treating the many diseases. This tree is used traditionally for public health. It is also called yajnodumbara and grows all over the India at different areas. The common name is ‘Audumbar’ and ‘Umbar’ and used in Unani, Ayurveda and Homeopathy. The leaves tender are used in kalasha prokshana it is sprinkle water to different places from a scared copper mug and the bark is used in Homa. In review macroscopically studies, microscopically studies and chemical constituents are studied on different parts of the plant. Traditional uses and pharmacological uses are described, the extraction of leaves, fruit, stem, bark and latex are done due to this the important constituents are isolated in respective solvent like ethanol, methanol, acetone, petroleum ether, ethyl acetate and water. The more information is described below and the people are moving towards ayurvedic preparations.

INTRODUCTION
In our country many plants are used traditionally, among that few are used for treatment of several diseases. Moraceae family- consists of fifty genera and 1400 species. Over world 850 species of Ficus are found. About 80% of population use herbal medicines for primary healthcare estimated by the WHO. India is rich in traditional and medicinal plant used for public healthcare. People are moving more towards traditional plant rather than allopathic medicines.

Ficus racemosa also called as ‘Audumbar tree’ & ‘Umbar tree’ grown in Maharashtra. It spelled as ‘Cluster fig’ in English. (Paarakh et al., 2008) Common name is ‘Goolar’. The importance of indigenous medicines is coming from generation to generation.  India is one of rich country for plants resource and they are valuable medicines used in Ayurveda, Unani, Siddha and other system of medicines.

By isolating the important components from different parts of plant like: roots, stems, leaves, barks, flowers and fruits formulation can be made and used for many diseases like: Roots- hydrophobia, Barks- galactogogue, Fruits- blood disorders, dry cough, burning sensation, leprosy, menorrhagia, Leaves- astringent, bronchitis. The leaf of F. racemosa contains Flavonoids, triterpinoids, alkaloid and tannins. The fruit have glauanol acetate, tiglic acid, taraxasterol, lupeol acetate and many more constituents are present in other part of plant.

TAXONOMICAL CLASSIFICATION
“The study of the identification, taxonomy and nomenclature of organisms, including the classification of living things with regard to their natural relationships and study of variation and the evolution of taxa”. Classification of Ficus racemosa is given below: (Shah et al., 2016) 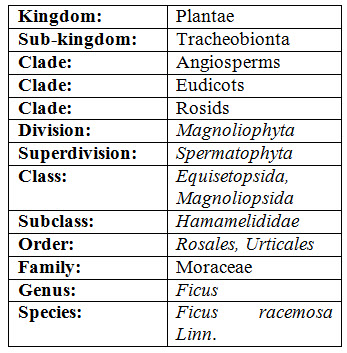 HISTORY
It is a one of the herb mentioned in all ancient scriptures of Ayurveda. Udumbara is considered sacred to God Dattaguru, has various synonyms like yajnanga, yajniya, yajnayoga and yajnyasara suggesting the use in ritual sacrifice. The ksiri viksa produced on cutting or plucking the leaf, latex oozes out. The plant is from a group, called pancavalkala. Maharishi Charaka has categorized Udumbara as anti-diuretic herb (mutra sangrahaniya). Susruta has described the properties of the plant, like astringent, promotes callus healing in fractures (bhagna sandhaniya) and useful in vaginal disorders. The plant was located on south-western coast (middle-earth) of the Bay of Belfalas, 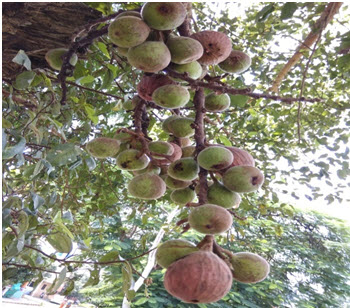 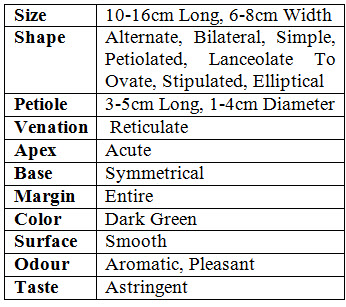 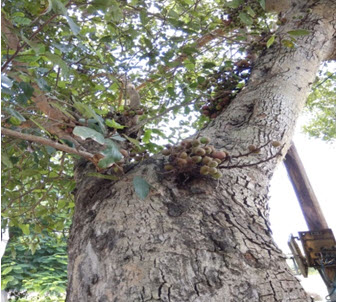 SPECIES OF FICUS
The different species of ficus belong to family Moraceae are given below:

Hypoglycemic activity: (Ushir et al., 2009)
Ficus racemosa shows hypoglycemic activity, to evaluate the study of hypoglycemia activity ethanol extract is used (250mg/kg/day, p.o.) lowering of blood glucose level was determined in 2 weeks. Alloxan diabetic albino rats they conforms hypoglycemic activity. Methanolic extract of stem bark also show glucose lowering activity at dose 200-400mg/kg, p.o. this test is done on normal and alloxan induced diabetic rats. Whereas, this activity was compared with standard antidiabetic agent glibenclamide at dose 10mg/kg it shows antidiabetic activity. Β-sitosterol isolated from stem bark it is more potent when compared with other isolated compound. Methanol extract of fruit given in 1,2,3, and 4g/kg it lowers the blood glucose level in normal and alloxan induced diabetic rabbits. α-amyrin acetate is important constituent isolated form fruits and the dose is given at 100gm/kg which lowers the blood glucose level in 5 to 24hrs gives result at 18.4% and 17.0% in sucrose when compared with streptoratocin induced diabetic rat model.

Hepatoprotective activity: (Deep et al., 2013).
The leaves extract and stem bark extract shows hepatoprotective activity in rats by inducing chronic liver damage by subcutaneous injection of 50% v/v carbon tetrachloride in liquid paraffin at dose of 3ml/kg, it is given in alternate days for 4 weeks. Stem bark extract dose given in 250 and 500mg/kg, all biochemical parameters like SGOP, SGPT, serum bilirubin and alkaline phosphate was evaluated and it is compared with standard silymarin.

Antitussive activity: (Ahmed et al., 2010) Methanol extract (200mg/kg) was compared with standard codeine phosphate (10mg) that is evaluated in sulfur dioxide gas-induced cough in mice. Maximum activity was seen at 90 min after administration of the bark extract, maximum inhibition is 56.9%.

Antiulcer activity: (Yadav et al., 2015)
50% of ethanolic extract of fruit used as antiulcer and reduce oxidative damage at mucosal lining of stomach. The studies are done on animal models of rats at dose 50, 100 and 200mg/kg, twice a day for 5 days. For evaluating the antiulcer activity the models are used like ethanol, pylorus ligation and cold strain-induced ulcer.

Anthelmintic activity: (Chandrashekhar et al., 2008)
Earthworms lost their activity when it comes in contact with ethanolic bark extract at 5, 10, and 50 mg/ml given dose-dependently. There is loss of mortality and cause death. The higher concentration of bark extract shows paralytic effect and death time is shorter and it is compared with standard piperazine citrate 3% within 90 min.

Antidiuretic activity: (Deep et al., 2013)
Decoction of Ficus racemosa bark given at dose at 250, 500 or 1000 mg/kg body weight it is given for 5 hrs at 1 hr of interval. It shows reduction in Na+ level and Na+/K+ ratio and increase urinary osmolarity.

Antidiarrheal activity: (Deep et al., 2013)
Ethanol extract of stem bark was stuied on different experimental models of diarrhea in rats. The inhibitory activity was observed against castor oil induced diarrhea, PGE2 induced enteropooling and charcoal meal tests this was done in rats. By using this extract on rats it shows antidiarrheal activity.

Chemo-preventive activity: (Ahmed et al., 2009)
The is treatment given orally to the rats by two methods, incidence tumors in ferric nitrilotriacetate (Fe-NTA)  it induced chemotoxicity in rats and potassium bromate- induced nephrotoxicityin in rats. Ficus racemosa extract (PM Paarakh, 2009) was given at 200 and 400mg/kg BW it results in decrease of xanthin oxidase, γ-glutamyl tranpeptidase, lipid peroxidation and H2O2. It also shows recovery in blood urea nitrogen, serum creatinine, renal OCD activity and DNA synthesis, by evaluating decrease in all this parameters it shows chemopreventive activity.

Anti-inflammatory activity: (Ahmed et al., 2010)
Petroleum ether of leaves shows anti-inflammatory activity against inflammation producing histamine and serotonin. It reduces edema induced by dextran and it is mediated histamine and serotonin. The ethanol extract of bark inhibits COX-1, 5LOX, phospholipase A2 and biosynthesis of PGE2. The petroleum ether of leaves at 200-400mg/kg bw it shows activity on carrageenan, serotonin, histamine and dextran-induced at rat hind limb paw edema. Maximum effect was shown at 400mg/kg in chronic test, when it was compared with phenylbutazone and non- steroidal anti-inflammatory agent (Mandal et al., 2000).

Memory enhancing activity: (Devansh et al., 2013)
It shows activity on Alzheimer disease which is caused by decrease in acetylcholine level and it is an extrapyramidal disease.

Hypolipidemic activity: (Deep et al., 2013)
Ethanolic extract of bark was given at dose 100-500mg/kg bw by inducing alloxan in diabetic rats. It shows hypolipidemic activity when compared with standard glibenclamide and it also shows hypocholesterolemic effect when rats were induced by dietary fibre content fruits in diet. The evaluation results shows increased in fecal extraction of cholesterol and bile acids.

Renal and testicular protective activity: (Yadav et al., 2015)
Acetone extract of bark was given at 250-500mg/kg it shows effect against doxorubicin induced renal and testicular toxicity. The extract was given at 500mg/kg it shows sperm count and spermatogenesis at higher level when it compared with normal control dose and antioxidant activity also observed at same dose.

Anti-filarial activity: (Mishra et al., 2005)
Alcoholic and aqueous extract of fruit shows inhibition of spontaneous motility of worm and nerve muscle of setaria cervi and increase in amplitude and due to concentration microfilarial causes death at 21 and 35 ng/ml for alcohol extract and 27 and 42 ng/ml at aqueous extract due too in vitro study at LC50 and LC90.

SIDE EFFECTS
1.  F. racemose is coolant tree, precaution is taken while using kapha dominant person with recurrent allergic rhinitis, cough & cold.
2.  Ripe fruit avoided in use of culinary it cause or worsen the intestinal worm infestation.
3.  Safety is taken during pregnancy.

SUMMARY
1. Overall study gives information about whole plant.
2. The different parts of plant i.e. fruit, leaves, stem bark is used on various diseases.
3. The medicinal plants are used traditionally form ancient time.
4. Due to use of Ayurvedic drug there is less toxicity in chemotherapy so, the people are moving towards traditional medicines.
5. The information in taken form many review articles and research paper it gives details about many uses.
6. The evaluation parameters are given for the determination of activity of the various extract.
7. By using various concentrations of leaves, bark stem, fruit, latex extract it shows antimicrobial activity.
8. The morphological studies & microscopically studies are done by comparing the leaves with monographs given in I.P. & B.P.
9. Overview on many papers it shows curing of many diseases.
10. Chemical constitutions studies are also done on different part of plants.
11. The side effect of F. racemosa is given, so that before using the extract the precaution can be taken.
12. Decoction of the leaves and bark is cost effect and shows treatment on many diseases.

CONCLUSION
Umber is use for public health because the studies proved the umber can be used in day to day life. The medicinal plants are widely used by medicinal practitioner for the treatment of the diseases. The extract of different part of plant like leaves, latex, fruits & bark shows pharmacological action. The important constituents are isolated from plant and it is responsible for curing the diseases like anti-diabetic, anti-diarrheal, anti-bacterial, anti-fungal, anti-ulcer, anti-wormicidal, anti-hypoglycemic, hypolipidemic, anti-diuretic and anti-inflammatory. It is popular indigenous system of medicines like Ayurveda, Siddha, Unani and Homeopathy. It takes vital place in traditional system. The study explores the potential of plant and signifies its importance in the pharmaceutical industries.  The plant is widely available all over the India. It has antibiotic and antibacterial properties due to this the formulation can be prepared like lotion and cream and has antioxidant property due to this it is helpful in chemoprotection and radioprotection. It is used in food preparation but the safety must be taken while giving in pregnancy.