ABSTRACT
Food adulteration and contamination are as old as the civilization itself. It is the consequence of the development of civilization, over utilization of nature, industrialization and in a price for the progression. It is highly prominent in Urban areas of Bangladesh. It is the consequence of commercialism of business people who are doing this knowingly to maximize profit. Higher degree of awareness shown by the people with higher educational background. Government regulatory agencies are less confident regarding food standard testing, as reported in the study. Educated people show higher degree of awareness of how the quality of food should be maintained. Regulatory authority is found to be in confidant in testing the food standard which also reflects their negligence. Safe food means, in general, there will be no danger from harmful elements that are deliberately added to food products in the country. The economic development of this country rarely reveals the basic literacy and consciousness of mass people. Necessary steps are to be taken to protect the environment for our own existence.

INTRODUCTION
Contamination is the presence of an unwanted substance where it should not be or at concentrations above recommended. Pollution is contamination that causes adverse biological effects to resident communities. Food contaminants and adulterants gave a new dimension in city life, together rest of the country. Rural people are less exposed to adulteration than urban people because of busy life, arrangement of food/spice item are mostly obtained from nearby grocery stores, chain shops and nearby open markets. Recent media reports on the misdeed in the food sector has revealed alarming scenario leading to massive public outcry. Although there is no official statistics regarding food borne illness, it is realized to be a major problem in urban areas of Bangladesh. Contaminated food, filthy and grimy environment of urban cities result in health hazard which may even cause deaths. The healthcare providers/policy makers’ role in environmental health is related primarily to being alert to the conditions prevailing in the community and of working with others to adequately control any of the attendant hazards.

Gross Outcomes of Chemical Contamination
Food remains a significant vehicle of disease organisms. Foodborne disease, more commonly but often incorrectly called “food poisoning,” is grossly underreported. In most instances the illness produced by contaminated food is mild and of short duration, but more severe outbreaks (such as hepatitis A, most commonly seen in public restaurants) can occur. Epidemics of food-borne disease are dramatic and sudden, and most people become sick within 6 to 24 hours after consuming the contaminated foodstuffs. The epidemic pattern of food-borne disease presents differently from the gastrointestinal symptoms (e.g., nausea, vomiting, and diarrhea) induced by intestinal enteroviruses. The safety laws and regulations of Bangladesh are as given in Table 1. WHO published – chemical exposure to toxic level is suspected to be involved in causing –
• Carcinoma
• Cardiovascular disease
• Kidney, liver dysfunction Hormonal Imbalance
• Premature birth
• Suppression of Immune system
• Impaired development of nervous system
• Mental health problems and
• Learning disabilities/Cognitive dysfunction

RESULTS AND DISCUSSIONS
Food adulteration is the most notorious enemy of mankind. Civilization has its own drawback that even causing destruction of itself. Very few people raised voice on this but crippled by the facts of commercialism. The scope of this article is confined to chemical food contaminants and adulterants. A few discussions based on real life experience and recent studies or reports from various journals and news articles are summarized here.

Food and Supply Water Contamination
Food and Supply Water Contamination Dhaka city, among huge amount of solid wastes every day from industrial discharge, fossil fuels, fertilizers, sewage sludge, municipality wastes and they are the major sources of heavy metals exposed to crops, vegetables and other food items from soils, causing serious health hazards to human beings (Hashem et.al., 2017; Mahmud, 2015 and Ashiqur, 2016). A significant deportation of heavy metals like arsenic, cadmium, chromium, copper, lead, mercury, nickel, zinc, molybdenum and vanadium took place from soils to locally grown vegetables (spinach, tomato and cauliflower) grown in industrially polluted soils of Konabari at Gazipur and Keraniganj in Dhaka (Rafiqul et.al., 2013). Due to absence of effluent treatment plants (ETP), the factory wastes are unloaded to farmlands, and conclusively contaminate the farm produce. In our country we have allowed things like food contamination and pollution to run riot. Till now, neither health ministry or the ministry of science and technology nor the ministry of industries, has conducted any examination of the pesticide- residue levels or toxic chemicals in the foodstuff being marketed (Asadullah, 2011). Apart from these, the slum areas are both populated and are in greatest risk of notorious pathogen found both in food sample and supplied water (Table 2). 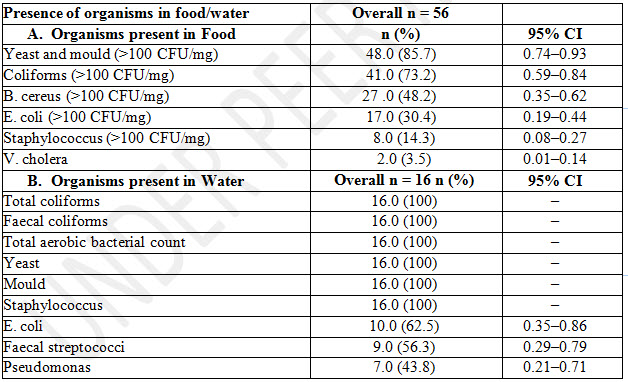 According to Dhaka Water Supply and Sewerage Authority (DWASA), it can currently supply 75% of water demand, out of which 85% is from groundwater sources (Deep Tube wells). The presence of toxic metals in Elephant road, Dhaka University, Jatrabari, and Demra area and toxic Pentachloro- Phenol (PCP) and existing pathogenic bacterial load in the WASA supplied drinking water sample from different areas of Dhaka city were found to be unacceptable for human consumption (Table 3). 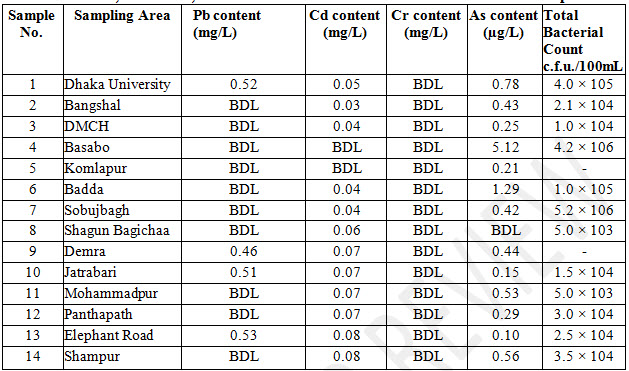 Arsenic Issue of Drinking Water
Twenty million people in Bangladesh are still drinking water contaminated with arsenic, a potentially deadly toxin discovered in supply two decades ago (Eresh, 2017). The Bangladesh government is failed to take initiatives to naturally occurring arsenic in drinking water across large areas of rural Bangladesh, as reported by Human Rights Watch. Approximately 20 years after initially coming to international attention, an estimated 20 million people in Bangladesh – mostly rural poor – still drink contaminated water over the national standard (Richard, 2017). Bangladesh’s health system largely neglects the consequence of arsenic exposure on public health. An estimated 43,000 people die every year from arsenic-related contagion in Bangladesh, according to another study (Hasin, 2016). The government identifies people with arsenic-related contagion primarily via skin abrasion, although the vast majority of those with arsenic-related illnesses don’t develop them. Those exposed are causative agent of cancer, CVD, and lung disease as a result, but many receive no health care at all (Human Rights Watch, 2016).

Food Adulterants
Important food hazards include microbial contamination, pesticide remainder, misused additives, chemical impurities, including biological toxins and adulteration. Although microbiological contamination and chemical hazards are taken into account, it is realized that food adulteration and fraud should not be overlooked considering their consequence in public health (FAO/WHO Expert Consultation, 1986). Food adulteration includes various forms of practices, such as mixing, altering, camouflaging the quality of food by mis-labelling, putting up decomposed or expired food, and adding toxic substances (Park, 2005). About the proportion of adulterated food items in the market varied between 70% to 90%. Around 80% food items in the market were found adulterated in an incidental survey by public health laboratory of Dhaka City Corporation in 2004 (Staff Correspondent, 2011 and Mirza et.al., 2014). International Centre for Diarrheal Disease & Research, Bangladesh (ICDDR, B), estimated 150 food items in the country. More than 50% of the food samples they tested were adulterated reported by the Institute of Public Health (IPH). Textile dyes, which are highly noxious to health, are being openly used as food coloring agent (OP-Ed, 2018). Clay powder is mixed with the mixture of turmeric powder and cold toxic yellow dye to make it yellow. Water and salt are well mixed with these species to increase the weight. Mangoes, watermelon, litchi, watermelon, pineapple, papaya and bananas are artificially ripened using a carcinogenic chemical called ethylene oxide (Table 4). In bananas, calcium carbide is used that becomes a spray Acetile-gas to generate heat. 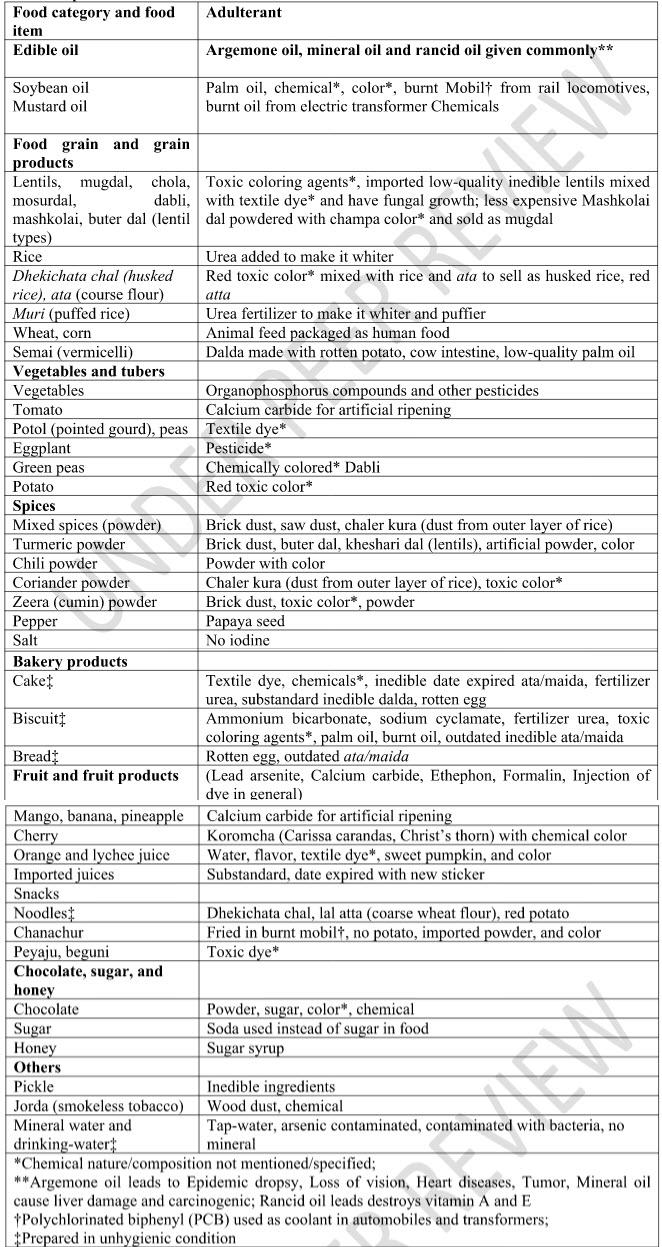 Dalda (hydrogenated vegetable oil/ fat popular in South Asia) used in cooking is an example of a worst case false. "Our stomach temperature is 37 degrees Celsius and the melting point is 54 degrees Celsius Dalda. So, there is no reason that Dalda can be engrossed by the body (Aasha, 2004). Most sweetened condensed deserts sold in the market actually comprises palm oil which is used as an alternative for cow’s milk and therefore most sweetened condensed milks out there do not contain milk at all (Qyshalini, 2017). Fish is considered to be an essential protein for people of all ages. Many fish sellers spray formalin in fish in an assorted manner, it makes the fish or fruits stiff and keeps them looking fresh for longer (Table 5). Undoubtedly human health is now under the domination of formalin, in our country about 400 tons formalin is being imported which are goes to human stomach, creates deadly mistreats on long term exposure (Table 6), even though for laboratory or research purposes 100 tons of Formalin is more than enough, 80% of the imported formalin is directly related to business purposes. Three-fourths of the marketed vegetables, fruits, and fish contain pesticides and formalin residues. The consumption of such foods might lead to serious diseases (Zubair, 2018). 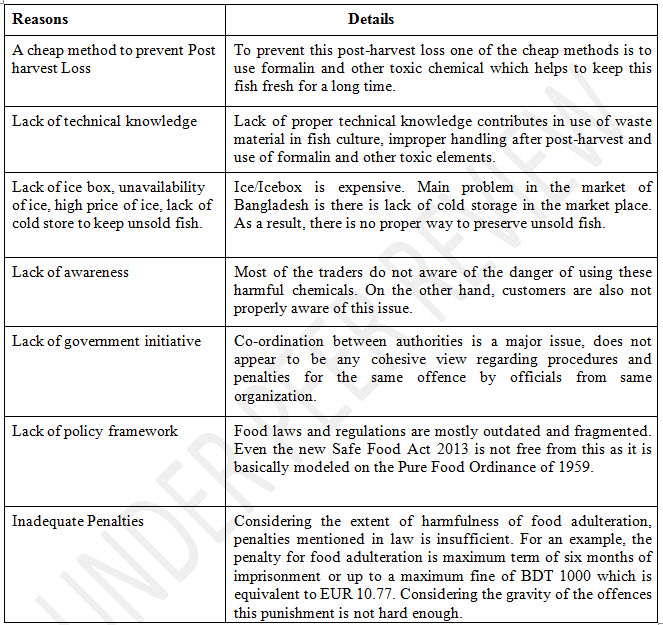