ABSTRACT
This article undertakes a review and assessment of regulatory framework in the Indian pharmaceutical industry. Understanding the regulatory circumstances in this segment is extremely critical. The Pharmaceutical industry is one of the major industries in India and it contributes a large share in the overall macro level growth of the India. It is one of the most dynamic sectors in the country but its compliance structure is more complex. The pharmaceutical industry has always been a buoyant sector in the eyes of Investors. With increasing returns, lower risks and high growth, investors are more interested in this industry than ever before.

INDIAN PHARMA INDUSTRY: ONE CLICK
Since 2000, the drugs and Pharma sector became the prime temptation for the foreign investors, (FDI) inflows of approximately $12,689 million (April 2000 to September 2014) [1] can prove the credibility of the above sentence. Earlier pharmaceutical industry was known for only or manufacturing generic drugs but presently the Indian Pharma industry evolved and showing its expertise in various activities including research and development (R&D), manufacturing of branded, generic and branded generic drugs, manufacturing APIs, laboratory testing and clinical research. The Indian Pharma industry ranks fourth in terms of volume and 13th in terms of value globally. [2]

Now India has become a prime goal for manufacture of branded, generic and branded generic medicines with strong export strength. It is estimated that around 40 per cent of the generic drugs in the US come from India and with Obamacare being introduced this figure is set to raise further. [3]

Expenditure structure of Indian pharmaceutical industry has also changed now companies are up to 18% of their revenue is spending on R&D [4].

REGULATORY STRUCTURE OF INDIAN PHARMACEUTICAL:
Here are following some regulatory bodies which are working as pillars to hold the regulatory infrastructure of pharmaceutical industry of India: 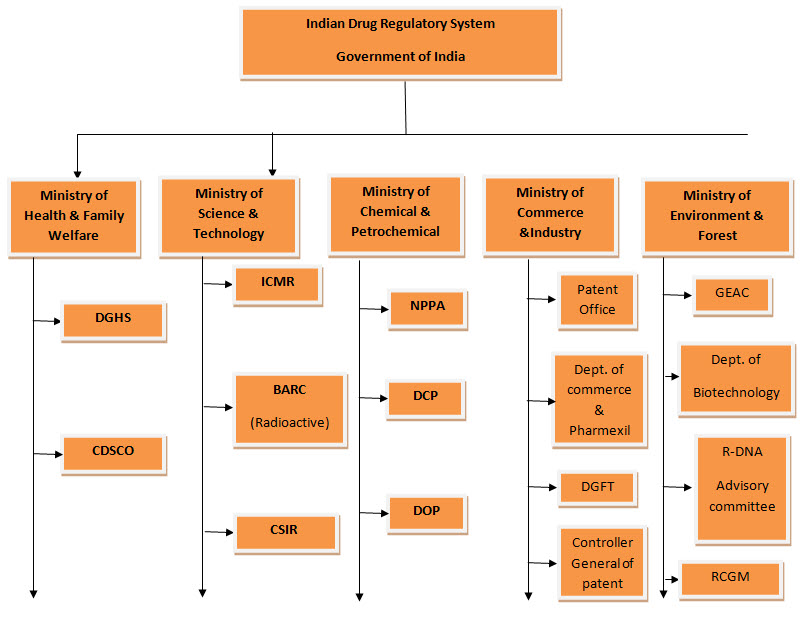 1. The Central Drug Standards and Control Organization (CDSCO):
CDSCO comes under the umbrella of the Ministry of Health and Family Welfare. The CDSCO prescribes standards and measures for ensuring the safety, efficacy and quality of drugs, cosmetics, diagnostics and devices in the country? Regulates the market authorization of new drugs and clinical trials standards? Supervises drug imports and approves licenses to manufacture the above mentioned products.

2. The National Pharmaceutical Pricing Authority (NPPA):
The National Pharmaceutical Pricing Authority (NPPA) is responsible for fixing the prices of bulk and formulation of drugs within the National List of Essential Medicines (NLEM). It is instituted in 1997 under the Department of Chemicals and Petrochemicals, which fixes or revises the prices of decontrolled bulk drugs and formulations at judicious intervals? Periodically updates the list under price control through inclusion and exclusion of drugs in accordance with established guidelines? Maintains data on production, exports and imports and market share of pharmaceutical firms? And enforces and monitors the availability of medicines in addition to imparting inputs to Parliament in issues pertaining to drug pricing.

8. DTAB (Drug Technical Advisory Board):
To advise Central & State Govt. on Technical Matters arising out of the Drugs & Cosmetics

10. DCC (Drug Consultative Committee):
It is an advisory Committee to DTAB and Central & State Govt. for uniform implementation of various provisions of the Act.

11. DOP (Department of Pharmaceutical):
It has formed in 2008 under the Ministry of Chemicals and Fertilisers. The MoHFW examines pharmaceutical issues within the larger context of public health while the focus of the DoP is on industrial policy.

In India, the drug manufacturers and exporters not only have to meet the standards set by the Drug Controller General of India (DCGI) but also standards benchmarked by the Drug Regulators of the countries to which the product is being exported. The regime of compliance is becoming stronger as regulators look for greater compliance from the industry given the mounting consumer pressures, and increasing healthcare standards. In addition, regulatory authorities are increasing the scrutiny related to patient safety and compliance.

12. CDA: (Central Drug Authority)
The CDA was established as an advisory body in terms of the Prevention of and Treatment for Substance Abuse Act (Act No. 70 of 2008) and is mandated to assist in the fight against substance abuse in the country. The primary function of the CDA is to monitor the implementation of the NDMP. The CDA ensures coordination, facilitates integration of the work of different departments and reports to parliament through the minister for social development.[6]

REGULATORY CHALLENGES FOR INDIAN PHARMACEUTICAL INDUSTRY
Drug Pricing:
Pricing policy and industry regulation are the part of one of the major responsibilities of NPPA. First time in India Price control on medicines was introduced in 1962 and has afterward persisted through the Drug Price Control Order (DPCO). Recently DPCO 2013 has entered, which includes-
The National Pharmaceutical Pricing Authority (NPPA) announced in July 2014 that it plans to add 50 drugs in the cardiovascular and anti-diabetic segment to the 348 drugs that were brought under price control following the implementation of the new Drug Price Control Order (DPCO) in July 2013.[7]

Drug Quality:
India is the biggest medicine supplier to the U.S. and it has about 200 U.S. Food and Drug Administration (FDA)-approved drug manufacturing facilities. India produces nearly 40 per cent of generic drugs and over-the-counter products and accounts for 10 per cent of finished dosages in the U.S.[8] US FDA has pointed out so many of quality issues and taken so many of actions against Indian pharmaceutical companies,[9] like restricting India’s shipments to the U.S. Based on these actions and quality concerns raised by other importers of Indian pharmaceutical products, the Indian government is working with the FDA to on these issues, as well as with the World Health Organization (WHO), and the Partnership for Safe Medicine (PSM) to put in place initiatives to combat counterfeit drug manufacturing. This contains equipping state drug testing laboratories, enforcing serialization, non-clonable packaging and 2-D barcoding, and investing in more drug manufacturer inspectors. [10]

Clinical trials:
In recent years, India has positioned itself as one of the major players in the clinical trials arena.
The recognition for India as a centre for clinical trials has mainly arisen through the providing of contract services to the international pharmaceutical industry in the form of clinical development services.

India’s clinical trials industry has seen substantial growth in the last decade due to its large pool of patients with diverse treatment needs and access to a large, scientifically skilled, workforce.[10] In India clinical trials has increased in numbers; the capacity to control trials has not kept pace in India which is resulting in some unethical practices.

The government of India has improved regulatory pedals like mandatory trial registration, and making committees to oversee trial approval, trial execution, and ethical treatment of patients. All of these measures have had a positive impact; however delays in drug approvals following thenew regulatory controls are prompting multinationals to rethink their strategy of conducting clinical trial activity in India. Even Indian pharmaceutical companies are now conducting some trials outside the country. [10]

Patent System of India:
To make Drugs affordable to all, the government of India is promoting the generics and ensuring that prices of lifesaving drugs are in the range of affordability to everyone. Because of this few pharmaceutical multinational companies have been intertwined in legal battles with the government on patent related issues, with lots of long-running court cases focusing on what is the definition of innovation according to the Indian Patent Act. [11]

Unmanaged regulatory system of Medical Devices:
Medical devices currently comes under the umbrella of India’s Drugs and Cosmetics Act and foreign direct investment (FDI) in the sector is regulated by the same rules as for pharmaceuticals, which is stunting green field medical device projects. The Indian government is actively considering a proposal to have a separate policy for Medical device manufacturers in India will be able to bring in foreign direct investment (FDI) up to 100% through the automatic route. [12]
Until now, the medical devices industry has been considered part of the overall pharmaceutical sector, where 100% FDI is allowed through the automatic route in new projects; however, existing companies can do so only with permission from the Foreign Investment Promotion Board (FIPB), in what is called the approval route. The RBI clarification essentially carves out the devices industry from the pharmaceutical sector for regulatory purposes and opens it for 100% FDI through the automatic route.Allowing 100% FDI in the medical devices sector is aimed at promoting local manufacturing of these products, as currently India meets at least 70% of its requirements through imports.

The main regulations related to medical professionals and pharma companies in India are as follows:
- Prevention of Corruption Act, 1988, applies to all of India and intends to curb bribery and corruption in the context of civil servants of the central and state governments.

- The Indian Medical Council (Professional Conduct, Etiquette and Ethics) Regulations 2002, (MCI Code) issued under the Medical Council of India Act, 1956 (including amendments) explains standards for the health profession in India. Amendment notification dated 10 December 2009, specifically prohibits medical practitioners and their professional associations from accepting any gift, travel facility, hospitality, cash or monetary grant from pharma and life sciences companies. In addition, the Central Board of Direct Taxes (CDBT) issued a circular in 2012 stating that it would disallow expenses incurred by pharma and life sciences sector businesses in providing freebies to medical professionals and treat the value of freebies enjoyed by the medical professionals and their professional associations as their taxable income.

CONCLUSION
India has an efficient pharmaceutical industry which has been making affordable drugs not just for the Indian market but has also been exporting them to the world. Addressing the above challenges in a holistic manner will strengthen the sector which constitutes a major part of the Indian economy. Pharma companies will have to devise suitable strategies to mitigate the risk emanating from the above discussed challenges for a sustainable and compliant growth over the next decade. Pharma companies need to focus their attention in working with the government and other stakeholders to discuss and resolve regulatory challenges.

They need to stalemate the issues with clinical trials will help companies continue with R&D which is base pillar to their growth strategies. The pharma and life sciences industry is one of the most heavily regulated in the world. Not surprisingly, the burden of successfully managing complex rules and regulations is a major issue facing by the pharma and life sciences companies worldwide. Company’s reputation can be on stake so they need to face these challenges. Now this is the time for Companies needed to take a 360-degree approach for their compliance programmes encapsulating not only compliance with regulatory requirements but also their internal ethical codes. A compliant pharma or life sciences company with a strong tone at the top will gain better competitive advantage in this competitive environment in the long run.