PHYTOSOMES IS A NOVEL DRUG DELIVERY SYSTEM BASED HERBAL FORMULATION: AN REVIEW

ABSTRACT Phytosomes is a novel drug delivery dosage form. Phytosomes is a patented technology. It is used for development of formulation for improved bioavability of medicaments of phytoconstituents present in herbal extract or herbal preparation. Phytosomes is prepared by using the phospholipids and forming the complex between phytoconstituent and phospholipids. Phytosomes now a day’s most valuable space in pharma-industries and good research space for industry scholar, students for future. The main object of this review giving various useful advantages of phytosomes and how it is prepare formulate. Phospholipids are employed as natural digestive aids and carriers for water soluble and lipid soluble nutrients.

INTRODUCTION:
Phytosomes is a novel approach of drug delivery system and it is advantageous in delivering the herbal drug at predetermined rate, delivery of drug at the site of action, Minimizes the toxic effects, Increase in bioavailability of drugs, Control of the distribution of drug is achieved by incorporate the drug in carrier system or in changing the structure of the drug at molecular level, Herbal drug are becoming more popular in the modern world for their applications and safety aspects. (Awasthi et al., 2011) Phytosomes is newly introduced patented technologies by Indian to developed and incorporate the standardized plant extracts. (Awasthi et al., 2011) The phytosomes process produces a little cell because of that the valuable components of the herbal extract are protected from destruction by digestive secretions and gut bacteria. Phytosomes are better able to transition from a hydrophilic environment into the lipid-friendly environment of the enterocyte cell membrane and from there into the cell finally reaching the blood. Phytosomes have improved pharmacokinetic and pharmacological parameter. Phytosomes are more bioavailability as compared to herbal extract owing to their enhanced capacity to cross the lipid rich biomembranes and finally reaching the blood. Phosphatidylcholine is phospholipids. It is a key component of phytosomes process. Phospholipids are employed as natural digestive aids and carriers for water soluble and lipid soluble nutrients. (Karimi et al., 2015) 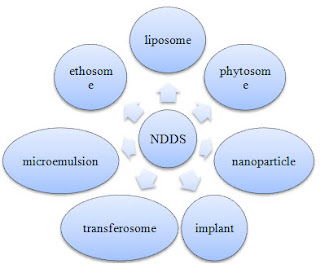 Antisolvent precipitation technique
The specific amount of drug and soya lecithin were taken into a 100 ml round bottom flask and refluxed with 20 ml of dichloromethane at a temperature not exceeding 60oC for 2 h. The mixture is concentrated to 5-10 ml. Hexane (20 ml) was added carefully with continuous stirring to get the precipitate which was filtered and collected and stored in vacuum desiccators overnight. The dried precipitate is crushed in mortar and sieved through #100 meshes. Powdered complex was placed in amber colored glass bottle and stored at room temperature. (Jan et al., 2013)

Rotary evaporation technique
The specific amount of drug and soya lecithin were dissolved in 30 ml of tetrahydrofuran in a rotary round bottom flask followed by stirring for 3 hours at a temperature not exceeding 40oC. (Awasthi et al., 2011) Thin film of the sample was obtained to which n-hexane was added and continuously stirred using a magnetic stirrer. The precipitate obtained was collected, placed in amber colored glass bottle and stored at room temperature. (Fei et al., 2016)

Solvent evaporation method
The specific amount of drug and soya lecithin were taken into a 100 ml round bottom flask and refluxed with 20 ml of acetone at a temperature 50 - 60oC for 2 h. The mixture is concentrated to 5-10 ml to obtain the precipitate which was filtered and collected. (Mazumder et al., 2016) The dried precipitate phytosomes complexes was placed in amber colored glass bottle and stored at room temperature. 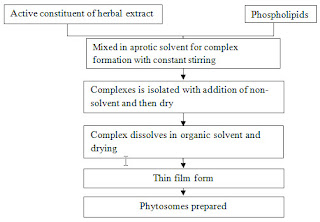 Advantages of phytosomes: (Raju et al., 2011)
1.They enhance the absorption of lipid insoluble polar botanical extract through oral as well as topical route showing better bioavailability, hence significantly greater therapeutic benefit.
2.As the absorption of active constituent(s) is improved, its small dose can produce desired results.
3.Phosphatidylcholine used in preparation of phytosomes, besides acting as a carrier also acts as a hepatoprotective, hence giving the synergistic effect when hepatoprotective substances are employed.
4.Phytosomes show better stability profile due to formation of chemical bonds between phosphatidylcholine molecule and botanical extract.
5.Phytosomes are better able to transition from a hydrophilic environment into the lipid‐friendly environment of the enterocyte cell membrane and from there into the cell, and thus can be used for systemic targeting.
6.Phytosomes are widely used in cosmetics due to there more skin penetration and have a high lipid profile.
7.By enhancing the solubility of bile to herbal constituent, phytosomes facilitates the liver targeting.

Advances in phytosomes technology used in cancer:
Clerodendron Paniculatum Linn Phytosomes were prepared by using the ethanolic roots extract of Clerodendron Paniculatum Linn. The extracts were vacuum dried and subjected to phytochemicals screening for the detection of various phytoconstituents .The formulated phytosomes from the extract exhibited potent activity against cancer cells such as MCF-7. From the in-vivo studies of phytosomes of Clerodendron Paniculatum Linn showed more anticancer activity than that of 5-fluorouracil. (Dhase et al., 2015) Aegle Marmelos Phytosomes were prepared by solvent evaporation methods in that leaves of Aegle Marmelos Phytosomes were extracted with pet ether and then with methanol by soxhlet extraction. Phytosomes batches (F1,F2, F3, F4, F5) were prepared by solvent evaporation method was used for preparation of phytosomes. F3 formulation selected as optimized formulation and further, evaluated it for particle size, digital microscopy, SEM, TEM, FTIR, DSC, XRD analysis. Comparative evaluation of antioxidant, antiproliferative and anticancer activity of extract and phytosomes was carried out. From above studies researcher concluded that phytosomes has better physical characteristics as compared to that of methanolic extract of leaves of Aegle Marmelos. Phytosomes has nearly same antioxidant, antiproliferative and anticancer activity as that of methanolic extract of leaves of Aegle Marmelos. Luteolin-loaded Phytosomes were prepared by using the solvent evaporation method. luteolin as a flavonoids compound and can inhibit Nrf2 and sensitize cancer cells to chemotherapeutic agents. (Dhase et al., 2015) The researchers reported that luteolin loaded in phytosomes as an advanced nanoparticles carrier sensitized MDA-MB 231 cells to doxorubicin. Researchers prepared nano phytosomes of luteolin to enhance the bioavailability of luteolin and improve passive targeting in breast cancer cells. In that results showed that co-treatment of cells with nanoparticles containing luteolin and doxorubicin resulted in the highest percentage cell death in MDA-MB 231cells. The lueolin loaded phytosomes technology can improve the efficacy of chemotherapy by overcoming resistance and enhancing permeability of cancer cells to chemical agents and may thus be considered as a potential delivery system to improve therapeutic protocols for cancer patients. (Dhase et al., 2015)

CONCLUSION:
Thorough study of literature different phytosomes products has demonstrated significant therapeutic effect when compared with the conventional plant extracts. The Phytosomes is novel dosage form and which is used for the preparations of final product like tablet, capsule, gel, suspensions. Phytosomes is used to increase the solubility as well as permeability of the phytoconstituents present in part of the plant.