ORAL DELIVERY OF INSULIN AND ITS CURRENT STATUS

Abstract
Insulin remains the most effective and durable hypoglycemic agent for the treatment of diabetes. Insulin is a major protein hormone secreted by beta –cells of the pancreas and is important for the control of diabetes. Insulin has an important place in drug therapies for insulin dependent diabetes mellitus (type I) and for many patients with non-insulin-dependent diabetes mellitus (type II). It would be highly advantageous if insulin could be administered orally, because the oral delivery of insulin can mimic the physiological fate of insulin and may provide better glucose homeostasis. The desire to deliver protein and peptide biopharmaceuticals conveniently and effectively has led to the intense investigation of targeted delivery systems. The goal of oral insulin delivery devices is to protect the sensitive drug from proteolytic degradation in the stomach and upper portion of the small intestine.

Introduction
Insulin is a hormone with intensive effects on both metabolism and several other body systems (eg; vascular compliance).  Insulin causes most of the body's cells to take up glucose from the blood (including liver, muscle and fat tissue cells), storing it as glycogen in the liver and muscle and stops use of fat as an energy source. When insulin is absent (or low), glucose is not taken up by most body cells and the body begins to use fat as an energy source (i.e. transfer of lipids from adipose tissue to the liver for mobilization as an energy source).  As its level is a central metabolic control mechanism, its status is also used as a control signal to other body systems (such as amino acid uptake by body cells). It has several other anabolic effects throughout the body. When control of insulin levels fails, diabetes mellitus results.(1,2)

Diabetes develops due to a diminished production of insulin (in type 1) or resistance to its effects (in type 2 and gestational). Both lead to hyperglycemia, which largely causes the acute signs of diabetes: excessive urine production, resulting compensatory thirst and increased fluid intake, blurred vision, unexplained weight loss, lethargy and changes in energy metabolism. Monogenic forms, e.g. MODY, constitute 1-5 % of all cases. Diabetes affects a large percentage of population around the world and has assumed epidemic dimensions.The current estimate of the number of diabetic patients in the world is 171.2 million (2.8%) in the year 2000 and   predicted to be 366.2 million (4.4%) by the year 2030.

Type 2 diabetes is the main type of diabetes mellitus rather typeI diabetic occurs 5-10% only.  The patients requiring insulin may have to take more than 60,000 injections throughout their life. Compliance is currently a major drawback in current diabetes delivery devices, with several patients suffering from Type 2 diabetes irregularly following or, in some cases, even discontinuing their insulin therapy due to pain or fear of injections.

At present, several methods of non-invasive insulin delivery, including oral, transdermal, nanotechnology based and gene therapy-based ones, are under research. Efforts are also on to develop a diabetes vaccine. One of the most promising modes of delivery under investigation is that of inhaled insulin .(3)

Structure of Insulin
Like most of the other hormones, insulin is a protein comprising of 2 polypeptide chains A (with 21 amino acid residues) and B (with 30 amino acid residues) [Fig. 1]. Chains A and B are linked by disulphide bridges. In addition A-chain contains an intra-chain disulphide bridge linking residue 6 and 11. The structure of insulin is shown in the fi gure 1 below. C-chain, which connects A and B chains is liberated along with insulin after breakdown of proinsulin. 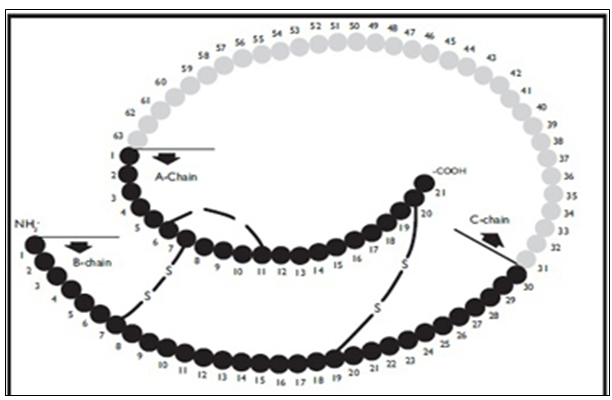