ABSTRACT:
With the spread of western lifestyles, the occurrence of diabetes in the world’s population is rising. Diabetes is a complex metabolic endocrine disorder that occurs when the pancreas does not produce enough insulin or when the body cannot effectively use the insulin it produces. It is classified into two basic forms Type I and Type II diabetes. A major goal for the treatment of type II diabetes is the enhancement of insulin secretion by pancreatic islet b-cells. The current therapeutic agents, although effective in increasing insulin secretion, are associated with undesirable side effects. Dipeptidyl peptidase IV (DPP IV) is responsible for conversion of glucose tolerance (GLP-1), into inactive form. The inhibition of DPP-IV would be beneficial in the treatment of diabetes mellitus. Improved glucose tolerance in diabetic patients was achieved with several small molecules as DPP IV inhibitors, including sitagliptin. The current study was designed to identify a suitable inhibitor agent for DPP IV. Computer-assisted molecular modeling approach has contributed to the successful discovery of several novel antidiabetic DPP IV agents.Someisoquinoline was designed computationally and screened through insilico docking studies against crystal structure of Dipeptidylpeptidase-IV (DPP-IV) ( PDB entry 2P8S )as a projected target for Type 2 Diabetes Mellitus.Insilico docking methodology using Auto Dock vina comprising a search method Genetic Lamarckian algorithm was used. Genetic Lamarckian algorithm performs an Automated Docking and has an advantage of empirical binding free energy force field that allows the prediction of binding free energies for docked ligands. In-silico evaluation shows satisfactory docking results, when compared with standard using docking. It is concluded that investigational ligands has the potential of inhibiting DPP-IV and there by further screening (invitro and invivo) studies can be carried out in order to find out optimized bioflavonoids for treating type2diabetes mellitus.

INTRODUCTION:
Diabetes Mellitus, better known as type II diabetes,is one of the most onerous chronic diseases and undoubtedly one of the most challenging health problems in the 21 century [1].It is the fourth or fifth leading cause of death in most high-income countries and there is substantial evidence that it is epidemic in many economically developing and newly industrialized countries [2].Diabetes mellitus is a syndrome of multiple aetiologies [3] characterized by chronic hyperglycaemia with impaired metabolism of glucose [4], lipids and proteins [5]. Juvenile or type I diabetes, occurs at a relatively young age where the beta cells of the pancreas do not produce enough insulin to maintain euglycemia in the plasma [6]. The hallmark of another type of adult onset or type II diabetes is the resistance of peripheral tissues to insulin action [7].

According to the international diabetic federation (IDF) 4.6 million people 20-79 years of age died from diabetes in 2011, accounting for 8.2% of global all-cause mortality of people in this age group. This estimated number of deaths is similar in magnitude to the combined deaths from several infectious diseases that are major public health priorities [8]. Looking at diabetes deaths against spending for diabetes care shows us the impact of a lack of treatment very starkly. The complications of type II diabetes and increasing pervasiveness emphasize the urgent need for new treatment strategies [9]

However, incretins have very short half-lives due to renal degradation and proteolytic cleavage by dipeptidyl peptidase. To extend the incretin effect on enhanced insulin secretion, two approaches can be taken, the intravenous administration of GLP-1 or the oral administration of DPP IV inhibitors to slow down the otherwise rapid inactivation of endogenous GIP and GLP-1 [20]. Compare to GLP-1 analogues, DPP IV inhibitors are orally bioavailable and cause temporary side effects. Over the past few decades, synthetic peptide-derived DPP IV inhibitors including Vildagliptin, Saxagliptin and Sitagliptin had been approved for management of type 2 diabetes mellitus in Western countries. DPP IV inhibitors seem to represent a resourceful new class of oral normoglycaemic agents, with a potential effect on pancreatic function, but the real efficacy and safety have to be firmly assessed in the future [21]. Rather the DPP IV inhibitors would fit into the typical algorithms for treatment of type 2 diabetes mellitus remains a matter for debate. 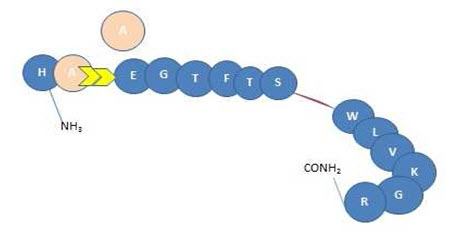 Time and cost required for designing a new drug are immeasurable and at an unacceptable level. Intervention of computers at some plausible steps is vital to bring down the cost and time required in the drug discovery process. The use of paired experimental and informatics techniques increases the chance of success in many stages of the discovery process, from the identification of novel targets and elucidation of their functions to the discovery and development of lead compounds with desired properties.

In Silico techniques save great amounts of time and money in R and D projects. It can help in identifying drug targets via bioinformatics tools. They can also be used to explore the target structures for possible active sites, generate candidate molecules, check for their drug likeness, dock these molecules with the target, rank them according to their binding affinities, further optimize the molecules to improve binding characteristics.

Protein Preparation: A typical PDB structure file consists of heavy atoms, water molecules, cofactors,metal ions and can be multimeric. The structure generally has no information on bond orders,topologies, or formal atomic charges. These structures do not have the information about bond orders,topologies or formal atomic charges. So, the raw PDB structure should be prepared in a suitable manner for docking.

Preparation of ligands
The ligands were designed using chemsketch and their 2d structure was converted to 3D structures using Chem3D ultra 6.1 and they were energy minimized using MM2.These energy optimized ligands were used for docking evaluation.Fig 2 shows the energy minimized ligands and Table 1 shows the ligands with molecular formula, molar mass, and number of torsions in the ligands.