ABSTRACT
Nitrosamines belongs to a family of potent carcinogenic substances that have been rigorously stidie dover the past decades due to its extreme carcinogenic nature to animals as well as humans. It is generally found as an industrial contaminant but can also the exposure to the substance maybe due to soil, water or food contamination. The carcinogenicity to humans is caused by the metabolised product of nitrosamines especially, N-nitroso compounds.

Under extensive researches in mice, in oral administration it is found to induce cancers of lung, kidney and stomach. It was proposed that the toxic nature of N-Nitroso dimethylamine is due to the highly – oxygen reactive species forming metabolite nature and also altering the activity of liver microsomal enzymes.

INTRODUCTION
N-nitroso dimethyl amine belongs to a family containing substances that are extremely potent and carcinogenic. They are known are N-nitroso amines. N-nitroso amines are formed by the reaction of organic nitrogen and a nitrosating compound like amides. They are generally formed by electrophilic reaction. These nitroso amines are generally found in water, soil, air (Hecht S.S., Hoffman D., 1988). Generally, nitroso amines are formed within the body due to the reaction between components that have entered into the body via various routes. The general structure of nitrosoamines as in figure, Where R1 and R2 are alkyl or aryl groups.

Description
Nitroso amines and their precursors generally enter into the body through food contamination or water pollutants or by direct soil contamination (Osterdahl B.G., 1990). A little portion of nitrates which are one of the precursors get converted into nitrites in the saliva. These react with other nitrogen compounds to form nitroso compounds. Most of the nitroso compounds are formed in the GIT are the main reason for human exposure. Formation of nitroso amines depend on several factors like pH, temperature. They are stable at bodily conditions (Hinuma K. et al., 1990). N-nitroso dimethyl amine (NDMA) is most commonly found substance of this family.

Properties
NDMA is a nitroso amine compound. It is a yellow, oily liquid with low viscosity and is volatile in nature. It is soluble in water, alcohol and other organic solvents. It is sensitive to light especially UV light. It readily undergoes photolytic degradation. NDMA is combustible and undergoes decomposition. When heated it releases oxides of nitrogen which are toxic in nature.

Sources
NDMA is mostly released via the industrial sources like tire manufacturing companies. NDMA is not much found in the direct atmosphere as it easily gets photolyzed during the day. There was a prevailing theory that NDMA is formed in air and gets mixed with water during the night time.

Atmosphere: very low percentage of exposure is observed in air. Generally, it is seen in tobacco smoke and industrial toxic gases.

Food and Soil: NDMA may enter into soil due to leaching into the soil. It also gets accumulated into fruits and vegetables due to excessive use of pesticides and herbicides.

Formation
NDMA is formed by nitrosation reaction. It is formed when nitrosyl cation or cation releasing agents such as di methyl nitrogen trioxide react with amines like dimethyl amine or trimethyl amine or compounds containing organic nitrogen. The reaction in laboratory conditions occurs at 3-3.5 pH. In the body, the acidic pH in stomach facilitates the formation of NDMA. Nucleophilic anions act as catalyst for the reaction to occur. As NMDA is also a nitrosoamine it has similar formation and biodegradation steps as nitrosoamines as whole. Organic nitrogen is derived from I, II, III amines, hydroxyl amines or peroxides of amines which are products resulting by transformation of fertilizers and herbicides containing phenoxy acetic derivatives.
A nitrosating agent, such as N2O3 can be formed from substances like:
1) Nitrites or III nitrates – NO2 –
2) Nitrates – NO3 –
3) Nitro compounds – NO2 –

For amines, the nitrsonium cation (NO2+) is obtained from nitrogen trioxide (nitrogen III oxide). The nitrogen III oxide attacks a pair of electrons on the nitrogen of the amine compound, having a nitrite anion and nitroso ammonium cation (Fig 2.a). The further reactions of the cation depend on its chemical structure and the properties of the nitrosocompound and reactions conditions. The nirosoammonium cations that are derived from primary amines undergo rearrangement by transferring two protons from amine nitrogen to oxygen (Fig. 2.b) and followed by elimination of water (Fig. 2.c.), thus producing a diazonium cation (Fig.2.d). Aliphatic diazo cations undergo elimination of nitrogen and reconstitution to appropriate carbonium ion (Fig. 2.e.) (Kupryszewski G., 1979; Przezdziecki Z, 1980). Disintegration of these compounds is highly exoenergic due to high energy bonds of N2. 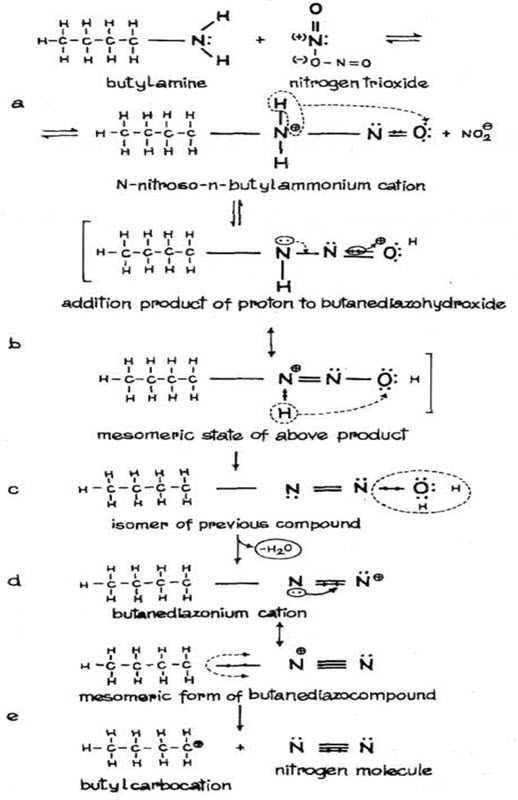 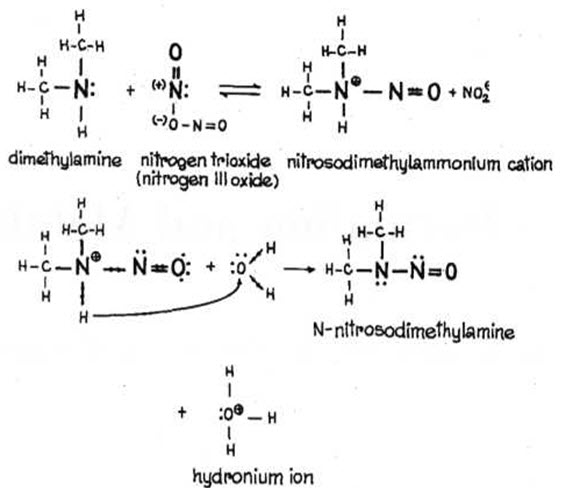 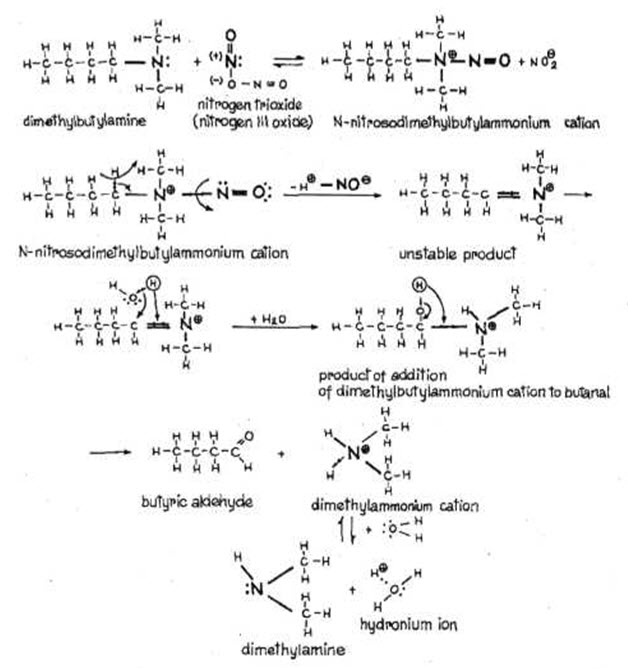 The process of formation of nitrosoamines can be studied in the nature itself. The formation of nitrosoamines can be observed in nitrogen-fixing bacteria. These bacterial biochemical processes perform nitrification and denitrification, thereby helping in formation of nitrosoamines. Some of these bacteria are: Arthrobacter, Mycobacterium, Pseudomonas, Bacillus, Streptomyces, Nocardia and some soil-grown fungi like Cephalosporium, Fusarium, Candida, Aspergillus and many more. It is believed that these microorganisms reduce nitrate to nitrite, transform proteins to secondary amines and create an appropriate environment that is slightly acidic ((Hecht S.S., Hoffman D., 1988). It is suggested that the interactions, that are hydrophobic in nature, between hydrocarbon radicals of the alkylamines with the lipid compounds of cell, present mainly in bacterial cell wall, increase the rate of formation of nitrosoamines, releasing a pair of electrons of amine nitrogen. The cationic bacterial wall surfaces attract nitrate anions and form suitable nitrosating agent at high concentrations in the presence of amines.

Biodegradation
Nitroso amines are comparatively stable under biological conditions, before being subjected to degradation to active derivatives (Huang Q. et al., 1987), these compounds reach liver via blood stream. In liver microsomes, certain enzymes are present that are present which are responsible for reactions of 1st and 2nd stages of biotransformation
During the metabolism of dialkyl nitroso amines, they undergo two stages of bio transformation
1. Dialkyl nitroso amines get converted to mono alkyl nitroso amines in the 1st phase. Here hydroxylation and dealkylation takes place.
2. During the 2nd phase they get degraded to other alkylating compounds like carbocations, diazo alkanes. This is done by specific enzymes, to transform into polar metabolites, which conjugate them with glucuronic acid or sulphuric acid or amino acids or glutathione molecules. (Tu Y.Y. et al.,1983)
The main purpose of both these of biotransformation reactions is to increase the solubility in water, which facilitates its excretion via urine from the organism. The enzymes of biotransformation of 1st and 2nd stages are not only found in liver but also in intestine, kidney, lungs, brain, skin and placenta (Hinuma K. et al., 1990; Przezdziecki Z, 1980). 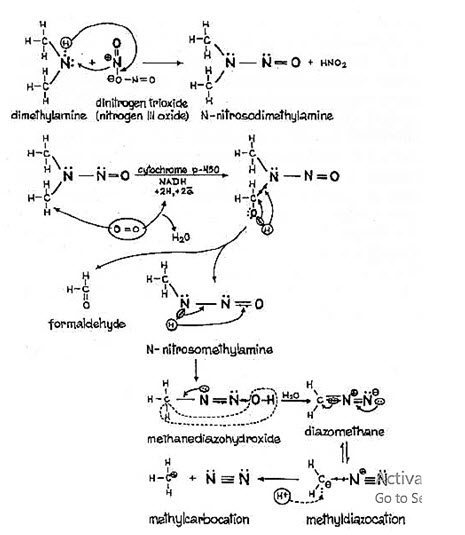 Mechanism of Action
NDMA is metabolized in the liver by CY2PE1 enzyme. It undergoes hydroxylation and forms formaldehyde and methyl diazonium ion. The formed methyl diazonium ion causes tumours in kidney, GIT as it gets excreted via urine and bile. Due to the favourable gut pH it also gets degraded into its respective toxic metabolites and can cause tumours.

Biotransformation reactions are catalysed by microsomal enzymes that depend on cytochrome P-450, which are a set of haemoproteins that catalyse the activation of molecular and its transfer to lipophilic molecule of the xenobiotic, the bio transforming agent.

The carbocation generated during the biotransformation of the metabolism of dialkylamines is very reactive and based on conditions it may form many components upon further reactions (Kupryszewski G., 1979).

Due to possible further reactions of carbocation, a relatively complex products can be obtained in the nitrosoamine metabolism. Some metabolites from 1st stage of metabolism may have a preserved nitroso group and get conjugated in second stage, ultimately get excreted in urine (Nikonorow M, Urbanek-Karlowska B., 1987). 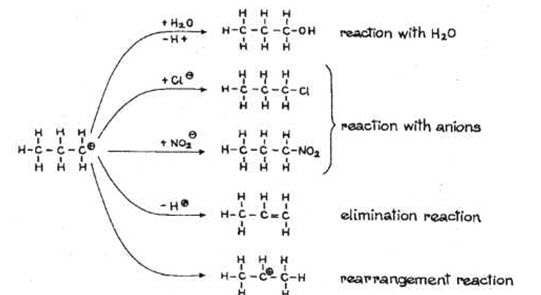 Pharmacokinetics
NDMA gets absorbed mostly via ingestion, and may be sometimes via inhalation or dermal absorption. it has wide distribution range in the body. It gets rapidly metabolized in the cells of liver and oesophagus. NDMA undergoes α-hydroxylation in the liver by CY2PE1 enzyme. It may also undergo denitrosation by forming certain intermediate radicals. But both these pathways have a common intermediate radical. α-hydroxylation involves formation of formaldehyde, methyl diazonium ion where as denitrosation forms methyl amines. Nitrosoamines are excreted in urine and maybe exhaled in air. Rest of them are degraded into carbon dioxide by active intermediates which have the carcinogenic property.

Carcinogenicity and Types of Cancers
NDMA is finally believed to be a human carcinogen by the results obtained in the extensive research on animals. It is known to cause kidney tumours in rats when they are exposed via inhalation or subcutaneous injection. NDMA could also cause stomach, oesophageal, colon and urinary bladder cancers. It was also found to induce liver toxicity and carcinogenicity. This proves that not only NDMA but also its metabolite is found to be highly dangerous to humans. It is known to cause haemorrhages, hepatotoxicity and various adenomas, carcinomas and sarcomas in the lung, liver, kidney and also haemangiomas in liver

Organ Specificity Of N-Nitroso Compounds
Sometimes, due to its high lipophilic nature, it can cause tumours by systemic manner tough there is very less evidence of formation of tumours in the nervous system. It is believed that and chemical nature of alkyl group seems to have a quantitative effect on formation of tumours. When compared to other parts these compounds tend to cause more tumours in the colon than that of duodenum, ileum, jejunum (Lijinsky W et al., 1987). A theory states that due to longer staying time of these metabolites and also presence of a stable environment for the metabolites to get absorbed in the colon region than that of other parts of the intestine due to its least water absorbability.

Treatment
NDMA is generally reduced by using UV radiation through drinking water. But this method has a drawback because it can alter the chemical composition of drinking water which can have other side effects. Use of ozone can be done be done or use of strong oxidants can significantly reduce NDMA levels.

CONCLUSION
There is a vast study of the family of these carcinogens to find out its effects and their mechanisms. Still, these substances are under investigation due to their organ specific carcinogenesis.