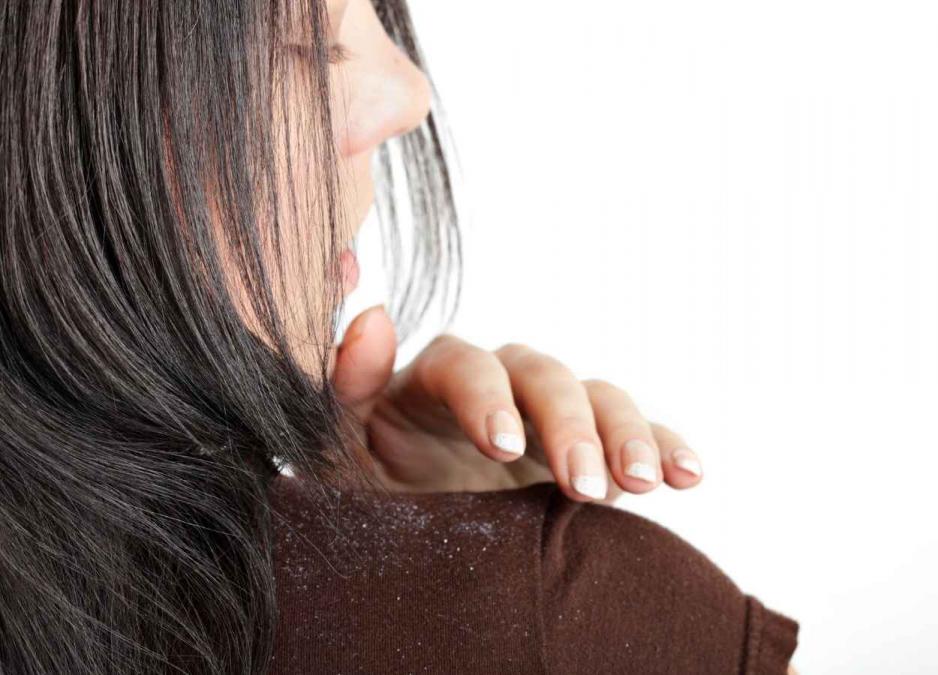 Abstract : One of the major health issues in todays scenario is skin diseases affecting people of all ages, i.e., neonates to old people. The most common skin disease in the scalp and other hairy areas is Dandruff. The word dandruff is of Anglo-Saxon origin, a combination of "tan" meaning "tetter" and "drof "meaning" dirty".It appears as white flakes that peel off from the scalp and gets spread in entire hairy regions. Natural medicines and herbal plants use, can help to resolve this issue with negligible or no side effects.

Aim and Objective : The aim & objective of this article is to review the effectiveness of herbal ingredients in anti-dandruff activity.

Introduction : Dandruff is a chronic scalp condition characterized by scaling, itching, and redness of the scalp. It occurs when the scalp sheds epidermal cells in large clumps. The skin of the scalp renews itself about once a month. Usually, the scalp sheds dead cells in a nearly invisible way, but sometimes cell turnover becomes unusually rapid, and dead cells are shed as visible flakes called dandruff. In light of recent developments in scientific and technological world, even today herbs are widely used as remedial agents. India is one of the countries in this artificial world which is rich in large varieties of medicinal plants. WHO currently encourages, recommends, and promotes traditional or herbal remedies in National health care programs because such drugs are easily available at low cost and comparatively safe and the people have good faith in such remedies. Dandruff is a common scalp disorder affecting almost half of the pubertal population of any ethnicity in both genders. Worldwide 55% of global population is suffering from the same problem. Dandruff is also called scurf historically termed pityriasis capitis it is due to the excessive shedding of dead skin cells from the scalp. As it is normal for skin cells to die and flake off, a small amount of flaking is normal and in fact quite common. Excessive flaking can also be a symptom of seborrheic dermatitis, psoriasis, fungal infection or excoriation associated with infestation of head lice. It sticks to the nails when the scalp is scratched. Other reasons of dandruff are excess androgenic hormone, excessive sebaceous secretion. Keratinization of the scalp tissue may be accelerated by physical irritation, such as scratching with the nails, chemical irritation from drugs, photosensitivity, tinea capitis, xerotic eczema and vitamin B or zinc deficiency or however the result of poor personal hygiene or use of dirty comb.

Hair Growth Cycle : As long as new hair cells continue to grow in the hair bulb, the hair continues to grow longer. This growth phase is also called the anagen phase. At any point in time, about 90 percent of a person’s total amount of hair is in this growth phase.

At the end of the growth phase, the hair root separates from the papilla. Then a transitional phase called the catagen phase starts, lasting about two to four weeks. When the hair has separated completely from the papilla, the supply of blood is cut off in the final resting phase, which is also called the telogen phase. The hair is gradually pushed out of the skin and eventually falls out. The resting phase can last several months. The hair cycle in human scalp is asynchronous mixture of the active hairs and resting hair. It is estimated that the scalp consists of “87-90%” of hairs in anagen, 1% in catagen and “10-13%” in telogen phase. It is important to understand the fact that normally we lose about 20-100 hairs every day. 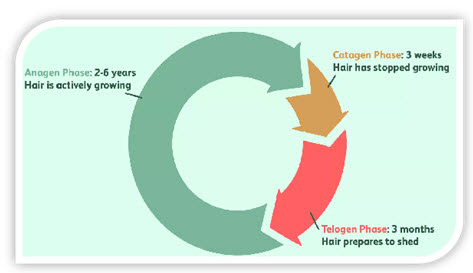 WHO criteria for pollution levels : WHO recommended highest PM should be 100 ng/m3 . The average particle matter (PM) in Mumbai varies from 238 ng/m3 to 643 ng/m3. Delhi levels of PM vary 398 ng/m3 to 760 ng/m3 , being highest during Diwali fireworks and winter smog. Rising levels of sulfur dioxide (SO2 ), nitrogen dioxide (NO2 ), ammonia (NH3 ) and other gases are between 11-48%, these can adhere to the hair shafts causing damage, the levels can be 3-5 times higher during winter smog and Diwali.

Impact of air pollution on hair :
Air pollutants (known as particulate matter, or PM for short) decreased the level of a specific protein in hair follicle cells. In other words, when hair follicle cells were exposed to common air pollutants their ability to produce new hair growth slowed and the more pollution they were exposed to, the more hair loss ensued.
That particulate matter, which is composed of the small particles and droplets in our air that we consider to be pollution can also build up on the scalp over time. If not properly sloughed off, and if the scalp does not receive proper protection afterward, then this buildup can contribute to significant hair follicle damage, lead to issues such as dandruff and irritation, and eventually even lead to hair loss. Air pollution doesn't just affect scalp only, but it can also build up on your actual hair, ultimately making it feel (and look) dirty, dull, and weighed down.

Classification of Dandruff : Depending upon the symptoms dandruff is classified into two main types
A. Dry dandruff.
B. Oily dandruff
A) Dry dandruff: It is also called as pityriasis simplex characterize by excessive formation of minute scales which accumulate on the scalp area. In this type of dandruff there is no excessive hair loss. The inflammation on the skin is not observed. The scales are first found in middle of the scalp and then spread to frontal, parietal and occupational areas.
B) Oily dandruff: It is also called as pityriadis steatoides. It arrives on the scalp with sebum production. It is mostly found in young men following puberty. Inflammation of varied intensity developed on the scalp along with oily scales of dirty yellow colour. Hair fall is most commonly found in this condition. The most common site affected by this type of dandruff is scalp, behind the ears, over breast and armpits.
Cause of Dandruff: The following conditions can cause both dandruff and hair loss:
• Fungal infections: Tinea capitis, or ringworm, can cause intense itching on the scalp. Some people also notice dry flakes or blisters, and the hair may fall out in clumps. Some other fungal infections can also cause dandruff symptoms and lead to hair loss. Antifungal treatments can help treat these conditions.
• Scalp psoriasis: Psoriasis is a type of autoimmune condition that can affect the scalp, causing itchy, scaly patches to develop. Although it is not dandruff, it causes dandruff-like symptoms. A person may notice bald spots where the scaly patches develop.
• Folliculitis decalvans: This rare inflammatory condition destroys hair follicles. It also causes itchy red patches to develop on the scalp. A person may think that they have dandruff because of the itching that this condition causes.
• Lichen planopilaris: More common in women, lichen planopilaris causes a dry, flaky rash to develop on the scalp. It can also cause the hair to fall out in clumps. Dandruff treatments will not treat this condition, but the symptoms are similar to those of dandruff.
• Seborrheic dermatitis: Seborrheic dermatitis can affect any part of the body. It commonly affects the scalp, where it may cause a red or grayish scaly rash that itches, as well as greasy patches. Left untreated, it may damage the hair follicles. Aggressively scratching the area may intensify the damage.

Synthetic antidandruff agents and their side effects :
In the current scenario many chemical substances are used for treating dandruff by controlling the abundance of fungi on the scalp. The main active agents used currently for controlling dandruff include imidazole derivative such as ketoconazole and other compounds such as selenium sulfide, zinc pyrithione, ethylene glycol, piroctone, olamine, salicylic acid, guar hydroxy propyltrimonium chloride, dimethiconol, glycolic acid, steroids, tar derivatives. Most products which are designed to fight dandruff contain zinc pyrithione. Zinc pyrithione has antifungal effect; it has the ability to disrupt membrane transport by blocking the proton pump that energizes the transport mechanism. Ketoconazole and Zinc pyrithione (ZnPTO) based shampoos (OTC products) are used more by the consumers for common dandruff problems. The shampoos with ZnPTO are preferred by majority of the consumers, as the shampoos brands with ZnPTO (Anti Dandruff ingredient) are not only cheaper but also provide the desired functional benefit. However, in very severe cases of dandruff, ketoconazole based shampoos are preferred despite their relatively higher costs. A number of topical corticosteroids are used for the treatment, but corticosteroids as creams and ointments may have some undesirable effects. Some of the very common side effects associated with antidandruff shampoos are itching, mild irritation or oiliness and dryness of hair and scalp. Severe allergic reactions includes rash, hives, itching, difficulty in breathing, tightness in chest, swelling of mouth, face, lips, increased or abnormal hair loss, blistering, peeling or burning of skin or scalp.

Herbs as anti-dandruff agent :
Dandruff is an overall scalp disorder/disease. The treatment of dandruff includes application of topical, antifungal or other products. Since recurrence occurs commonly prophylaxis using products for skin and hair to maintain good healthy skin of scalp and hairs. Herbs are compatible with both human skin and hair. Unlike chemical based products, herbs are completely safe, extremely effective and have almost no side effects due to their compatibility with human body. Herbal drugs or their formulations are viable alternative to synthetic drugs. The awareness and need for cosmetics with herbs is on the rise, primarily because it is believed that these products are safe and free from side effects.

CONCLUSION
Natural Herbs are compatible with both human skin and hair. Unlike chemical based products herbs are completely safe, extremely effective and have almost no negative side effects due to their compatibility with human body, cost effectiveness, their demand is increasing day by day. This also promotes research for newer plant constituents. The synthetic treatments available have certain limitations, which may be due to poor efficacies or due to compliance issues; furthermore, these synthetic drugs are unable to prevent recurrence, the common problem associated with them. In this article, our main aim to review the effectiveness of Natural herbs compared to that of synthetic formulations as an anti-dandruff activity.