INTRODUCTION:
An investigation of reactive oxygen species (ROS), play a critical role in the development of oxidative stress that can cause to many disorders including cardiovascular diseases, diabetes, inflammation, degenerative diseases, cancer, anemia, and ischemia etc (.Cai Y, et al., 2004). A free radical is a compound with more than one unpaired electrons in its outer most orbital. These unpaired free electrons species are unstable, suddenly reactive with other molecules due to the presence of unpaired electron species (Karlsson J, 1997). Therefore, they try to pair their electron(s) and generate a more stable compound.

The most harmful free radicals include atomic and molecular varieties of oxygen, known as Reactive Oxygen Species (ROS). ROS are emerged continuously in the body by both endogenous and exogenous factors like aerobic respirations, macrophages, polymorphic nuclear leukocytes and exposure to environment pollutants like organic solvents, pesticides, ionizing agent, tobacco smoke (Yeera R, et al., 2005) and (Beris H, 1991). Now a days ROS related to lipid peroxidation has been considered as one of the main causes of these diseases (Widodo N, et al., 2010).To prevent the cells against oxidative damage by free radicals, an antioxidant system, including superoxide dismutase (SOD), catalase, glutathione peroxidase, and glutathione reductase enzymes has evolved in aerobic organisms (Dickinson DA, 1991) and (Kurata M, et al. p. 1993).Under conditions of elevated ROS production or when the antioxidant system is compromised, cells are unable to scavenge the free radicals efficiently, leading to ROS accumulation. It has been demonstrated that many naturally occurring compounds possess notable activity as radical scavengers and lipid peroxidation inhibitors (Wagner, 1994). In addition to plant extracts, numerous naturally occurring compounds are useful as antioxidants, ranging from a vitamin A and E to plant antioxidants such as phenolic compounds, alkaloids, and organic sulfur compounds (SA, et al., 2006).

A large number of experiments have been carried out concerning the antioxidant activity of several plant extracts. The results of these experiments reveal that the activity is due to several secondary metabolites especially phenolic and flavonoids compounds. Melia azedarach commonly known as turaka vepa, belongs to the family of Meliaceae is widely distributed in  Persia, India sub-continent and China, that is now naturalized in a  number of continents including Africa, south-eastern Asia and large parts of northern and eastern Australia (Deepika Sharma, 2013) and (Porcher, et al.). The plant is traditionally used for the treatment of leprosy, inflammations, and cardiac disorders. Its fruits extracts possess ovicidal (Corpinella MC, 2007) and larvicidal activity (Wandscheer CB, 2004). The leaf extracts also possess antiviral (Descalzo AM, 1989). and antifertility activity (D.N, et al., 1990).To date, however, there has been little rigorous scientific study of this traditional medicine and indigenous plant and there is no scientific information on antioxidant properties of this leaves on different extracts of this plant. Thus, we evaluated the abilities of leaf extracts of Melia azedarach L. with different polarity solvents to function as an antioxidant agent by using vitro tests.

Preparation of crude drug for extraction
An authenticated of fresh leaves and tigs samples of plant M. azedarach L was collected at kancharapalem gov.t poly technical college opposite to high way road surrounding area, Vishakhapatnam district, Andhra Pradesh  and washed individually under running tap water to remove any traces of soil particles and other dirt. The leaf was dried under shade at room temperature. Then macerated to coarse powder with a mechanical grinder and used to extract preparation. Passed through sieve. The powder was stored in an airtight container for further use.

Method of extraction
Macerate 1kg coarse powder leaves and for 48 hours with solvents (n-Hexane, chloroform and methanol) then reflux it for 1 hours at low temperature after that crude concentrate menstrum was separate it. Then filter, obtained menstrum subjected to rota vapour to get thick paste and recover the solvent again used to imbibition of coarse powder leaves. This procedure is carried for thrice. After that coarse powder leaves allowed to dry it successfully and then process same for remaining two solvents to macerate.

DPPH radical scavenging assay
The ability of three different MALoHE, MALoCE and MALoME to scavenge DPPH radicals was measured according to the method (Maxwell Afari Gyamfi, 1998) as previously described (Francis M., 2010). A solution of 0.3% DPPH was prepared in methanol and extract/fractions with different concentrations were mixed with 3 mL of DPPH solution. The changes in absorbance were measured after 30 minutes at 517 nm and the half maximal inhibitory concentration (IC50) value was calculated from the percentage inhibition values was calculate by comparing the absorbance values of the control and test samples using following equation:
S% = [(Acontrol – Asample) /Acontrol]×100
Where,
Acontrol = absorbance of the blank control (containing all reagents except the extract solution) Asample =absorbance of the test sample

Nitric oxide scavenging activity assay
Nitric oxide scavenging activity can be estimated by the use of Griess IlIosvoy reaction (rozina parual, 2016).The compound sodium nitroprusside is known to decompose in aqueous solution at physiological pH 7.2 producing NO¬. Under aerobic conditions, NO¬ reacts with oxygen to produce stable products (nitrate and nitrite). The quantities of which can be determined using Griess reagent. Scavengers of nitric oxide compete with oxygen leading to reduced production of nitrite ions. For the experiment, sodium nitroprusside (10mM) in phosphate buffered saline was mixed with different concentrations (10, 20, 30, 40, 50µg/ml) of MAHLE, MACLE, MAMLE of each plant were dissolved in methanol and incubated at 30ºC for 2 hours. The same reaction mixture without the extracts served as the control. After the incubation period, 0.5 ml of Griess reagent (1% sulfanilamide, 2% H3P04 and 0.1% N-(1-naphthyl) ethylenediamine dihydrochloride) was added. The absorbance of the chromophore that formed during diazotization of the nitrite with sulfanilamide and subsequent coupling with Naphthylethylenediamine dihydrochloride was immediately read at 550nm. Inhibition of nitrite formation by the gradient polar solvent extracts of the same plant and the standard antioxidant ascorbic acid were calculated relative to the control (Stanley mukangayama, 2014).

Hydrogen peroxide scavenging assay:
Principle:
Hydrogen peroxide is a weak oxidizing agent and can inactivate a few enzymes directly, usually by oxidation of essential thiol (-SH) groups. Hydrogen peroxide can cross cell membranes rapidly, once inside the cell, H2O2 Can probably react with Fe2+, and possibly Cu2+ ions to form hydroxyl radical and this may be the origin of many of its toxic effects. It is therefore biologically advantageous for cells to control the amount of hydrogen peroxide that is allowed to accumulate (Nagulendran, et al., 2017).

Method:
Scavenging activity of Hydrogen peroxide (H2O2) by the plant extract was determined by the method. Plant of different solvent extract (4 ml) prepared in distilled water at various concentration was mixed with 0.6 ml of 4 mM H2O2 solution prepared in phosphate buffer (0.1 M pH 7.4) and incubated for 10 min. The absorbance of the solution was taken at 230 nm. Ascorbic acid was used as a positive control compound. The percentage of inhibition was calculated by comparing the absorbance values of the control and test samples by above equation (Ruch R.J, 1989).

Table: 1 Results of Qualitative Phytochemical Screening of chloroform , hexane and Methanolic extracts of the leaves of Melia azedarach 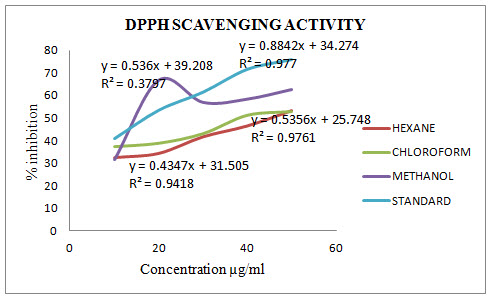 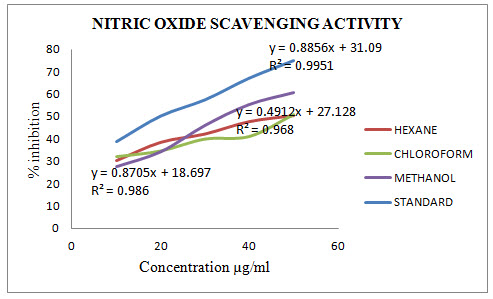 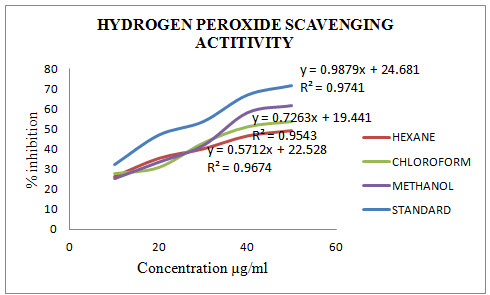 DISCUSSION AND CONCLUSION
Polyphenolic compounds are present in three different MALoHE, MALoCE and MALoME. It is well known that flavonoids and polyphenols are natural antioxidants but have  also  been  reported  to  significantly  increase  SOD, glutathione  and  catalase  activities.  Furthermore it was shown that these compounds act as promoters for SOD, catalase and glutathione and cause the expression of SOD, glutathione.

The scavenger assay of the MALoHE, MALoCE and MALoME suggested that it has the potential to reduce the ferric form. The absorbance value was found to be increased with increase in concentration of the extract and potent activity for methanol extract and chloroform extract.The further study on this plant might provide the isolation of some active constituents enduring the antioxidant potential.