ABSTRACT
Modern era diseases bring more challenges and hurdles to the rational drug targeting. However chemotherapy is the most affected area as most reports are related to antibiotics resistance. Although some successes are accounted as new molecules and new structures are keep on synthesizing or either isolated. One such example is Teixobactin which is isolated for Eleftheria terrae, which was found to be active against Staphylococcus and Mycobacterium bacteria. The story of Teixobactin isolation could open new horizon and opportunistic ways for future designing of useful drugs against these resistance bacteria. In the similar context we tried to compile the relevant paper that was published in nature in 2015 into a commentary based critical review.

INTRODUCTION
Human genome is recently sequenced and was supposed to open the new ways for combating threatening diseases. Although it was found very disappointing as only 2 percent genes coded the proteins and remaining 98 percent were “junk”.[1] However recent developments and discoveries in target specific biology (say e.g. protein tyrosine phosphatase in cancer [2]), genetic techniques [3], discoveries of newer scaffolds and molecular structures which could either derived from natural sources or synthetic routes [4-6], somehow boosted the the rational drug designing and targeting. While present therapeutics are facing more severe challenges from higher rates of resistance, toxicity, selectivity issues and lack of proper biology in relation to host-parasite interactions.[7] Also the occurrence of more antibiotic resistant bacterial species added the list of hurdlesto the present chemotherapy. Recent population based studies predicted higher rates of morbidity and mortality in all over the world because of increased number of these infections resistance infections.[8-12] Moreover these studies also highlights the certain shortcomings which include lack of adequate number of drug discoveries projects, funds allocated to these projects and uncontrolled selling of antibiotics in developing countries, which is found to be topmost critical reason for the antibiotic resistance.[13]

In the beginning of 2015, Ling et al., disclosed their research outcome in nature, where they isolated a peptidic structure molecule from a bacteria called as “Eleftheria terrae”, see in Figure 2, which was further found to be active against the Staphylococcus aureus and Mycobacterium tuberculosis without the bacteria developing resistance. [14]

The molecule isolated was later named as, “Teixobactin” and also classified as a new class of antibiotic which binds to the lipid II and lipid III. These lipids are crucial precursor for production of the peptidoglycan layer in cell wall formation. While Teixobactin binding to these lipids makes them unavailable for cell wall formation, leading to bacterial cytosol lysis.[14] Although Vancomycin also has similar mechanism of binding, but only binds to lipid II.

ADOPTED ISOLATION METHODOLOGY
The adopted technique was designed by Kim Lewis and Slava Epstein at Northeastern University in Boston, which included an assembly of basic culturing instruments, together called as ‘iChip’ (see figure 1 which is Schematic of iChip technology – courtesy Slava Epstein, Northwestern University, source- forbes home page). This technique assisted the culturing and isolation of Teixobactin from as previously uncultured bacteria named as Eleftheria terrae. 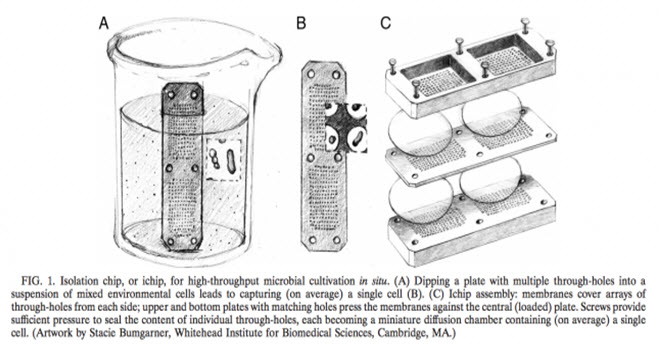 Basically iChip is akind of diffusion chamber consisting hundreds of hole in which soil sample is diluted and then placed on this iChip. Because of the dilution, it is presumed that only one microbe would hold in one hole. The soil is then sandwiched between two semi permeable membranes and placed back to the soil. This membrane allows required nutrients, growth factors and other essentialities to diffuse through these pores and provide a sustainable ambient environment for these bacteria, present in the holes for growth and multiplication.

From the 3/4 of the ichip, bacteria can then be transferred to laboratory culture. Also, this was found to be a comparably improved method than the conventional lab culturing ones as they has less success rate i.e. only 1%. However the mechanism of this technique which assists the bacteria growth remains unclear, but provides betterment in the development of novel antibiotics. Furthermore the transferred bacteria then allowed to grow in ambient laboratory conditions and thereafter specific biochemical methods employed to isolated their products. Later on the products are further purified for removing the impurities and artifacts

Also further investigations showed that the Teixobactin killed the Staphylococcus aureus or Mycobacterium tuberculosis without the bacteria developing resistance. Also found potent against all tested gram-positive bacteria, including drug resistant enterococci, with Clostridium difficile and Bacillus anthracis. Surprising in-vitro antimicrobials activites, found parallel with in-vivo, on mice model infected with methicillin-resistant S. aureus (MRSA), and Streptococcus pneumoniae. However it is inactive against the bacteria with an outer membrane such as gram negative pathogens, particularly carbapenem resistant enterobacteriaceae, or those with New Delhi metallo-beta-lactamase 1 (NDM1).

The study also revealed that Teixobactin effective to gram positive bacteria or scientifically which have thick cell wall but lacks an outer membrane and therefore could be new level of targeting the disease like diphtheria and tetanus (see in Figure 3). 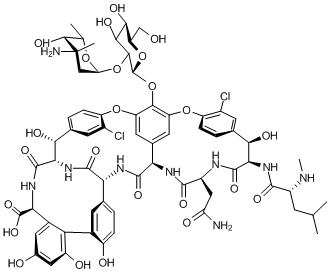 Fig.3.(adopted from ling et al, Nature, 2015): Mode of action of Teixobactin & structure of similar profile drug (Vancomycin). Peptidoglycan layer is required for cell wall synthesis. Moreover the Lipid II, a precursor of peptidoglycan, is synthesized in the cytoplasm and then MurJ[15] or either FtsW[16] flipped it to the surface of the inner membrane. However Lipid III, a precursor of wall teichoic acid (WTA), is formed in a similar way and further translocated across the cytoplasmic membrane by the ABC-transporter TarGH[16]. A stoichiometric complex of Teixobactin (TEIX) with cell wall precursors (lipid II and lipid III; see in figure 4) was later formed. Inhibition of these building blocks simultaneously interrupts the biosynthesis of peptidoglycan and WTA as well as precursor recycling. Also these binding obstruct the formation of a functional cell envelope. CM, cytoplasmic membrane; CW, cell wall; OM, outer membrane; LTA, lipoteichoic acid; WTA, wall teichoic acid.[14] 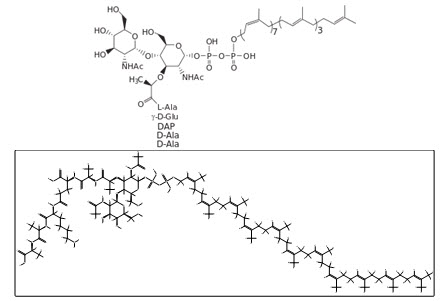 STRUCTURE BASED STUDIES
Its absolute stereochemistry was determined by employing various techniques that included chemical degradation with advanced Marfey’s analysis as well as partial degradation, synthesis of fragments obtained by degradation and the synthesis of all four diastereomers of an unusual amino acid not occurring in proteins.[7]

· Teixobactin is an 11-residue, macrocyclic depsipeptide isolated from E. terrae
· Biochemical enzymatic product of nonribosomal peptide synthetases Txo1 and Txo2 (encoded by the genes txo1 and txo2).
· Structurally it possesses 4 D-amino acids, a methylated phenylalanine, and the non-proteinogenic amino acid enduracididine.
· Total 11 modules/steps were used, where each module contains sequentially addition of one amino acid to a growing peptide chain. The initially module was methylation of N-terminal of phenylalanine by methyltransferase. However the final step accommodates the ring closure between threonine and the end amino acid, isoleucine is catalyzed by two C-terminal thioesterase domains of Txo2, forming a lactone.

FUTURE PERSPECTIVE
Teixobactin becomes a novel category molecule which selectively kills the gram positive bacteria. Its mechanism of action could help in the development of future drug targeting. The technique that was used to isolate the Teixobactin can be further used to isolate more bioactive molecules from other bacteria cultures.

Acknowledgement: This paper focused on the recent finding of the ling et al. research work which was published in nature in the beginning of 2015. Also we dedicated our paper as complimentary based critical overview of that paper.