Merrifield solid phase peptide synthesis:
Merrifield developed a series of chemical reactions that can be used to synthesize proteins. The direction of synthesis is opposite to that used in the cell. The intended carboxyl terminal amino acid is anchored to a solid support. Then, the next amino acid is coupled to the first one. In order to prevent further chain growth at this point, the amino acid, which is added, has its amino group blocked. After the coupling step, the block is removed from the primary amino group and the coupling reaction is repeated with the next amino acid. The process continues until the peptide or protein is completed. Then, the molecule is cleaved from the solid support and any groups protecting amino acid side chains are removed. Finally, the peptide or protein is purified to remove partial products and products containing errors.

Advantages of solid phase synthesis
(1) Since, the reaction is carried out on a solid support such as resin beads, a range of different starting materials are available that can be bound to separate resin beads, which are mixed together, such that all the starting material can be treated with another reagent in a single experiment. Therefore, it is possible to do multi-step synthesis and mix-and-split synthesis (a technique used to make very large libraries)
(2) Since, the products are bound to solid support, excess reagents or by-products can be easily removed by washing with appropriate solvent. Hence, large excesses of reagents can be used to drive reactions to completion.
(3) Intermediates in a reaction sequences are bound to the bead and need not be purified.
(4) Individual beads can be separated at the end of reaction to get individual products.
(5) The polymeric support can be regenerated and can be reutilized if appropriate cleavage conditions and suitable anchor/linker group are chosen.  [Pandeya S.N. and Thakkar D. (2004)]16
(6) Because of easy separation of reagents and products, solid-phase chemistry can be automated more easily than solution chemistry. Separation of compounds bound to the solid support from those in solution is accomplished by simple filtration.
(7) Improved reaction yield.  [Mishra A.K. et al. (2010)]15


Disadvantages of solid phase synthesis
(1) Optimal reaction conditions for solid phase synthesis can be difficult to determine, and developing these are far more time consuming than the actual reactions will be.
(2) There is limited the range of chemistry available for attachment to the resins in solid phase. ie. Some molecules don’t attach well to beads.
(3) It is difficult to monitor the progress of reaction when the substrate and product are attached to the solid phase.
(4) Assessment of the purity of the resin attached intermediates is also difficult.
(5) Purifying the final product after cleavage from the resin also proves to be a challenge. Removal of product from bead can be damaging to product if not careful. [Leard L. & Hendry A. (2007)]13

Solid support used in Solid phase synthesis
Most solid state combinatorial chemistry is conducted by using polymer beads ranging from 10 to 750 µm in diameter. The solid support must have the following characteristics for an efficient solid-phase synthesis:
1) Physical stability and of the right dimensions to allow for liquid handling and filtration;
2) Chemical inertness to all reagents involved in the synthesis;
3) An ability to swell while under reaction conditions to allow permeation of solvents and reagents to the reactive sites within the resin;
4) Derivatization with functional groups to allow for the covalent attachment of an appropriate linker or first monomeric unit. [Mishra A.K. et al. (2010)]15 The solid supports are usually composed of two parts: the core and the linker. The starting  Compound of the synthesis is attached to the support via the linker.

The core ensures the insolubility of the support determines the swelling properties, while the linker provides the functional group for attachment of the start compound and determines the reaction conditions for the cleavage of the product. The linker itself and the covalent bond formed with the start compound must be stable under the reaction conditions of the synthesis. [Furka A. (2007)]5

Types of solid phase  used:
* Polystyrene resins: In this, Polystyrene is cross linked with divinyl benzene (about 1% cross linking). Polystyrene resin is suitable for non-polar solvents.
* Tenta Gel resins: It consists of about 80% polyethylene glycol (PEG) grafted to cross-linked polystyrene1.It Combines the benefit of the soluble polyethylene glycol support with the insolubility & handling characteristics of the polystyrene bead. PEG containing resins are suitable for use in polar solvents.
* Poly acrylamide resins: Like super blue these resin swell better in polar solvent, since the contain amide bonds, more closely resemble biological materials.
* Glass and ceramic beads: These type of solid supports are used when high temperature and high pressure reaction are carried out.
[Mishra A.K. et al. (2010)]15

Linkers and anchors used in solid phase synthesis
The initial building block of the compound to be prepared by solid phase synthesis is covalently attached to the solid support via the linker. The linker is a bifunctional molecule. It has one functional group for irreversible attachment to the core resin and a second  functional  group for  forming  a  reversible covalent bond with  the  initial building  block  of  the  product.  The linker that is bound to the resin is called anchor.

The anchor can also be considered as a protecting group of one of the functional groups of the final product and, as such, it determines the reaction conditions by which the product can be cleaved from the support. A large variety of the commercially available resins contain the already built in anchor. A series of selected examples are found below.

Merrifield resin:
The  Merrifield  resin  can  be  used  to  attach  carboxylic  acids  to  the  resin.  The product can be cleaved from the resin in carboxylic acid form using HF.

Tritylchloride resin:
The tritylchloride resin is much more reactive than the Merrifield resin. It can be used for attachment  of  a  wide  variety  of   compounds  like  carboxylic  acids,  alcohols,  phenols,  amines, thiols. The products can be cleaved under mild conditions using a solution of tri -fluoroacetic acid (TFA) in varying concentrations (2-50%). 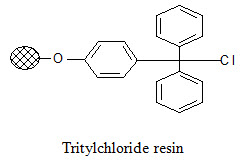 Wang resin:
The resin is used to bind carboxylic acids. The ester linkage formed has a good stability during the solid phase reactions but its cleavage conditions are milder than that of the Merrifield resin.
Usually 95% TFA is applied. It is frequently used in peptide synthesis.

Hydroxymethyl resin:
The resin can be applied for attachment of activated carboxylic acids and the cleavage conditions resemble that of the Merrifield resin.

Aminomethyl resin:
Carboxylic  acids  in  their  activated  form  can  be  attached  to  the  resin.  Since the formed amide  bond  is  resistant  to  cleavage,  the  resin  is  used  when  the  synthesized  products  are  not cleaved from the support; they are tested in bound form.

Rink amide resin:
The  Rink  resin  is  designed  to  bind  carboxylic  acids  and  cleave  the  product  in carboxamide  form  under  mild  conditions.  The amino group in the resin is usually present  in protected  form.   For  attachment  of  the  substrate  first  the  protecting  group  is  removed  then  it is reacted  with  the  activated  carboxylic  acid  compound.  Cleavage of the product in  carboxamide form can be  performed with dilute (~1%) TFA. 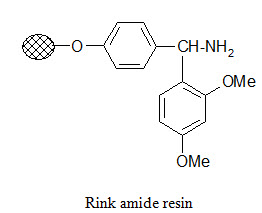 Photolabile anchors:
Photolabile  anchors have  been  developed  that  allow  cleavage  of   the  product  from  the support  by  irradiation  without  using  any  chemical  reagents.  Such anchors, like the 2-nitro-benzhydrylamine resin below, usually contain nitro group that absorbs UV light. 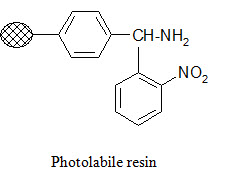 Traceless anchors:
The  initial  building  block  of  a  multi-step  solid  phase  synthesis  needs  to  have  one functional group  (in  addition to others)  for  its attachment  to  the solid support.  It may happen  that in  t he  end  product  t hi s  group  is  unnecessary  and  needs  to  be  removed.  For  this  reason  anchors have  been  developed  that  can  be  cleaved  without  leaving  any  functionality  in  the  end  product  at the cleavage site. These traceless anchors usually contain silicon based linkers.

Protection of amino groups:
* The benzyl carbonyl (Z) group
Bergmann and Zervas suggested the benzyloxy carbonyl group for amino-protection in peptide synthesis in 1932 and this important protection type is still in use. The Z group can be introduced by the reaction of the amino group containing compound with benzylchloro- formate under Schott en-Bauman conditions. 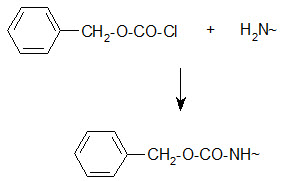 The Z protection is stable under mildly basic conditions and nucleophilic reagents at ambient temperature. Cleavage can be brought about by HBr/AcOH, HBr/TFA or catalytic hydrogenolysis.