INTRODUCTION
Anemia affects the lives of more than 2 billion people globally, accounting for over 30% of the world’s population which is the most common public health problem particularly in developing countries occurring at all stages of the life Cycle. Anemia is a condition that develops when blood lacks enough healthy red blood cells or haemoglobin. Iron deficiency is the most common nutritional disorder in which there is a depleted and a restricted supply of iron to various tissues and which becomes apparent. This may result in depletion  of  Hemoglobin  and  iron-dependent  intra- cellular  enzymes  participating  in  many  metabolic pathways. Plant and plant products are being utilized as a source of medicine since long. Plant extracts are used as phototherapeutics and are still a large source of natural antioxidants. Particularly, flavonoids and phenolics are considered as potential therapeutic agents. In many developing countries, herbal medicines are assumed as greater importance in health care (Mohan, 2005; http://www.who.int/topics/anaemia/en/ cited: 25-08-2017; Tortora, 2015). 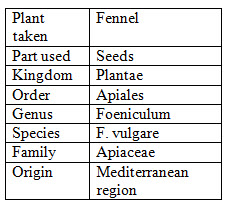 Fig. I - Seeds of Foeniculum vulgare

Preparation of extract
The seeds were collected, shade dried and then converted into coarse powder. The powder was then filled in a Soxhlet apparatus for extraction by 70:30 hydro-alcoholic as a solvent. The Hydro-alcoholic extract was concentrated by vacuum distillation to dry. The collected extract was stored in suitable container and used for further pharmacological studies (Khandelwal 2013).

Animals
Wistar strain male albino rats, weighing 100–150 g were selected for the study. The animals were housed individually in polypropylene cages under hygienic and standard environmental conditions (22 ± 3°C, humidity 30–70%, 12 h light/dark cycle). The animals were allowed to have stan¬dard feed and water adlibtum. They were acclimated to the environment for one week prior to experimental use. All the animal testing were done under the approval of Institutional Animal Ethical Committee (IAEC) of Modern Institute of Pharmaceutical Sciences, Indore the approval no. is IAEC/MIPS/01/2017/02 (Hussain et al, 2017).

Table 2 - Effect of seed of Foeniculum vulgare on haemoglobin, RBC and percentage haematocrit.