ANALYTICAL TECHNIQUES FOR ANALYSIS OF INORGANIC ELEMENTS – A REVIEW 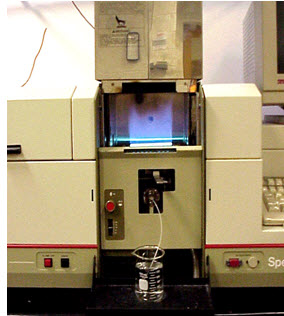 1.Light Source:
The light source is usually a hollow cathode lamp of the element that is being measured . It contains a tungsten anode and a hollow cylindrical cathode made of the element to be determined. These are sealed in a glass tube filled with an inert gas (neon or argon) . Each element has its own unique lamp which must be used for that analysis .

Applying a potential difference between the anode and the cathode leads to the ionization of some gas atoms . These gaseous ions bombard the cathode and eject metal atoms from the cathode in a process called sputtering. Some sputtered atoms are in excited states and emit radiation characteristic of the metal as they fall back to the ground state . The shape of the cathode which is hollow cylindrical concentrates the emitted radiation into a beam which passes through a quartz window all the way to the vaporized sample.

2 . Atomizer
Elements to be analyzed needs to be in  atomic sate.  Atomization is separation of particles into individual molecules and breaking molecules into atoms .This is done by exposing the analyte to high temperatures in a flame or graphite furnace .The role of the atom cell is to primarily dissolvate a liquid sample and then the solid particles are vaporized into their free gaseous ground  state form . In this form atoms will be available to absorb radiation  emitted from the light source and thus generate a measurable  signal proportional to concentration

3. Monochromators   This is a very important part in an AA spectrometer.   A monochromator is used to select the specific wavelength of light which is absorbed by the sample, and to exclude other wavelengths. The selection of the specific light allows the determination of the selected element in the presence of others

4 .Detector  The light selected by the monochromator is directed onto a detector that is typically a photomultiplier tube , whose function is to convert the light signal into an electrical signal proportional to the light intensity.

5. Read out Device The processing of electrical signal is fulfilled by a signal amplifier . The signal could be displayed for readout , or further fed into a data station for printout by the requested format.

AAS APPLICATIONS:
Clinical analysis :  Analyzing metals in biological fluids such as blood and urine.
Environmental analysis : Monitoring our  environment finding out the levels of various elements in rivers, seawater, drinking water, air, and petrol.
Pharmaceuticals. In some pharmaceuticalmanufacturing processes, minute quantities of a   catalyst used in the process (usually a metal) aresometimes present in the final product. By using AAS the amount of catalyst present can be determined.
Industry : Many raw materials are examined and AAS is widely used to check that the major elements are present and that toxic impurities are lower than specified – e g in concrete, where calcium is a major constituent, the lead level should be low because it is  toxic.
Mining: By using AAS the amount of metals such as gold in rocks can be determined to see whether it is worth mining the rocks to extract the gold .Trace elements in food analysis  Trace element analysis of cosmetics ,Trace element analysis of hair. 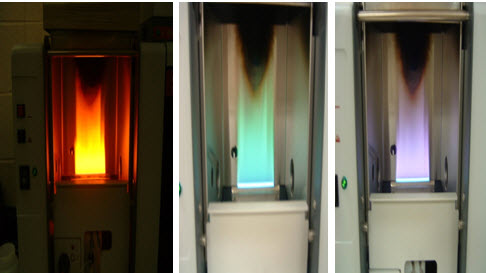 Inductively coupled plasma-atomic emission spectrometry (ICP-AES)
A plasma is hot and electrically conducting gaseous mixture containing enough cations and electrons (though the plasma has a neutral charge overall) to maintain the conductance.

The ICP is an argon-based, radio frequency plasma & input rf frequency is either 27 or 40 MHz at powers from 1 to 2 kW.  The temperature in the central analyte channel ranges from about 6000 to 8000° K.

At these temperatures most elements are largely atomized and ionized, these emit characteristic radiation.