ABSTRACT
This review mainly focus on targeted drug delivery to the colon is extremely desirable for local treatment of inflammatory bowel disease such as ulcerative colitis, crohn's disease, amoebiasis, colonic cancer as well as for systemic delivery of protein and peptide drugs. The colon is a site where local delivery allows topical treatment of inflammatory bowel disease and systemic delivery of drug can take place. Treatment of colon can be made effective if the drug can be targeted directly into the colon because drug release and absorption should not be take in abdomen and the small intestine and bioactive agents should not be degraded and to allow drug release into the colon. Drug targeting to the colonic area is not only associated with the treatment of colonic ailment locally but also delivering drugs such as protein and peptide for their systemic effects which are degraded and bioavailability is very depressed due to the instability in the GI Tract.

INTRODUCTION
Colon targeted drug delivery system may be following the concept of control or sustained route for drug administration has received more attention (Vinay et al., 2012). At least 50% of the dosage forms available in the market are oral dosage form because these system have more advantage due to high patient compliances (Akhil et al., 2011)   Targeted dreg delivery into the colon is highly desirable for local treatment of a variety of bowel disease. Like crohn's disease, colonic cancer ulcerative Colitis, amebiosis and many others disorders ((Anil and Betty, 2010). Colon targeted drug delivery system is not only the suitable for delivering the drug to the colon for local treatment but it is also a preferable approach for delivery of protein and peptide and enhance their bioavailability (Amidon et al., 2015). Bioavailability of protein and peptide may  be  achieved if it can be protected  form acid and enzymes in the stomach and upper  intestine and  released and absorbed in  the colon and protect it form degradation in stomach (Prasanth et al., 2012). Degradation of such drug in stomach can be prevent by using some polymer either alone or in a combination because polymer effect the rate of release and absorption of drugs  and play an important  role in formulation of colon targets drug delivery system (H. Rajpurohit et al., 2010). Oral route is the more preferable and convenient route but other routes for colon drug delivery system may be used. Administration of drug through the rectum offers the shortest route for targeting drugs to the colon still reaching the colon proximal part via rectal administration is difficult. Rectal administration  is difficult and painful for patient thus patient compliances decreased (Massimo Campieri et al., 1992). Colon contain a variety of bacteria which is responsible for azo reduction and enzymatic cleavage which is responsible for the metabolism of many drugs (Sai Mansa et al., 2015)

Choice of polymer for CTDDS
Delivery of drugs to the colon lead on much interest for local and systemic treatment of variety of colonic disease because of various therapeutic advantage of colon like near neutral and longer transit time. Advantageous delivery of a drug to the colon depend upon protection  of the drug from degradation  or release in the stomach which can be achieved by using polymer because polymer can influence the rate of release and absorption of drug and have an important role in formulating CTDDS. Both natural and biodegradable polymers are preferred for drug delivery application. The advantage for natural and biodegradable polymers are-
a) In expensive and available in variety of structure.
b) Biodegradable polymers are broken down into biologically acceptable molecules that are metabolized and removed from the body via normal metabolic pathway.
So that the choice of polymer for formulating colon targeted drug delivery system is playing a vital role. (H. Rajpurohit et al., 2010); ( Neha Sharma and harikumar,2013)

Advantage of CTDDS over Conventional Drug
• Colon have less peptidase activity so peptides, insulin oral vaccines, growth hormones can be delivered through this route (Shruti, 2007).
• Colon is ideal site for the delivery of agents to treat  the local disease  of the colon (Mahesh,2014)
•  Required small drug quantities due to locality targeting (Akhil, 2011).
• Reduces dosage frequency Hence lower cost of expensive drugs.
• Possible leading to a reduced incidence of side effects and drug interactions.
• The colon is an attractive site where poorly absorbed drug molecules may have an improved bioavailability.
•  Reduce gastric irritation caused by many drugs like NSAIDS.
• Bypass initial first pass metabolism.
• Extended daytime of night time activity.
• Improve  patient compliance.
• It has a longer retention time and appears  highly responsive to agents that enhance the absorption of poorly absorbed drug (Mahesh et al.,2014); (N.K. Jain, 2001); (M. Halsa,2001); (Rennat,1998;)

Limitation of Colon targeting drug delivery system-
•  Multiple manufacturing steps.
• Incomplete release rate.
• Bioavailability of drug may be low due to potentially binding of a drug in a nonspecific way to dietary residue, fecal matter, mucus and intestinal secretion.
• The resident micro flora could also affect colonic performance via metabolic degradation of the drug.
• Non availability of an appropriate dissolution testing method to evaluate the dosage  form in-vitro (Akhil et al., 2011); ( Sukhbir et al.,2013).
• Drug should be in the solution form before absorption and there for rate limiting step for poor soluble drugs.
• An important limitation of the PH sensitive coating technique is the uncertainty of the location and environment in which the coating may start to dissolve. Normal in the patient with ulceration colitis (M.K. Ratnaparkhi et al., 2013).
• Limitation of pro-drug approach is that it is not very versatile approach as it's formulation depends upon the functional group available on the drug moiety for chemical linkage.(Gaurav et al., 2010).

TABLE No. 01-Colonic diseases, its sites and active drug components. (Danda and chandan, 2013) 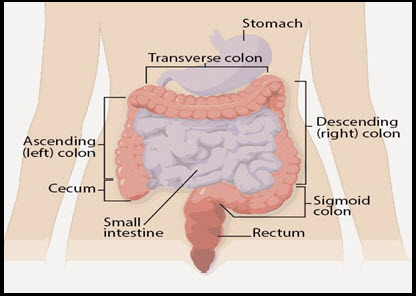 Diagram 01- Colon
The digestive system is the collective name used to describe the alimentary canal, its accessory organs and a variety of digestive process. The alimentary canal begin at the mouth, passes through the thorax, abdomen and pelvis and ends at the anus.
The large intestine is about 1.5 meters long, beginning at the caecum in the right iliac fossa and terminating at rectum and anal canal deep in the pelvis. Human large intestine is about 1.5 meter long. the colon is a cylindrical tube which is linked by moist, soft pink lining called mucosa. The colon has four parts which are same structure and function.

Table No. 02- Length of Various Parts of Large Intestine.

Factor affecting Colon targeted drug delivery system:-
The factors that affect the Colon targeting are categorized in two categories:-
1) Physiological factors
2) Pharmaceutical factors
1) Physiological factors:-
The factor which involve physiologically in drug delivery and responsible for affecting the targeting of drug to the colon are:-
a)    Gastric emptying (Danda and chandan, 2013)
Drug delivery to the colon upon oral administration depend mainly on gastric emptying and bowel transit time i.e. upon reaching the colon the transit time of drug depends on the nature and size of the particles. Larger particles have less transit time as compared to smaller particles.

b) pH of colon
The pH of the Gastrointestinal tract is subjected to both inter and intra subject variation. Disease state, Diet and food intake influence the pH of GI Tract. This changes in the pH in different parts of GIT is the basic for the development of Colon targeted drug delivery systems. Coating with different polymers is done to target the drug to the site. (M. Prathap et al., 2014)

C) Colonic micro Flora and enzymes  (Cynthia and Wendy, 2015); (Danda andChandan, 2013); (M. Prathap et al., 2014)
The Gastrointestinal Contain a variety of microorganism that produces many enzymes need for metabolism. Growth of this micro flora is controlled by the GIT Contentment's and peristaltic movements. The enzyme released by different microorganism E. Coli, Clostridia, Lactobacilli, Eubacteria, Streptococci are responsible for the various metabolic reaction that take place in GIT.