A NEW TYPES OF POLYMORPHIC FORM OF 10-PROPARGYL-10-DEAZAAMINOPTERIN, FROM SL: AS A REFRACTORY PERIPHERAL T-CELL LYMPHOMA DRUG

ABSTRACT
A new crystal form of 10-Propargyl-10-Deazaaminopterin, form SL, was discovered which is thermodynamically stable, shows long term stability and is applicable for using in final dosage forms. Form SL was characterized by several analytical methods such as thermal analysis by DSC, IR, X-ray powder diffraction, SEM (Scanning Electron Microscopy), Digital optical microscopy and solubility/dissolution measurements. Active pharmaceutical ingredients should be stable during technological processes for the preparation of a final dosage form and must also remain stable during storage. The morphology of long needle and plate shaped crystals was investigated by scanning electron microscopy (SEM) and optical microscopy. Form SL was compared to other forms of 10-Propargyl-10-Deazaaminopterin such as form A, B, C and to the amorphous form. The thermodynamic stability of form SL is supported by its long-term stability. Form SL is a pharmaceutically applicable crystal form.

INTRODUCTION
Pralatrexate or 10-Propargyl-10-Deazaaminopterin is the generic name of the compound (2S)-2-[[4-[(1RS)-1-[(2,4-diaminopteridin-6-yl)methyl]but-3ynyl]benzoyl]amino] pentandioic acid Fig.1 which belong to the field of pharmaceutical agents for the treatment of patients with relapsed or refractory peripheral T-cell lymphoma. 10-Propargyl-10-Deazaaminopterin (Pralatrexate) is an antifolate and acts as an inhibitor of dihydrofolatereductase. 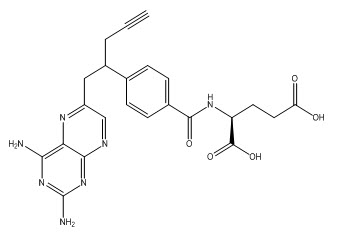 A New polymorphic form of a pharmaceutically useful compound also provides an opportunity to improve the performance characteristics of a pharmaceutical product. Discovering different polymorphic forms of a pharmaceutical product can provide materials having desirable processing properties, such as ease of handling, processing and purification, storage stability. It enlarges the choice of materials that a formulation scientist has available for formulation optimization, for example by providing a product with different characteristics, e.g. better processing or handling characteristics, improved dissolution profile, or improved shelf life. The synthesis of the compound was first described in the 1993’s. (DeGraw et al., 1993) Sirotnak et al. reported disclosed 10-Propargyl-10-deazaaminopterin substantially free of 10- deazaaminopterin. (Sirotnak et al., 2000) Gijsbertus J. Pronk reported pure diastereomers of 10-propargyl-10-deazaminopterin, or a salt thereof, wherein the diastereomer may be either (2S)-2-[[4-[(1S)-1-[(2,4-diaminopteridin-6-yl)methyl]but-3-ynyl]benzoyl]amino]pentanedioic acid or (2S)-2-[[4-[(1R)-1-[(2,4-diaminopteridin-6-yl)methyl]but-3-ynyl]benzoyl]amino]pentanedioic acid.
(Gijsbertus J, 2011). The Polymorphs with different crystalline characteristics have become the subject of extensive solid-state studies over the past few years, primarily due to their potential impact on the development of active pharmaceutical ingredients and the final dosage form. (Carstensen, 2001). An active pharmaceutical ingredient in the final dosage form and to control the manufacturing process, both polymorphism and pseudo-polymorphism should be investigated during the pre-formulation phase of the development in order to assure the right bioavailability and stability of API. (Morris, 1999). Occurrence of different crystal forms of same substance i.e. polymorphism, is a property of some molecules and molecular complexes. A single molecule for e.g. 10-Propargyl-10-Deazaaminopterin, may give rise to a variety of polymorphs having distinct crystal structures and physical properties like XRPD pattern, melting point, TGA, DSC and infrared absorption spectrum. Different polymorphic forms of a compound can be distinguished by using one or more of these techniques.

I discovered a new crystalline polymorphic form of Pralatrexate, form SL, which is thermodynamically stable, shows long term stability and is applicable for using in final dosage forms. Form SL was characterized by several analytical methods such as thermal analysis by DSC, IR, X-ray powder diffraction, SEM (Scanning Electron Microscopy), Digital optical microscopy and solubility/dissolution measurements. Active pharmaceutical ingredients should be stable during technological processes for the preparation of a final dosage form and must also remain stable during storage.

For convenience, a perspective drawing together with the different atomic molecular structure is depicted in Fig. 2 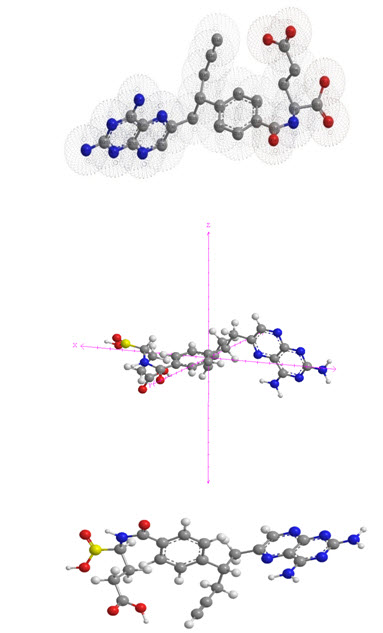 Figure 2. The molecular structure of Pralatrexate in X, Y and Z axis plane.

MATERIAL AND METHODS
Pralatrexate as a starting material for crystallization studies is a semi-solid, pitchy, oily or amorphous material. It was prepared by chemical synthesis and purified using chromatographic methods. Form A, B and C was novel procedure described in WO 2012/061469. (Tiseni, 2013) According to these procedure amorphous Form A, B and C was prepared by dissolving pralatrexatein formamide at room temperature. The solution was poured into water at room temperature resulting in the formation of a precipitate. The precipitate was filtered off and dried in a vacuum drying oven at 35°C under vacuum for 18 h, furnishing pralatrexate Form A (200 mg, 50% yield, 96% purity).

Thermal analysis:
Thermal Analysis DSC was performed on a Mettler DSC821e. The sample (4–6 mg) was placed in an unsealed aluminum crucible with a hole and heated in an N2 atmosphere at a heating rate of 5 K/min in the temperature range from 30 °C to 200 °C. Indium was used to calibrate the instrument.

FT-IR Spectroscopy:
FT-IR spectroscopy was obtained on FT-IRspectrometer and the infrared spectra were recorded within the wave number range of 4000–400 cm–1 with a Perkin Elmer FT-IR spectrometer at a resolution of 2 cm–1. Dry KBr (50mg) was finely ground in an agate mortar and sample of the drug (1-2 mg) was subsequently added and mixed gently.

X-Ray powder diffraction:
The powder x-ray diffraction patterns were obtained using a Panalytical X’Pert PRO diffractometer with an X’Celerator detector (RTMS; Real Time Multiple Strip) using CuKα radiation (tube operating at 45 kV and 40 m-A) in the Bragg-Brentano (reflection) geometry. Data were recorded from 2 to 40° 2θ in steps of 0.033° 2θ with a measurement time of 50 seconds per step. Variable divergence and antiscatter slits were used to maintain 10 mm of sample length irradiated. Major diffraction peaks were extracted from the diffraction patterns using X’Pert High-Score Plus 2.0 software.

Scanning Electron Microscopy:
A Jeol JSM-6100 scanning electron microscope was used to obtain photomicrographs of 10-Propargyl-10-Deazaaminopterin and its crystal modifications. Electron images of crystals were obtained using a scanning electron microscope (Jeol JXA-840A) operating at 18 kV. The magnification was 500X. The specimens were mounted on a metal stub (with double-sided adhesive tape) and coated with gold under vacuum prior to observation.

RESULTS AND DISCUSSION
Polymorphic Screening:
Five crystalline forms were screened from saturated solutions of 10-Propargyl-10-Deazaaminopterin (Form SL) which were prepared by heating in different solvents and solvent mixtures under constant stirring until most of drug has dissolved; the solutions were filtered and kept at room temperature until crystallization was complete.

Dsc Thermograms:
Fig. 3 shows DSC thermograms of the crystal forms and amorphous form of Pralatrexate. There are no endothermic peaks at temperatures below the melting points. It can be easily concluded from the DSC analysis that the crystal forms of Pralatrexate are unsolvated forms. The melting points and the melting enthalpies were obtained from the DSC thermograms and are presented in Table 1.

Table.  1  Melting points and enthalpies of the crystal forms of Pralatrexate 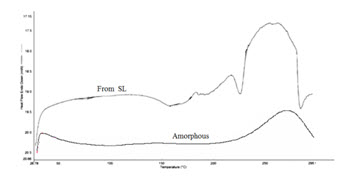 Figure. 3 DSC thermograms of amorphous and SL forms of Pralatrexate.

Due to differences in sample purity, particle size distribution, and the presence of residual solvents cause some variations and broadening of the melting range. Form SL has the highest melting point and amorphous form the lowest. Form SL is thermodynamically the second most stable form of Pralatrexate. A wide endothermic peak at the temperature above the melting point shows the decomposition of Pralatrexate.

FT-IR Spectroscopy:
FTIR has been successfully used for exploring the differences in molecular conformations, crystal packing and hydrogen bonding arrangements for different solid-state forms of organic compounds. 10-Propargyl-10-Deazaaminopterin (I) crystalline Form-SL shows IR absorption spectrum and it is  characterized by peaks expressed in cm-1 at approximately 3294 cm-1, 3205 cm-1, 2114 cm-1, 1645 cm-1, 1555 cm-1, 1538 cm-1 and 1499 cm-1 is shown in Fig. 4 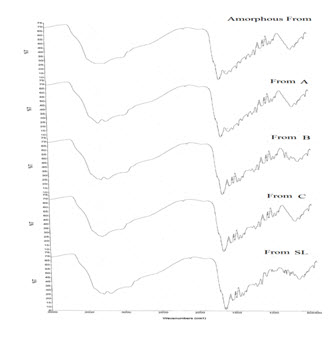 Figure 4. FTIR of Form A, Form B, Form C and Form SL of Pralatrexate